(RNS) — The New York Times is lately obsessed with Catholicism. As it happens, so am I.

Thus, I always take note when the paper (website?) of record gives voice to this or that “traditional” Catholic, often to publicly deplore Pope Francis’ latest doctrinal opening or cheerlead some social-conservative victory (without mentioning, increasingly, that Donald Trump made it possible).

Usually I interpret the left-leaning Times’ inclusion of right-wing Catholic voices as a nod to diversity. But maybe there is more going on.

This week, the Times ran a thoughtful, if slightly misbegotten, essay under the unfortunate headline “New York’s Hottest Club Is the Catholic Church.”

Its author, Julia Yost, an editor at First Things magazine, adds to a growing body of Gothamite media commentary on a downtown set of dissidents from progressive orthodoxy. Young and attractive, many are employed in artistic, philosophical or writerly pursuits often associated with inherited wealth. Yost identifies them as denizens of “Dimes Square,” a neighborhood the Daily Beast has described as “the infamous headquarters of a hyper-specific, hyper-online scene of overeducated young tastemakers.”

RELATED: Could Catholic moral theology light the way for a new GOP?

Unlike their more sternly ideological millennial elders, who tend to be self-styled meritocrats that married well, members of the “Dimes Square” crowd have famous friends but don’t take themselves too seriously. The media noticed them in part because they had parties in 2020 while the Brooklyn scolds were complying with lockdown orders.

Yost argues, “the ultimate expression of this contrarian aesthetic is its embrace of Catholicism.” More surprisingly, Yost paints a picture of this scene as one that could revitalize American Catholicism.

This all catches my attention because if I were 25 and childless, I would find this crowd irresistible. A Southerner with crippling status anxiety, I’ve never fit in with uptown elites of the right or left, but as a longtime Catholic-curious moralist and unconventional political thinker, this would be my New York.

Those same credentials, however, mean that I bristle at Yost’s associating Catholicism with words like “trend,” “hot” or “scene.” Wrestling with the apparent inauthenticity of the Dimes Square Catholics’ faith, Yost vows that they can give Catholicism a lift “whether the new faithful are performing an act of theater or not.” 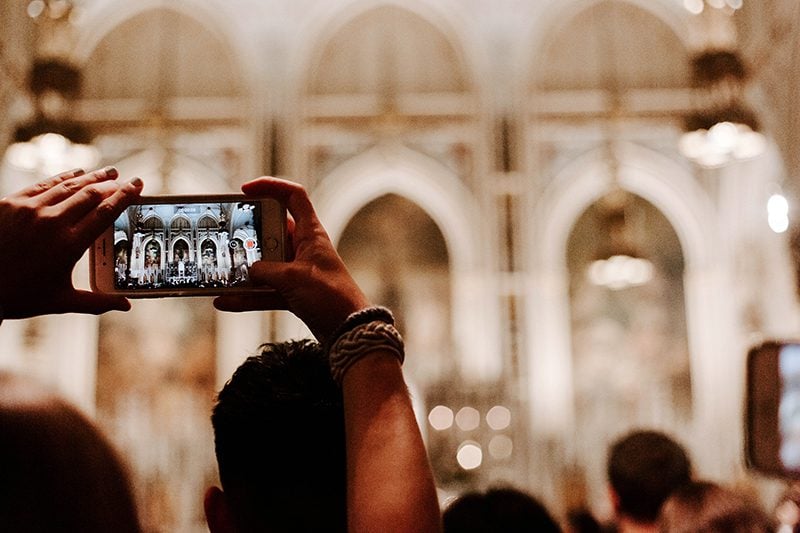 I’m not surprised that Yost is peddling this kind of reasoning — what conservative Catholic could fail to be dazzled by cool, moneyed Zoomers who are attracted to the church? What makes me wonder more is why the Times so regularly promotes scenes of selectively rigorous Catholicism. Is it one Times editor’s singular obsession, or a passing curiosity that has inflicted multiple editors exactly once?

Two years ago, the Times magazine published a long piece (by sometime Religion News Service contributor Tara Isabella Burton) about “weird Catholic Twitter,” an online branch of the church Burton called “equal parts traditionalism and, well, punk.” (And Protestantism: Many of the adherents of traditional Christianity Burton mentioned turned out to be Episcopalians.)

The Times has also signed up the cranky Matthew Walther as a contributing op-ed writer. The editor of the Catholic magazine The Lamp, Walther has pushed the idea that “the church’s social teaching … might inform a future large-scale political realignment.” It’s a sweetly communitarian commitment that most right-wing Catholics are happy to ignore.

Making its own in-house, conservative Catholic and Pope Francis critic, Ross Douthat, look hopelessly passé, the Times has published Michael Brendan Dougherty, who declared that “Pope Francis Is Tearing the Catholic Church Apart” and once tweeted that he would rather his children be raped by Jesuits than educated by them.

None of these takes appeal to lost souls like me, who have quietly pondered the church in all her mystery, beauty and truth. Few people convert to Catholicism because it’s trendy, or leave because it has become hopelessly modern. (Many more leave because the church refuses to accommodate contemporary ideas about feminism, sexuality and psychology of sin.)

Yost argues, perhaps correctly, that what draws these young Manhattanites-on-the-make is Catholicism’s moral stringency. And maybe this moral seriousness, largely devoid of ideology, is what The New York Times finds interesting, especially when so many established Catholic writers, whether cradle or convert, fit so seamlessly within the highest echelons of leftism or Trumpism.

But these purported saviors of Catholicism don’t always seem any more serious about notions of sin and grace as objective moral realities than their secular peers. Columbia MFA candidate Anika Levy tells Yost her attachment is “mostly aesthetic,” adding, “I don’t think anybody downtown is in a state of grace.”

Rome, packaged as a trend item for the trust-fund literary set or as a performative subversion of wokeness by reactionaries, may sell papers, but it will never win converts.