(RNS) — Based on what I am seeing on Facebook, there is a new political trend afoot among my friends on the center-left.

They are posting memes that proclaim “Cheney 2024!”

I reached out to one of my neo-Cheneyite friends.

“Are you crazy? Are you aware of Liz Cheney’s political positions?” For example:

“You do understand, don’t you? Let’s be clear, Liz Cheney is a conservative Republican.”

In fact, in terms of her voting record, she came close to being the “Trumpiest” member of Congress.

My friend pauses, and takes a deep breath, and responds.

“I hate everything that she believes in. But, here’s the thing about her.

“Yes, she believes in what Trump believes in. But, she is anti-Trump. She has pledged to ‘do whatever it takes to ensure that Donald Trump is never again anywhere near the Oval Office.’ That takes integrity.”

Like my friend, I disagree with Liz Cheney’s political positions.

But there is something about her.

As much as I disagree with her, I trust her.

Why? Because she has demonstrated a quality that is so rare in American politics today — perhaps, also, in American life — that we cannot help but find that quality to be attractive.

Funny word, integrity. It comes from the word “integer,” as in a numeral. It is related to such words as “integral” and “integration.”

What does “integrity” really mean? It means “one.” As in: being one person, being whole, being who you are in all circumstances. The Hebrew phrase tocho k’voro comes to mind — what is inside is what is outside. It is why the ancient ark in the Tabernacle was covered with gold both on the outside and on the inside.

We can understand why there might be gold on the outside, but why on the inside? The Talmud (Yoma 72) says: A person’s outward appearance should be like their inside nature. In other words, be real.

A little more. This week’s Torah portion lists the animals that are permitted for consumption, and those that are forbidden — the basic laws of kashrut.

A land animal must have both split hooves and chew its own cud. Which brings me to why pigs are not kosher. True, they have the outer manifestations of a kosher animal — split hooves. But, they lack the inner part — chewing their cud. 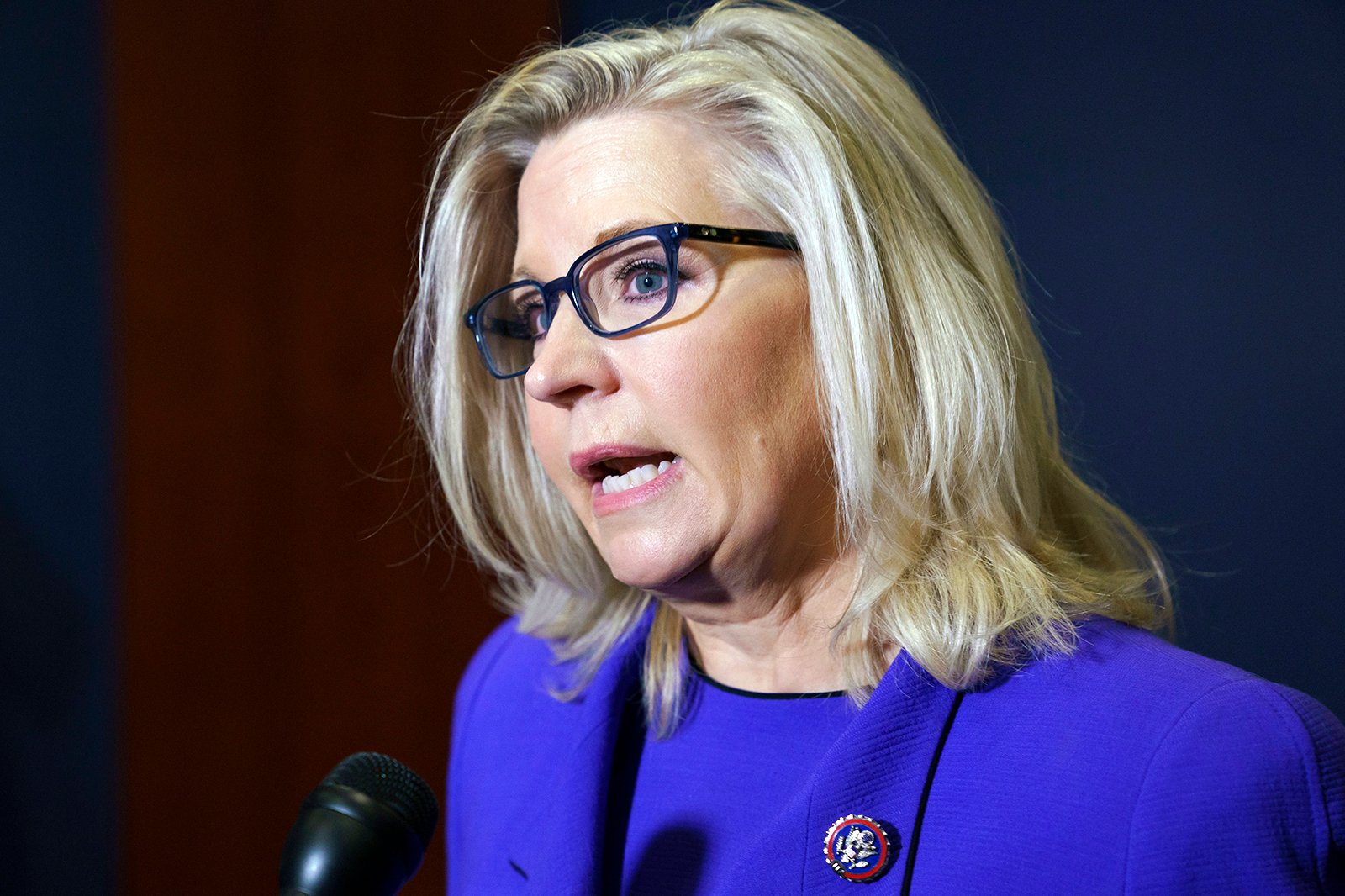 Rep. Liz Cheney, R-Wyo., speaks to reporters at the Capitol in Washington on May 12, 2021, after House Republicans voted to oust her from her leadership post as chair of the House Republican Conference because of her repeated criticism of former President Donald Trump for his false claims of election fraud and his role in instigating the Jan. 6 U.S. Capitol attack. (AP Photo/J. Scott Applewhite)

That is the thing about Liz Cheney. She believes in truth. As in, emet — what the ancient sages said is the very seal of the Holy One of Being. She’s real.

You will ask: Aren’t other right-wing conservatives “real”?

Yes, they are. Often, frighteningly so.

When I see Liz Cheney, I feel that I am in the presence of an American patriot. True, I disagree with her. But I know we would have a respectful conversation. Like I said, I trust her.

Liz Cheney makes me think of one of the later verses of “America the Beautiful” — the ones that we rarely sing, but which I think are among the finest lyrics to ever appear in a patriotic song.

O beautiful for heroes proved
In liberating strife,
Who more than self their country loved
And mercy more than life

The verse might have been referring to American heroes who proved themselves in military battle. They loved their country more than they loved their own lives. That is the meaning of sacrifice.

Liz Cheney exemplifies those words as well. When she led a principled fight against Donald Trump, she knew she was sacrificing her run for reelection. “Nevertheless, she persisted.”

My Cheney-philic friends are drawn to Liz Cheney’s political courage and her willingness to throw herself under the political bus for a larger principle. She, almost alone of all Republicans, was willing to call out Trump for what he had done to this country.

In this sense, she was channeling just a little bit of that old Hebrew prophetic temperament. That is what biblical prophets did — they challenged and rebuked kings, as Nathan did to King David, and as Elijah did to King Ahab. When Nathan rebukes David, however subtly, regarding the seduction of Bathsheba and the killing of her husband, Uriah, he says to the king (in good King Jamesian English): “Thou art the man!”

That is precisely what Liz Cheney has been saying to Trump. “Thou art the man!”

For that is the precise Hebrew translation of “integrity” — yoshrah. It comes from the word yashar — to be straight, upright, honest. The word is even found in the name of the Jewish people — Yisrael, yashar-el — the one who tries to be upright and honest before God.

Would I like to see Liz Cheney as the Republican candidate for president? It would be highly unlikely. But, her (fantasy) presence on the ticket would be redemptive. It would show us that American patriotism is alive and well — and not merely in the vulgar, jingoist, xenophobic sense.

If you look at that list of Cheney’s political positions, you will notice that, in some cases, she changed her mind.

Imagine that — she changed her mind.

That, too, is significant and even crucial. The ability to reflect and reconsider and reconfigure is a precious human and political commodity.