CHICAGO (RNS) — ­­­Like so many pastors around the United States, the Rev. Amanda Olson has kept one eye on the Bible and another on the evolving religious landscape.

She knew change was coming to the church in America.

Yet she hoped her congregation might be spared the worst of it.

“Everyone thinks that churches are going to close,” said Olson, the longtime pastor of Grace Evangelical Covenant Church on Chicago’s North Side. “But nobody thinks it is going to be their church.”

For more than a century, the small congregation at Monticello and Berteau avenues in Chicago had proved resilient, ready to adapt to the many changes that came their way. In the early 1900s, the church switched from Swedish and began worshipping in English, in order to make a younger generation feel more welcome. When the church building burned down on the morning of Jan. 28, 1940, members met the next day in the parsonage across the street and made the decision to rebuild.

In the 1960s, when the congregation, then known as Irving Park Covenant Church, had shrunk to only a handful of people, it merged with another small church and relaunched as Grace. Another revival followed in the late 1990s, when the then-aging congregation, afraid the church might close, welcomed a young pastor and a group of young families who helped it find new life.

The church during those years was always a place of welcome. When a small Hispanic church, led by a former political prisoner from Chile and his wife, needed a place to worship, Grace welcomed the group in. When young men from Sudan arrived in Chicago from a refugee camp and needed help resettling, the church welcomed them as well. More than a decade ago, the church launched Fed by Grace, a food pantry that became a lifeline to the community, staffed by church members and neighborhood volunteers working side by side. And for years, the church was home to students from a nearby seminary, a place where they could find community while getting a taste of real-life ministry.

The church never became huge — at its peak it was close to 175 people. It was never perfect, but it was a place filled with life and love and grace.

Yet all good things come to an end. This past Sunday, Aug. 28, was the church’s final service.

In early August, church leaders sent out a letter with news that was hard to receive but not unexpected. “It is with sadness that we inform you that our congregation has voted to close the church,” they wrote.

RELATED: Thousands of churches close every year. What will happen to their buildings?

The story of Grace’s closing was like many other churches’.

A 2021 study from Lifeway Research, based on data from three dozen denominations, found that 4,500 churches closed in 2019, while only 3,000 were started.

Twenty years ago, the average congregation in the United States had 137 people, according to the Faith Communities Today study. Today, that number is 65, or about the size of Grace.

When churches get that small, there are just enough people to keep things going — to lead worship, to teach Sunday school, to greet, to volunteer at ministries like the food pantry — but little margin. And not enough people to invest the time and energy needed to make things new.

Right before the pandemic, Grace was drawing about 40 people, said longtime church member Steve Dawson, a former denominational leader. Dawson said that churches in Grace’s denomination had declined by an average of 31% during COVID-19.

Added to the decline at Grace was a sense of weariness, he said.

“People did not get a sense that Grace was going anywhere,” Dawson said.

Along with the broader trend of decline facing churches, Grace experienced its own challenges. In recent years, students who had once flocked to Grace had found other churches to worship in, or did their education back home rather than moving to Chicago. Young people who had grown up in the church moved away and there were fewer families with children left. Congregants sing during the final service at Grace Evangelical Covenant Church on Aug. 28, 2022, in Chicago. RNS photo by Bob Smietana

COVID-19 also took its toll. Some church members, now free to work from home, had moved away to be closer to family. And for more than two years, the church worshipped in small groups while gathering occasionally for Sunday service.

“The first year was great,” said Olson. “We had more people in small groups than had come to worship services before the pandemic.”

But the second year of the pandemic took its toll. Church members longed to be back together but wanted to keep people, especially older members, safe from COVID-19. Some church leaders wondered if meeting in smaller groups might be a way to reinvent the congregation’s ministry for the future.

In the end, the congregation could not find a way forward they could all agree on.

“When you are a small congregation you have to move forward together,” she said.

As a pastor, Olson felt an urgency to help the church reinvent itself. But she also wanted to care for the people in the church who were worn out. Eventually, the congregation voted to close and to give its resources to their denomination, to be used to start new churches.

The decision was painful, even if they agreed it was the right thing to do.

For years the congregation has seen itself as a sending church — a place where aspiring pastors and missionaries had been nurtured and trained before leaving for other ministries. Church members knew the students and former members were going out to do great things. But they were missed.

“Every time somebody left, it hurt,” Dawson said. “This is different — this is everybody leaving. We are the ones being sent.”

Among those who spent years at Grace was the Rev. Tammy Swanson-Draheim, who was recently elected president of the Evangelical Covenant Church, Grace’s home denomination.

Swanson-Draheim preached her first sermon at Grace while in seminary, at the invitation of then-pastor Deb Gustafson. Before coming to Grace, Swanson-Draheim had served at a church but never saw herself as a senior pastor. But that changed while at Grace, where Gustafson was a “gracious and winsome leader” who set an example of what a woman pastor of a thriving congregation could be, said Swanson-Draheim.

She also got to see what ministry in action looked like.

“You got to experience the joy of being a part of it,” she said. 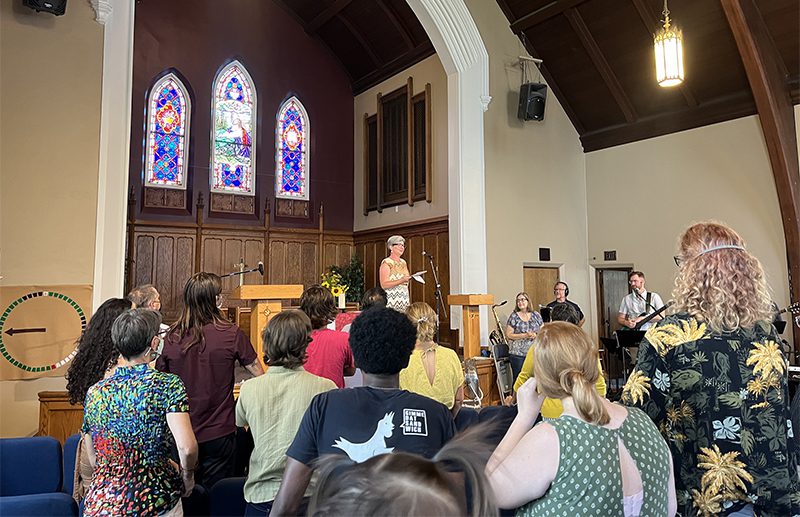 The Rev. Amanda Olson speaks during the final service at Grace Evangelical Covenant Church on Aug. 28, 2022, in Chicago. RNS photo by Bob Smietana

During Sunday’s service — part celebration, part commemoration — Olson told the congregation that the mission of Grace was not ending, even though the church had closed. She said the church could have “buckled down and anted up” and fought to survive for a few more years. But the congregation was tired and weary, she said, and wanted more than survival.

The church property will be sold, she reminded church members, and the funds from that sale would go to help other ministries in the community and to start new congregations.

“This is not failure,” said the Rev. Danny Martinez, a denominational leader who will oversee the sale of the property. He said there were already five new congregations waiting for funding in the area, and the sale would help bring them to life.

For Olson and the congregation, the day was filled with joy and tears. There were video greetings from former pastors and seminarians who once called the church home and stories of the church ministries over the years. In conversations before and after the service, worshippers greeted old friends, like the Rev. Stuart McCoy and his wife, Holly, who had helped revitalize the church in the 1990s, and recalled departed congregants like Nina Larson, who in her 90s would tell younger church members of how she’d attended the church all her life —having started to come to church when she was a baby in the womb. 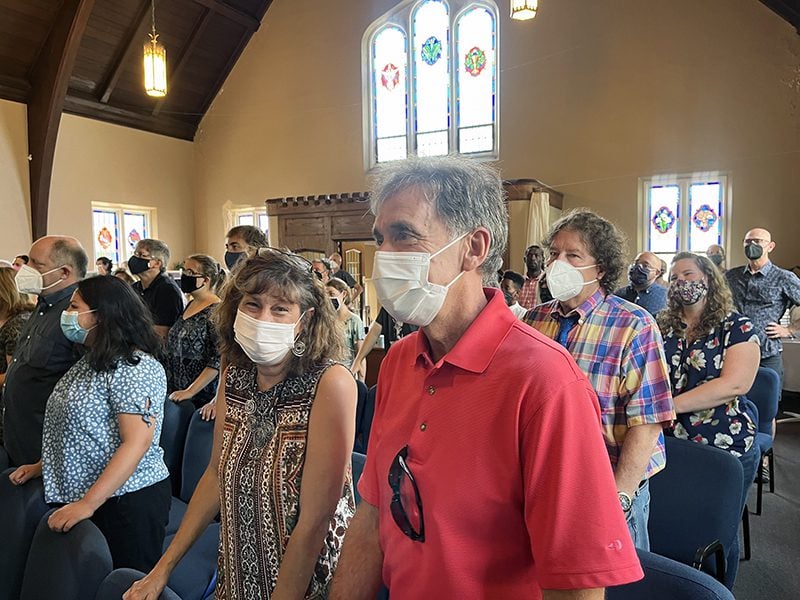 Larson, who had been the ninth of nine children, had often recalled the story of the church fire in the 1940s, saying it was the biggest event in the congregation’s history, as almost the whole neighborhood had turned out to see what was happening.

During the service, Olson reminded worshippers of all they had to be grateful for — and told them God was not done with them.

“No one wants to close a church,” she said. But closing, even though it was hard, was the right thing. The death of a church is not the end of the story, she assured the congregation.

“The reality is that we cannot experience resurrection, friends, without first having the courage and the guts to face death,” she said.

And after the resurrection, she added, there would be work to do.

Editor’s note: Bob Smietana, RNS national writer, was a longtime member of Grace Covenant Church. He wrote about the church in his new book, “Reorganized Religion.”