CHICAGO (RNS) — When the Daughters of St. Paul received permission from Chicago’s then-Cardinal John Cody to open a bookstore in downtown Chicago in 1979, they hurried to make it happen in time for Pope John Paul II’s visit to the city later that year.

By the time the pope’s motorcade drove down Michigan Avenue that October, the first floor of an old storefront had been successfully converted into Pauline Books and Media, and the pope’s books lined the front windows. Above the display the sisters unfurled a huge banner across the front of the building: “We love you, John Paul II.”

Over the next four decades, the store — formerly a haberdashery that had once welcomed the likes of Liberace, Muhammad Ali and former Chicago Mayor Richard J. Daley — would become legendary in its own right.

The decision to close the location, steps from iconic landmarks like Millennium Park, came much more slowly. 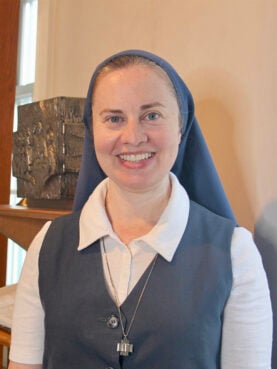 After six years of prayer and outside consultation, and a shove from the COVID-19 pandemic, the order has decided to reconfigure its presence across the United States and Toronto, according to Sister Tracey Matthia Dugas, director of Pauline mission advancement. That means closing four locations in the U.S., including the Chicago book center and the convent above it.

“Technology shifts often, and our mission demands that we use the most modern and efficacious means (to reach out to people),” said Dugas, 50, who has been stationed in Chicago since 2018.

The Chicago sisters celebrated a closing Mass over the weekend at the nearby Assumption Catholic Church.

The book center will close Sept. 24; the convent on the three floors above it, soon after. Two of the four Chicago sisters are bound for the mother house in Boston; the other two for St. Louis, according to Dugas. Other closing locations include Honolulu; Charleston, South Carolina; and San Antonio, Texas. Those closings will impact another 11 sisters, who will relocate to remaining locations by early 2023.

The Daughters of St. Paul have about 120 sisters across 13 locations in the United States and Toronto. In total, about 1,900 sisters, affectionately known as the “Media Nuns,” serve in more than 50 countries around the world, according to the order’s website.

Founded in Italy in 1914 by the Rev. Giacomo Alberione and Sister Thecla Merlo, the Daughters of St. Paul are missionary sisters who strive to “bring Christ to the world through the most effective means of communication.”

That includes books, choral recordings, documentaries and even Twitter feeds. The order’s bestselling “memento mori” series, written by Sister Theresa Aletheia Noble, began as daily reflections she posted on Twitter over the course of a year, inspired by a skull that she kept on her desk.

The nuns’ other lively social media accounts and blogs bear names like “@nunblogger” and “Hell Burns” — the latter, by Sister Helena Raphael Burns. 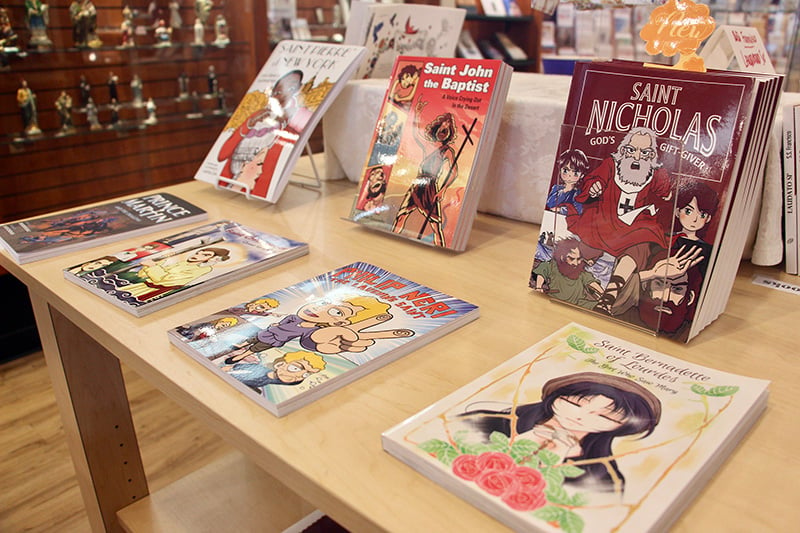 But people aren’t shopping in bookstores like they used to, nor are they joining religious orders. When Dugas was discerning her vocation, she said, the order welcomed two or three new members every year. Now it’s half that.

And “every mission territory is dangerous,” Dugas said — including social media. She’s taking a break from her own online presence after realizing she was having a hard time hearing her own thoughts over the constant loop of trending audio.

Nonetheless, the sisters want to focus on growing their digital platforms, according to an FAQ on the order’s website

“I’ve always enjoyed keeping up with the latest apps and social media, so when I saw what an incredible opportunity TikTok is, I jumped on it,” Davis said in an email to Religion News Service.

“As Daughters of St. Paul our motivating hope with using social media is always to bring people closer to Jesus … we also like to pull back the mysterious cloak on religious life a little bit too to give people a glimpse into our life!”

Davis, who recently professed her final vows and is stationed in Alexandria, Virginia, lived above the book center in Chicago for about three years after making her first profession.

She’d grown up on a small farm in Maryland and suddenly found herself living in a bustling metropolis. She watched the sunrise over Daley Plaza and prayed for the people she watched rush to work on her walk to Mass each morning.

When she first visited, Sister Jacqueline Jean-Marie Gitonga, too, was struck by the overwhelming sense of peace inside the convent despite the frenetic pace of life just outside its walls. She thought to herself, “I can’t believe it. I’m right in the heart of the city, and it’s so quiet and peaceful in here.” 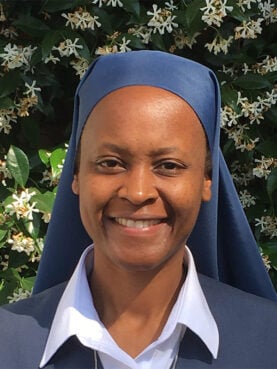 “It’s like Moses and the burning bush. I gotta find out why this bush isn’t burning. I gotta come back. There’s something about this.”

Gitonga, 44, had gotten to know the Daughters of St. Paul as a doctoral student studying abroad from Kenya at the University of Illinois Urbana-Champaign. She’d take a bus several hours to Chicago to intern with the sisters and spend time discerning the unexpected call she felt to religious life. Now stationed in New Orleans, she spent about three years in Chicago.

“It was like being a kid in a candy store,” she said of visiting the book center as a student.

Recognizing how important community is after many people were forced apart by the pandemic, the sisters plan to transform their remaining book centers into more dynamic spaces for people to gather.

On a recent Tuesday, a life-size cardboard cutout of Pope Francis smiled at passersby from the window of the Chicago store as they spilled out of ride shares for the hotel next door or shuffled past looking at their phones, ignoring a choral recording of “We Are the World” drifting from the book center, as well as the sign on its door reading, “Get your items now, while supplies last!”

Dugas remembered when the foot traffic along Michigan Avenue brought a wide variety of customers, even if some tourists made a quick about-face when they realized it was a Catholic bookstore and not a souvenir shop.

“You never knew what’s gonna walk through the door,” she said.

“There’s something delightful about it — and terrifying at times — but you see the swath of humanity in all of its beauty, and in all of its need, and in all of its horror,” she said. “We really believe that, somehow, God is calling them here to feed them and to, in many ways, reclaim them as his children.” 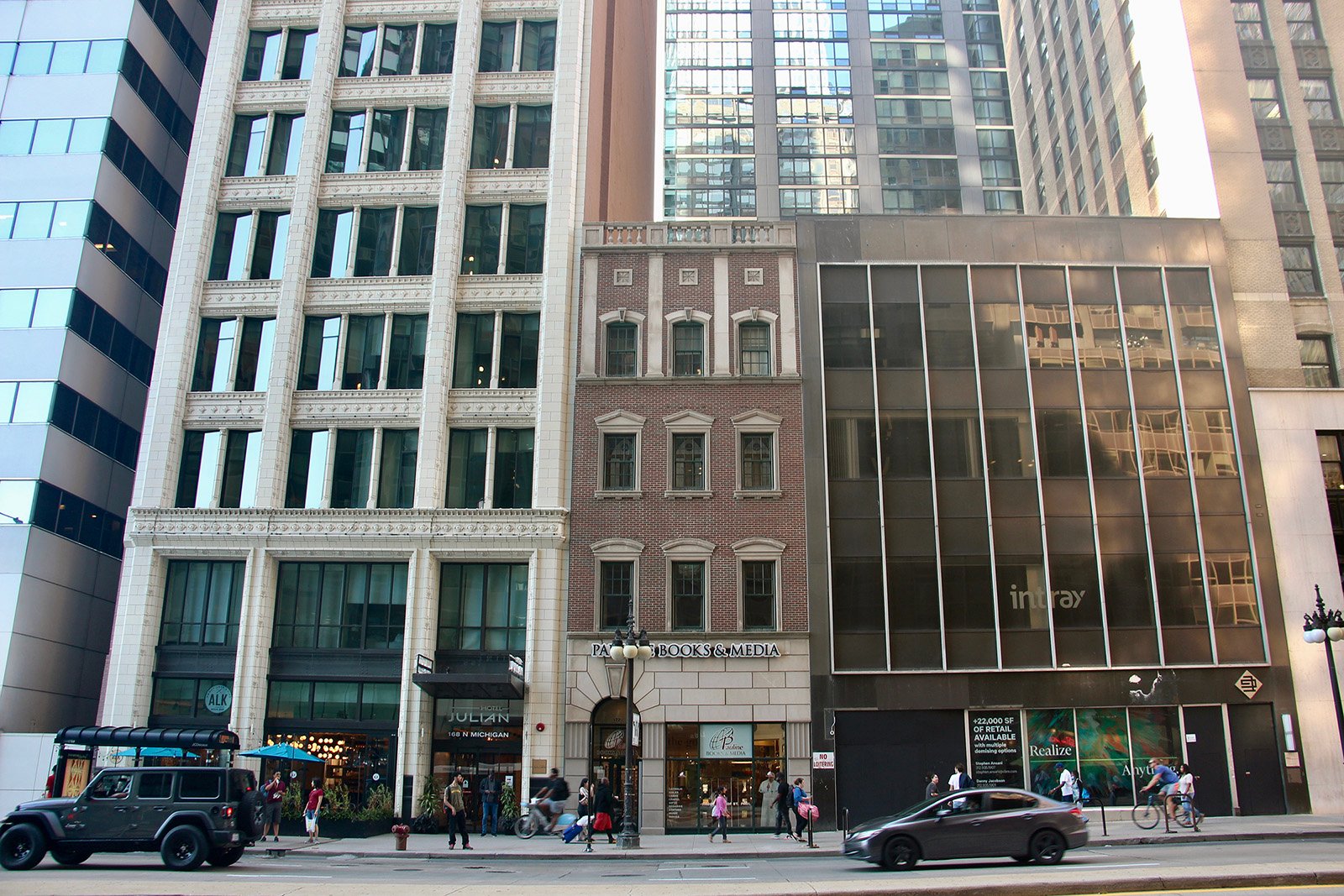 RELATED: In Kazakhstan, Pope Francis is expected to appeal for peace in Ukraine