Our culture is deeply confused about this question. The answer seems to be determined primarily by two things: arbitrary cultural trends and how tasty we find their flesh.

Consider how we in the United States treat pigs versus how we treat dogs. In most corners of the U.S., pigs are for food and dogs are for companionship, with dogs often rising to the status of family members.

It makes sense in a way that pigs and dogs occupy similar places in different cultures, as they are similar in terms of intelligence and sociability. If you doubt it, here’s a video of a pig successfully playing a computer game.

Looked at from this angle, it’s not just curious but cruel that Western culture can’t make enough dog strollers to keep up with demand, while on “factory” farms pregnant pigs are imprisoned in abusive “gestation crates.”

Surely you’ve heard: In pursuit of the goal of maximizing what farming magazines refer to as “protein units per square foot,” pigs spend much of their lives in crates small enough that they can’t turn around or even lie down. Once sows become pregnant, they are crated to keep them from being killed by other sows.

Such an unspeakably cruel practice was rightfully banned in California in 2018 by Proposition 12, a ballot measure that regulated confinement of animals and even banned mistreatment by farms that export pig meat to the state. But some pig meat producers have challenged Proposition 12, and that challenge will be decided by the Supreme Court during the upcoming term. 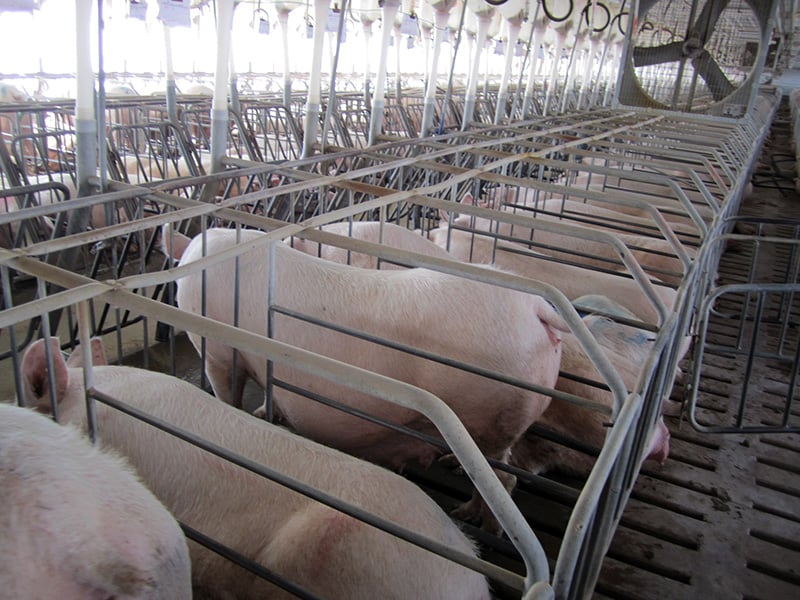 Sows in gestation crates at a pig breeding facility in Waverly, Virginia, in 2010. Photo by the Humane Society of the United States/Wikipedia/Creative Commons

The case will depend on fairly fine (and even esoteric) legal questions, but one central question will be foundational: What are pigs for?

The answer can be found in the Bible, as well as in Catholic theological insights that arise from studying the Bible.

Puzzled by this claim? Befuddled? Scandalized?

Hear me out. Answering the question “what are animals for?” is a Christian issue. More than that, getting Christians on board with animal protection might change our culture in ways it needs to be changed.

Nonhuman animals are said in the two opening chapters of the Bible to be created and called “good” by God, each according to their kind, on the same day God created human animals. These animals are created by God and brought to Adam because “it is not good for him to be alone,” reads the Book of Genesis. Adam and Eve are given fruits and vegetables to eat — eating animals only comes later, after human sin has screwed up the ways God intended us to live.

So this is one biblical answer to the question “What are animals for?”

When Pope Benedict XVI was asked in 2002 about factory farming, he answered this “very serious question” by saying it was problematic because it contradicted a biblical vision of the relationship between human beings and animals. Pope Francis built on Benedict’s vision, even insisting that Jesus’ mother, Mary, mourns the suffering of these animals.

But Benedict and Francis have also wrestled with the fact that sin has screwed things up and, though Christ has redeemed the world through his death and resurrection, the kingdom of God has not yet arrived in its fullness. We are in this awkward “already but not yet” place in which we are called to witness to a kingdom that has yet to come in its fullness in a world still marred by sin.

The Catechism of the Catholic Church tries to inhabit this complex space by teaching that, while it is acceptable to use animals for food and clothing, we human beings nevertheless “owe them kindness.”

That is the kind of space currently inhabited, too, by the state of California. While not banning pig meat altogether, the state nevertheless insists that pigs be treated with kindness — or at least not with abject cruelty.

And it is right to do so. There is absolutely no way we can witness to the fact that God created pigs good — that God wills for pigs to flourish according to their kind — while allowing for merciless and cruel practices like putting them in gestation crates.

So here’s our final answer: Pigs are not for using as if they are mere objects, or protein units. Pigs are fellow creatures, creatures God created good, and we are all bound to respect the will and design of our Creator with regard to these creatures.