(RNS) — A national survey by the Jewish Electorate Institute finds that Jewish voters are highly motivated to go to the polls in November, with concerns over the future of democracy and abortion as the top issues driving their choices.

In keeping with decades-long patterns, the poll, based on online interviews with 800 Jewish registered voters conducted Aug. 25 to Sept. 1 by GBAO Strategies, shows that Jewish voters lean overwhelmingly toward the Democratic Party. The poll found 70% of Jewish voters said they planned to vote for Democratic candidates and 24% plan to vote for Republican candidates. (Five percent were undecided.)

The Jewish Electorate Institute describes itself as independent and nonpartisan.

Disapproval of the U.S. Supreme Court ruling in Dobbs vs. Jackson Women’s Health Organization, which overturned the right to abortion, was resounding: 82% of Jewish registered voters disapproved, and 56% said the decision adds to their motivation to vote.

Jim Gerstein, founding partner of GBAO Strategies, said Democrats have increased their strength among Jewish voters by 10% since its last poll in April, largely driven by the abortion issue. (The court issued the ruling in June.)

“Abortion has completely transformed the 2022 midterm elections,” he said in a press briefing. “The Jewish vote is not immune to that.” 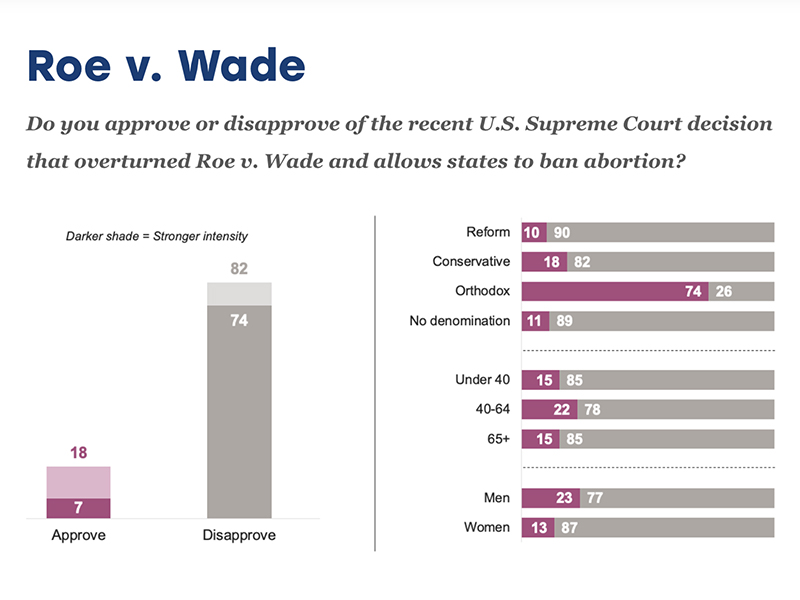 American Jews have become especially vocal on abortion. On Wednesday (Sept. 14), activists, rabbis and members of Congress stood outside the U.S. Capitol and blew the shofar or ram’s horn to proclaim their support for abortion rights. On Tuesday, Jewish abortion rights activists met with second gentleman Douglas Emhoff, who is Jewish, to argue that various state-level abortion bans violate the religious freedom of many U.S. Jews.

Judaism broadly teaches that abortion is not only permitted, but sometimes required when the life of the pregnant person is at risk.

But while abortion is a driving issue, especially among younger Jews, the threat to democracy appeared to be an even larger impetus to vote. The poll found 74% of Jewish voters watched the Jan. 6 committee hearings on TV, with 39% saying they watched them “very closely.” The hearings motivated 57% of them to vote, the poll said.

The threat to democracy was not as big an issue among voters of all faiths and none, according to an NBC News poll from August, which showed only 29% of registered voters calling threats to democracy the most important issue facing the nation.

“The Jan. 6 issue is driving Jewish voters much more so than the general population,” Gerstein agreed. 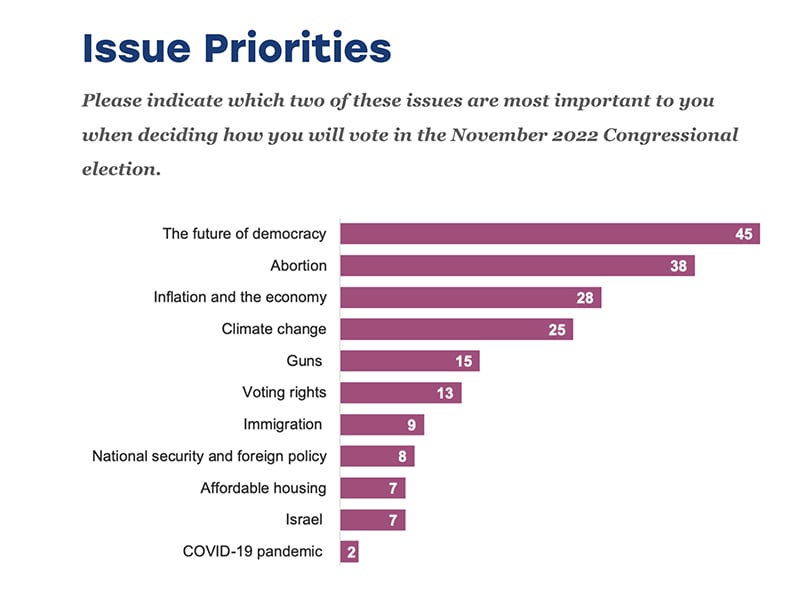 Perhaps not surprisingly, 79% of Jews had an unfavorable opinion of former President Donald Trump, with 19% approving of him.

“As long as you see these levels of unfavorability among Jewish voters toward the Republican Party and its leadership,” Gerstein said, “they are not going to make inroads with the Jewish vote. In order for that to change, there would need to be significant changes in the Republican Party’s positions, brand and image.”

In other findings, the poll showed near-unanimous support for gun safety measures, with 96% of Jewish voters supporting comprehensive background checks for gun purchases and 91% supporting raising the minimum age to purchase a gun from 18 to 21.

It also showed that 92% of Jewish voters are concerned about antisemitism and by a 50%-20% margin, they trust Democrats more than Republicans to fight it.

The survey’s margin of error rate was plus or minus 3.5 percentage points.