WASHINGTON (RNS) — Blowing shofars, traditional Jewish instruments made from a ram’s horn, a group of Jewish lawmakers, rabbis and activists proclaimed their support for abortion rights outside the U.S. Capitol on Wednesday (Sept. 14), insisting that access to abortion is a Jewish value.

The event was one of many demonstrations dubbed “sho-tests” to convene across the country by the National Council of Jewish Women in response to the U.S. Supreme Court decision in Dobbs v. Jackson Women’s Health Organization to overturn abortion rights and looking ahead to November’s midterm elections.

“During the week of action, every blow of the shofar in public spaces unifies us in solidarity, as we sound a wake-up call to our people and the nation that abortion is essential health care — and abortion justice is a Jewish value,” U.S. Rep. Debbie Wasserman Schultz of Florida said as the demonstration got underway.

She was followed by Rep. Sara Jacobs of California, the youngest Jewish member of Congress, who called the court’s decision to overturn Roe v. Wade, the 1972 decision that legalized abortion nationwide, an affront to her religious beliefs as a Jewish person.

“In Jewish law, it teaches human life begins when you take your first breath,” Jacobs said. She also voiced frustration with conservative religious activists who have opposed abortion, accusing them of imposing their own beliefs — such as the idea that life begins at conception — on others.

“No one religion or belief system should be able to supersede others and dictate policies for a diverse nation,” she said.

NCJW is among several religious groups advancing the argument that new abortion bans that have followed the Dobbs decision infringe on the religious rights of others. Florida and Indiana are currently facing legal challenges to proposed bans on religious freedom grounds. Clergy from an array of religious traditions have signed on to the cases, with Jewish leaders taking a prominent role in both states.

Jewish Americans show overwhelming support for abortion access in polls, with 83% saying it should be legal in all are most cases, according to a 2014 Pew Research survey. Even Jewish GOP lawmakers are not uniformly behind the party’s general anti-abortion push; the Republican Jewish Coalition, a Washington advocacy group, says on its website that “many good people hold opposing views on these matters and we respect the differences of opinion among our membership.” 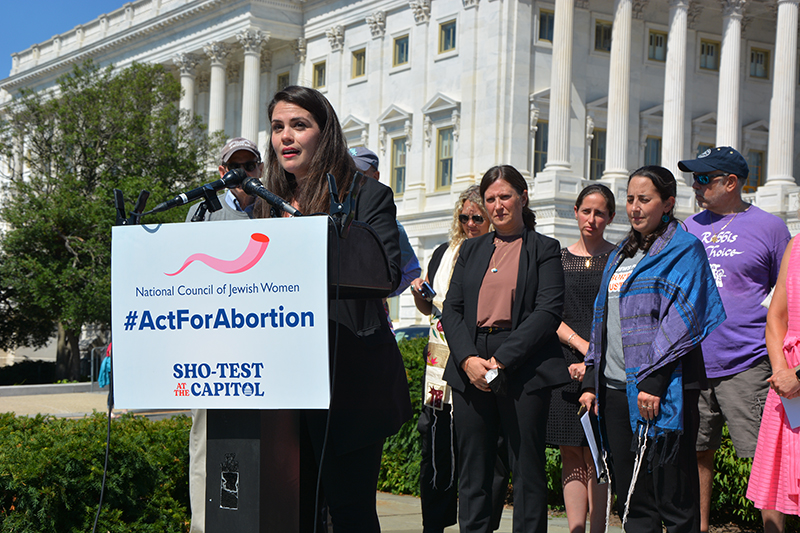 Sheila Katz, CEO of the National Council of Jewish Women, addresses an abortion rights event hosted by the group outside the U.S. Capitol on Sept. 14, 2022. RNS photo by Jack Jenkins

Two rabbis spoke at the event, including Rabbi Lauren Holtzblatt of Adas Israel Congregation in Washington. Sheila Katz, CEO of the National Council of Jewish Women, introduced Holtzblatt by noting that the late Justice Ruth Bader Ginsburg was a member of her congregation. It currently includes second gentleman Douglas Emhoff, who met with NCJW activists on Monday to discuss abortion rights.

Shofars have become common props at political events in recent years, most notably in the days leading up to the Jan. 6 attack on the Capitol, when activists marched around the building blowing shofars in hopes that God would overturn the results of the 2020 election. Some Jewish Americans have said they find the use of shofars in such contexts offensive.

Holtzblatt said some rabbis argue that when shofars are blown on Rosh Hashana, a Jewish High Holiday that begins later this month, they should be curved instead of straight because “our souls have not yet been redeemed.” Later, during Yom Kippur, straight shofars should be blown to signify that those present “stand in a joyful place.”

“We blow the shofar to remind us to keep doing the work so, we can again return to a straight path, the path forward,” she said. “In this moment in our country, the law of the land on reproductive rights has become bent. It has turned backwards 50 years. When we blow the shofar, we are announcing our call, our awakening, our commitment that we are not going to stay in this curved position. We are heading towards victory.”

Rabbi Annie Lewis, of Shaare Torah in Maryland, introduced the shofar-blowing segment of the event, calling on listeners to treat it as a “spiritual alarm clock, waking us up to all that is possible when we act together.”

A group of local Jewish leaders then raised curved shofars, blowing them in unison. They blew with such force that one of their number collapsed into nearby bushes as they finished, having briefly lost consciousness from the effort. 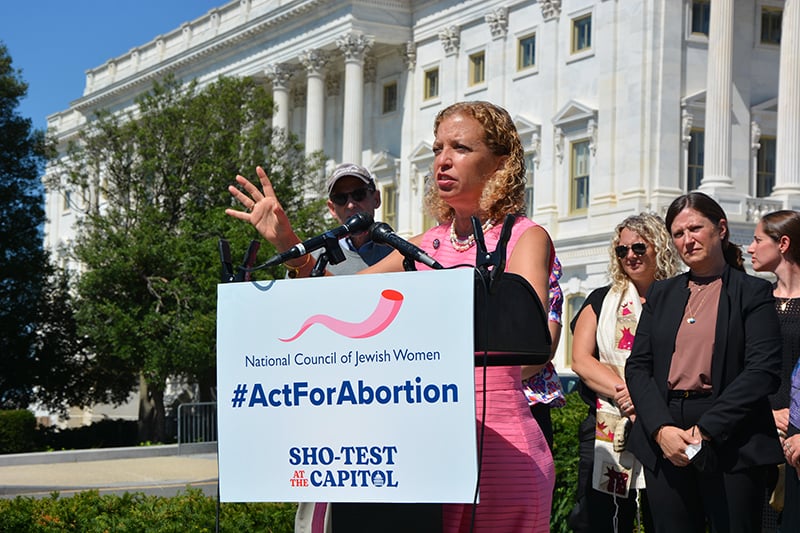 Rep. Debbie Wasserman Schultz, of Florida, speaks outside the U.S. Capitol on Sept. 14, 2022, during an abortion rights event organized by the National Council of Jewish Women. RNS photo by Jack Jenkins

After the man was cared for and smiling once again, Wasserman Schultz thanked him and others for their participation, joking that they had “literally given their all” to the event.

In an interview with Religion News Service, Wasserman Schultz pointed out that Jewish teaching particularly insists that abortion be made available if the life of a mother is at risk. The teaching runs counter to some abortion bans pushed by anti-abortion activists, which do not include such exceptions.

“Making sure that a woman’s life is able to be saved and preserved (is) essentially a tenet of Judaism,” she said. “For the law of the land in the United States of America to infringe on a religious Jewish principle around the idea of life is unacceptable — and the legitimate basis for these lawsuits.”

However, she stressed that concern about abortion access is not limited to U.S. Jews, but extends to all Americans.

“It’s not just about preserving the right to an abortion based on Jewish religious principles,” Wasserman Schultz said. “Every woman in America should have the right to make her own reproductive choices and not have the government take over her body.”