(RNS) — Stress, anxiety and other mental health problems have eaten away at teenagers and young adults during the pandemic, and members of the Church of Jesus Christ of Latter-day Saints are no exception, a new study finds.

Earlier in 2022, the Springtide Research Institute surveyed 4,038 Americans ages 13 to 25 about mental health and spirituality. Of those, 3,139 were students, whose findings are represented in the data below. This included 163 who self-identified as Latter-day Saints, or Mormons.

In “Mental Health and Gen Z: What Educators Need to Know,” researchers identified a number of problems that were exacerbated by the COVID-19 pandemic, including social isolation and additional academic pressure made worse by remote schooling.

Springtide was particularly interested in the intersection of religion and mental health in the lives of teenagers and young adults. Does religious activity help to decrease mental and emotional health problems? If they do experience mental health problems, are religious teens more or less likely to receive help? And which religions are doing the best job in caring for youth with mental health challenges, insofar as that can be determined by the data?

Overall, more than 71% of young people said they were religious, and 78% said they were spiritual. Having a religious identity does correlate with greater self-reported mental and emotional health. Those with a religious affiliation were more likely to say they were satisfied with their lives (60% vs. 51%) and that they were “well equipped to deal with life and its difficulties” (61% vs. 51%). They reported being happier and less depressed, overall.

Among the Mormons surveyed, there were bright spots but also areas of concern for parents, church leaders and educators. 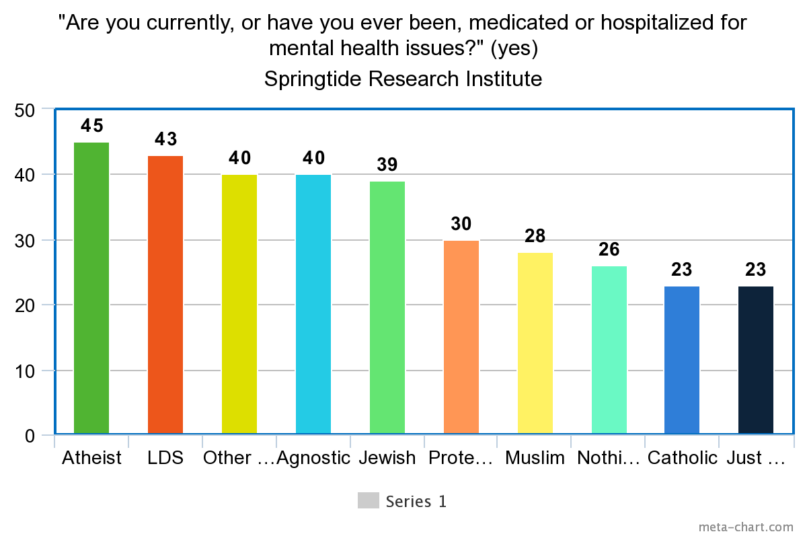 In terms of counseling, nearly half had worked with a mental health professional (47%) or were currently seeing one, which was slightly higher than in the overall sample (41%). 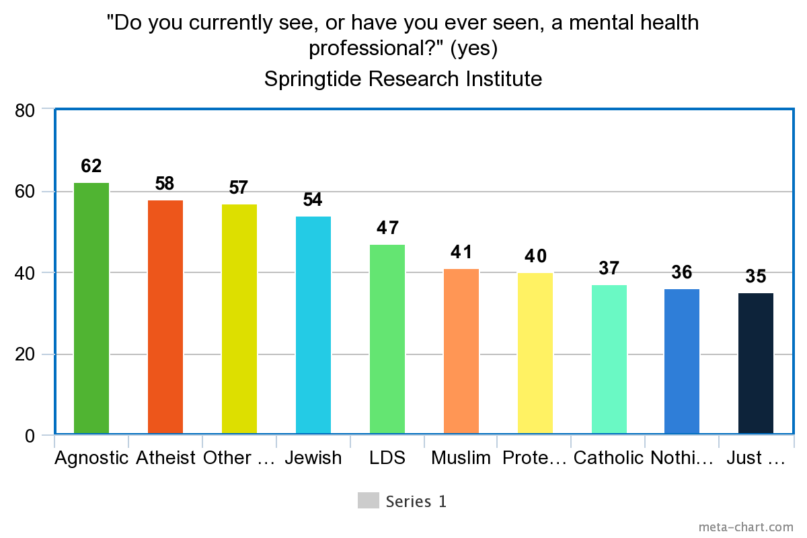 But that’s not necessarily a sign that LDS respondents are experiencing more mental health problems than other young people are. It’s a sign that they are getting treatment for it.

“If a certain community has, on average, higher levels of income, they will have greater access to mental health supports,” said Kevin Singer, the head of media and public relations for Springtide. “In almost all cases, students who report higher income in the home have a higher engagement with mental health resources and adults who care.”

This is a triple whammy, because families with deeper pockets are more likely to 1) have private insurance that will pay for counseling and medication; 2) be able to pay out of pocket for any treatments that insurance does not cover; and 3) live in areas with affluent school systems that can afford in-school therapists and psychologists.

In terms of socioeconomic status, the Mormons in the survey were a bit more likely to be above average (31%, compared to 23%) or average (48%, compared to 40%).

The survey offered other indications that LDS teens and young adults had greater access to treatment. Four-fifths of the Mormon respondents (80%) reported having “talked to a mental health professional such as a therapist, counselor, or psychologist in the last three months for help with emotional challenges/problems.” Just under half (47%) of the non-Mormon respondents said the same.

Three-quarters (76%) of Latter-day Saints say they had spoken about their mental health with a trusted adult at school, compared with 39% of non-LDS young people. And that’s interesting, because the survey also found that LDS young people had a higher rate of thinking that school counselors did not share their beliefs and therefore might not understand their particular challenges. What this indicates is that the Mormon teens and young adults were seeking out trusted adults even though they worried that those adults might not fully understand what they were going through.

In terms of potential religious support, 80% say they have talked with “some trusted adult OUTSIDE OF SCHOOL, like a relative, faith/spiritual leader, etc. in the last three months for help with emotional challenges/problems,” compared with 53% of non-LDS young people.

All of that is good news, potentially, in that LDS teens and young adults appear to be enmeshed in support systems. Singer said, “They don’t seem to feel especially lonely at school in regard to their peers. They’re just as likely to have friends. They don’t feel more isolated or disassociated at school.”

The potential problem area, according to the data, is in parental relationships. Given the strong emphasis the Church of Jesus Christ of Latter-day Saints places on family togetherness and parents being very involved in their children’s lives, this is ironic, but the LDS young people in the survey did not appear to see their parents as supportive of mental health treatment.

Another gap appeared when they were asked whether they would want their parents or guardians to know if they were meeting with a counselor or therapist at school. Sixty-one percent of the Mormon young people did not want their parents to know, compared to 47% among the other respondents.

As always when we’re dealing with a relatively small sample, the margin of error is higher for the LDS respondents than it is for, say, the Catholics and Protestants in the sample.

Even with that in mind, however, Singer said the differences between LDS and non-LDS respondents on mental health treatments are “significant. Somewhere, young Mormons are finding an opportunity to trust adults in their lives with mental health problems. Maybe it’s a youth group leader; maybe they are finding safe adults at church. But it’s not necessarily the parents. Maybe it’s that LDS parents just traditionally have high standards for what level of mental health their community is supposed to exhibit.”

How religious are Gen Z Mormons in the US? The results are mixed 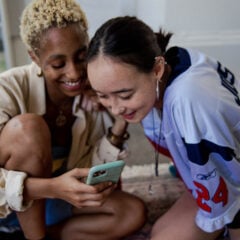