(RNS) — The acting general secretary of the World Council of Churches met this week with Patriarch Kirill, the Russian Orthodox Church head who has drawn global criticism for lending spiritual support for Russia’s invasion of Ukraine.

According to a WCC readout of the meeting, acting General Secretary Fr. Ioan Sauca, a Romanian Orthodox priest, met with Kirill at the Patriarchal Residence in Moscow on Oct. 17 to discuss “how churches are called to be peacemakers.” The two reportedly engaged in a public discussion as well as a separate, private conversation.

The meeting followed months of controversy surrounding the Russian Orthodox Church’s membership in the WCC. After Russia launched its invasion of Ukraine earlier this year, Sauca sent a letter to the Orthodox leader urging him to help facilitate a cease-fire. But Kirill instead repeatedly voiced support for the invasion, sparking calls to expel the Russian Orthodox Church from WCC membership. Sauca and other WCC leaders eventually rejected the idea, keeping the ROC in its fold. WCC members published a statement at its assembly in September denouncing the war, but Ukrainian observers at the gathering criticized it as weak.

Sauca reportedly referenced such concerns during his meeting with Kirill, making mention of “statements that condemn the war and violence which we made in our governing bodies — the statements which were elaborated with the participation of delegates from the Russian Orthodox Church.”

“The reason for coming here is to see what we can do together to build bridges of peace and reconciliation and stop the bloodshed and the danger of nuclear conflagration,” Sauca said, according to the readout. “I think it would be very helpful now to make the same statement, saying clearly to the world what you told us, here, today: stop the bloodshed, stop the killing, stop the destruction of infrastructure, look for peace and reconciliation.” 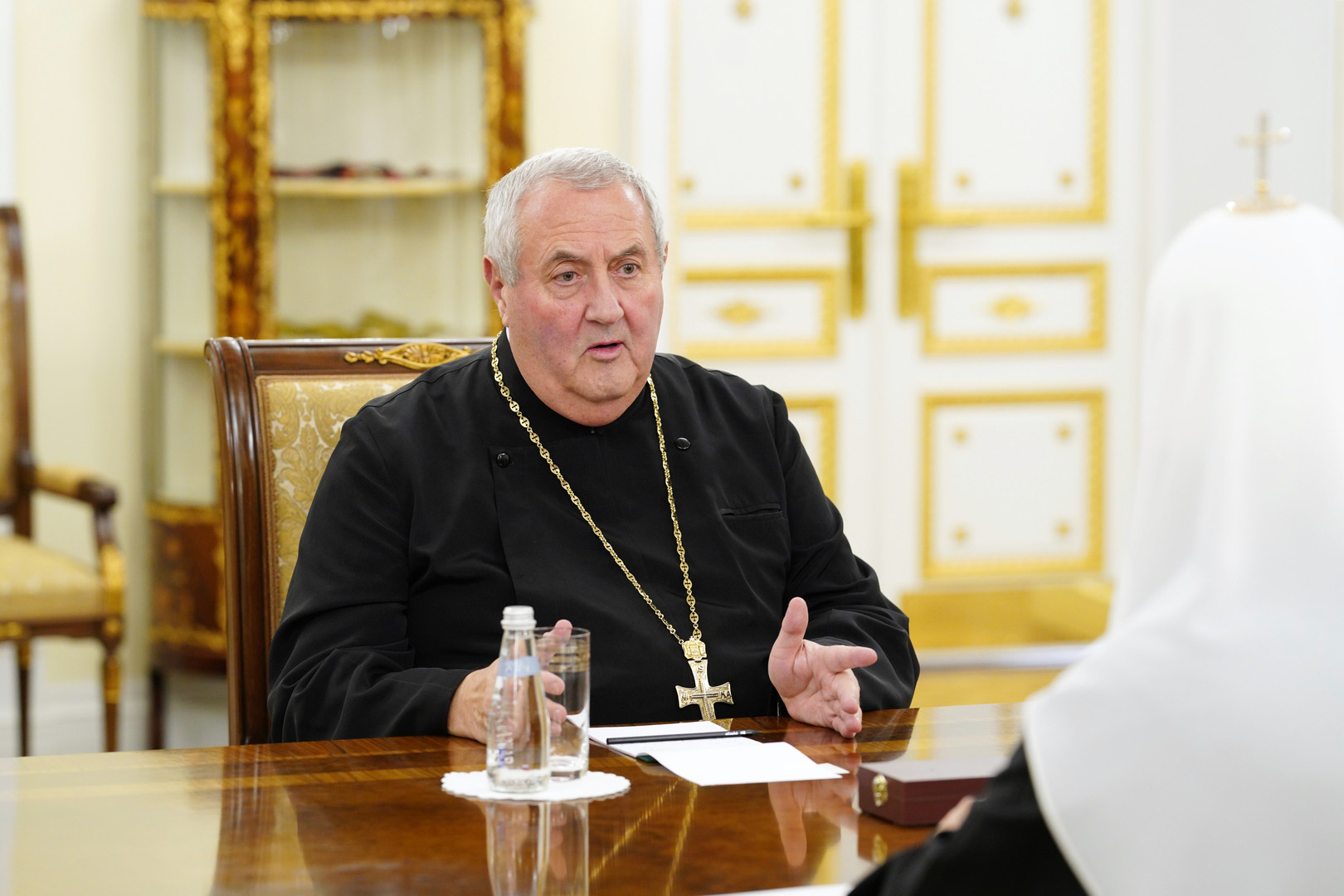 A separate report of the discussion posted to the patriarch’s website on Thursday said Kirill also acknowledged the debate.

“There were challenges and critical issues, one of them pertaining to the Russian Orthodox Church. Demands were heard that the Russian Church should be expelled from the World Council of Churches. However, nothing of the sort occurred during the Assembly,” Kirill said, per the report.

According to the WCC’s account, Kirill agreed that churches should be peacemakers, Christians should not “support wars and killings” and that “war cannot be holy.” He reportedly also insisted churches “must not add fuel to the fire,” referring to political rancor and violence.

Yet Kirill has repeatedly been accused of doing just that, particularly amid Russia’s ongoing invasion of Ukraine.

In addition to laying the spiritual groundwork for the war — Kirill spent years promoting a concept of a “Russian world” or “Holy Rus’” that insists Ukraine is part of Russia’s spiritual space — the patriarch has described Russia’s enemies in Ukraine as “evil forces” and suggested the conflict amounts to a “metaphysical” battle with the West and “gay parades.”

More recently, Kirill has said Russian soldiers who die while fighting in Ukraine have all of their sins forgiven, comparing their deaths to Jesus’ sacrifice. The remarks, delivered as part of a Sunday sermon in September, came days after Russian President Vladimir Putin called for a “partial mobilization” of military reservists in Russia after the country’s military suffered a spate of defeats in Ukraine. A few days later, Russia illegally annexed four provinces in eastern Ukraine. Faith leaders the world over have criticized Kirill’s rhetoric, including Pope Francis. An expected in-person meeting between the global faith leaders in August fell apart when the patriarch canceled his travel plans, but the two met virtually earlier this year, when the pontiff warned against spiritual justifications for war.

“Once upon a time there was also talk in our churches of holy war or just war,” Francis told Kirill, according to the Vatican press office. “Today we cannot speak like this.”

Despite this, the account of Kirill’s conversation with Sauca posted to the patriarch’s website claimed Kirill “seemed not to be aware” of criticism lodged at him regarding his rhetoric, prompting members of his delegation to blame others of attempting to “engineer accusations against the Primate of the Russian Orthodox Church.”