(RNS) — Imagine a common enough scene: It’s Sunday morning in a white Pennsylvania suburb. A churchgoer joins his evangelical Christian congregation for hymn singing, Bible reading, a sermon and prayer. It’s unlikely that anything will be said about politics and elections. For many congregants, the service will be their only religious activity of the week. Others will have read the Bible or prayed daily (or as needed) throughout the week.

Now imagine the churchgoer’s last prayer was, “Father God, we’re asking you to open the eyes of President Trump’s understanding that … he will know how to implement divine intervention, that you will surround him with none of this Deep State trash, none of this RINO trash … in the name of Jesus.”

That line was an actual prayer given from the stage at a recent stop on the ReAwaken America tour, a Christian-inflected traveling roadshow featuring MAGA celebrities — “RINOS” are the other kind of Republicans — and drawing crowds in the thousands to venues across the country.

Inspired by conspiracy theories about the COVID-19 virus and the 2020 election, the two-day event has hit almost two dozen cities, with one more event scheduled in Branson, Missouri, before midterm elections on Nov. 8.

Though Trump rallies themselves have lately taken on a pseudo-evangelical character, complete with emotional music, hand-waving salutes and quasi-worshipful devotion to Trump himself, the ReAwaken events cost upwards of $250 per ticket and are akin to religious revivals. They feature clergy, overtly religious rhetoric and even baptisms.

The events are both bizarre and popular enough to pose a question ever relevant to our national discourse about religion and politics and especially important to conservative Christians: Has the white evangelical church’s association with Republican politics been good or bad for Christianity? 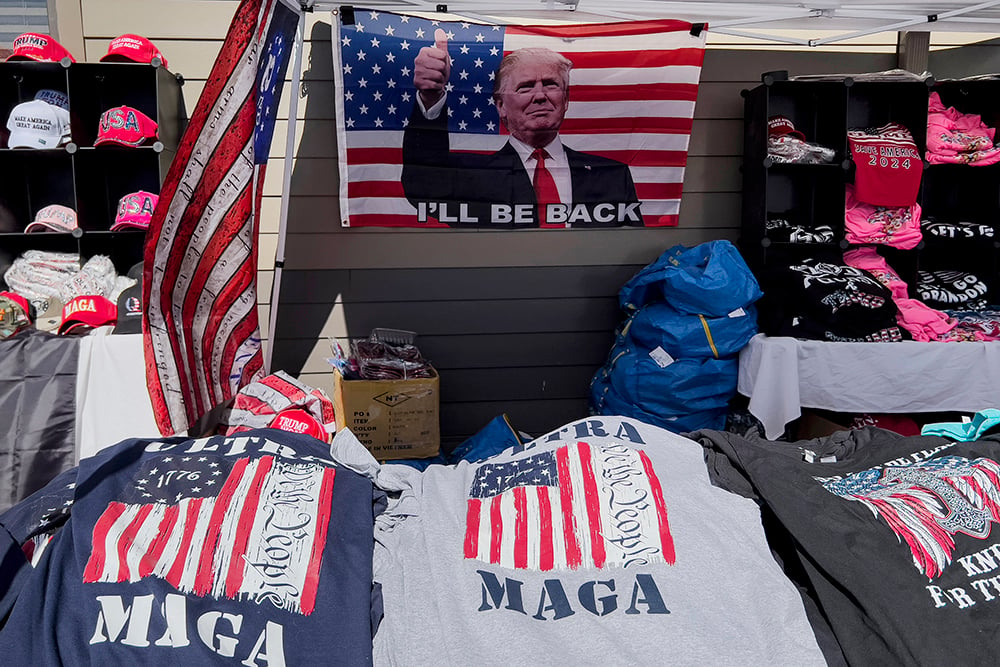 MAGA merchandise and a U.S. flag decorated with an image of former President Donald Trump that reads “I’ll Be Back” are displayed for sale during the ReAwaken America tour at Cornerstone Church, in Batavia, N.Y., Saturday, Aug. 13, 2022. Michael Flynn, a retired three-star general who served as Trump’s national security adviser, has drawn together election deniers, mask and vaccine opponents, insurrectionists, Proud Boys, and elected officials and leaders in state and local Republican parties. Along the way, AP and Frontline documented, Flynn and his companies have earned hundreds of thousands of dollars for his efforts. (AP Photo/Carolyn Kaster)

Years ago, an evangelical pastor quipped, “I have my people for one hour on a Sunday morning. FOX News has them for the rest of the week.” ReAwaken America completes the takeover of Christian hearts and minds by co-opting worship for the purpose of FOX-ifying it. Evangelical politics are changing the character of faith in ways that may be hard to pull back from.

Aside from a handful of journalists, including Peter Wehner, writing in The Atlantic, few conservative evangelicals of any position have spoken against ReAwaken America. The only faith leaders to speak out against these patently obnoxious perversions of Christianity are religious progressives.

It would be so easy for conservative Christians to simply say, “These rallies are not a good model for evangelical political engagement.” But decent evangelical pastors, seminary heads and other leaders, struggling to maintain their cultural influence, seem content to rely on the indecent ones. Christians who once cared about personal honor appear glad to have someone else doing their dirty work for them.

There are other possibilities: These trusted leaders may not be speaking out against bottom-feeder Trump hangers-on because they are so kneecapped by Trumpist donors, directors and trustees that they cannot bring themselves to oppose what is patently wrong. Perhaps they are so ensnared in their own complicity in creating MAGA power that they can no longer find their way out. But the effect of their response to ReAwaken America, or lack of one, allows us only to assume that they support the project.

It’s a fair retort to ask where I’ve been for the past half-decade and more. Silence from many institutional evangelical leaders in the face of shameless misuse of faith by professed Christian Trump disciples has been the norm for years. But ReAwaken America rallies are so grotesquely perverse, destabilizing and riddled with delusions and heresy that silence is no longer tenable. 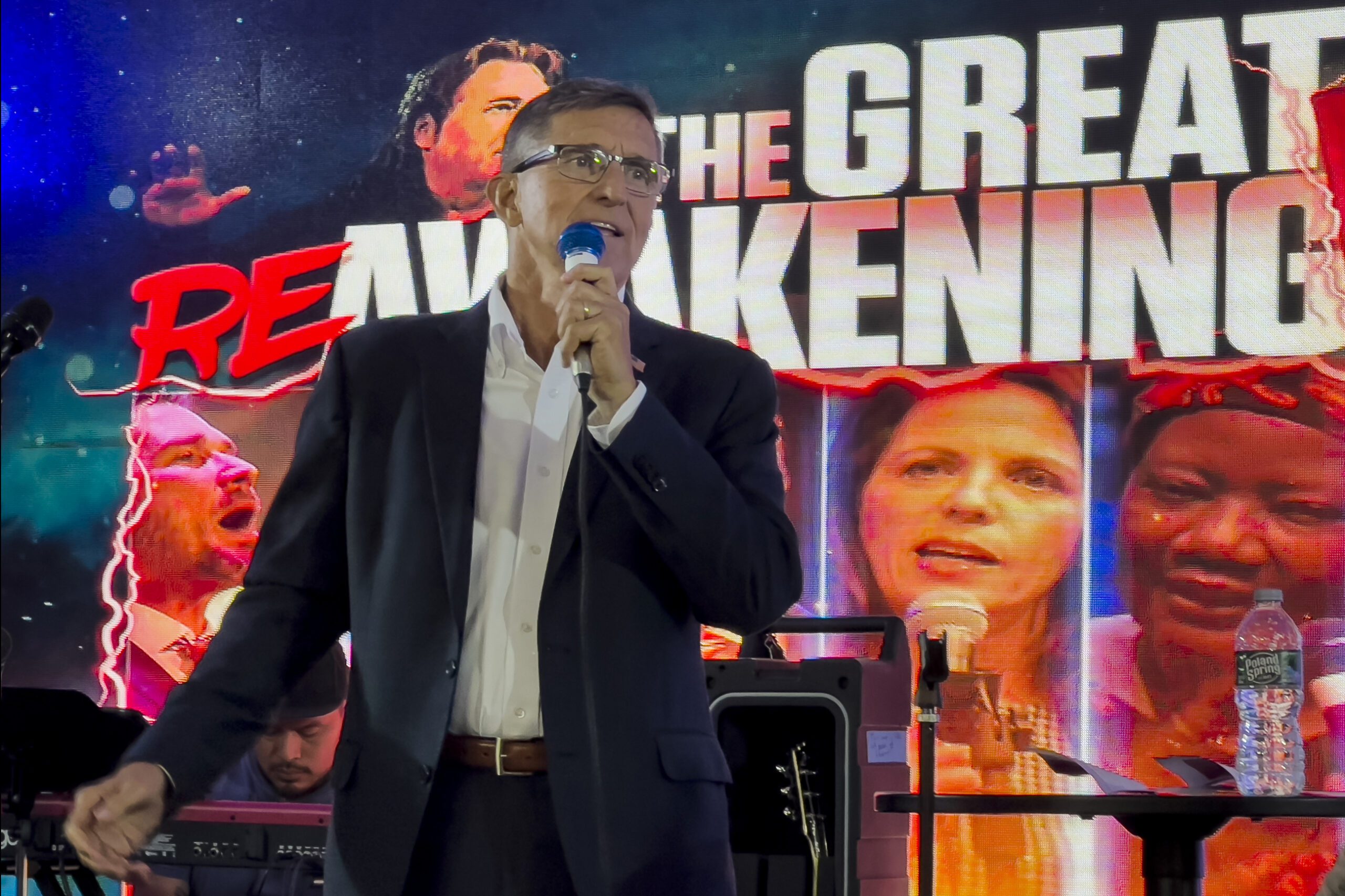 Michael Flynn, a retired three-star general who served as Trump’s national security adviser, speaks on stage during the ReAwaken America tour at Cornerstone Church, in Batavia, N.Y., Friday, Aug. 12, 2022. Thousands of people gathered to hear his message that the nation is facing an existential threat, and to save it, his supporters must act. (AP Photo/Carolyn Kaster)

My fear is that ReAwaken America’s headliners are forming the consciences and affecting the spiritual formation of people who once actually did fear God and love this country. We’ve seen in the past two decades how paranoid ideas about world governments and the like have replaced helping neighbors and discipling new believers as Christian actions. Now we are seeing Christian nationalism, long rejected as the worst tendency promoted by the worst possible proponents, poison the once-healthy bloodstream of American Christianity.

The worst effect of evangelicals’ silence is that bad actors have learned that legitimate Christian leaders and organizations will do nothing to stop them. If election lies and the Jan. 6, 2021, Capitol riot failed to inspire responsible evangelicals to question their allegiances to political masters or to actual religious nationalism, then MAGA activists have no reason to think they can’t continue to trade souls for votes with impunity.