(RNS) — The classic definition of a Jewish telegram (which would now be a text message): “Start worrying. Details to follow.”

My updated version of this:  “The details are here. Don’t worry so much.”

In recent weeks and months, I have been very worried, as have many liberal Jews, about the elections. For very good reasons.

Yes, Election Day produced its share of disappointments, even crushing disappointments. The victory of J.D. Vance in Ohio’s U.S. Senate race is distressing, especially because of his connections to, and endorsements from, the likes of Marjorie Taylor Greene. The reelection of Gov. Ron DeSantis and Sen. Marco Rubio in my state of Florida, while predictable, should concern anyone who cares about the bodily autonomy of women, LGBTQ sensitivities and many other things.

But there is good news as well. The good news for Jews is that Jewish values did pretty well.

In Pennsylvania, a committed Jew, Attorney General Josh Shapiro, beat state Sen. Doug Mastriano, a certified Christian nationalist antisemite, in the state’s gubernatorial race. Mastriano, the Republican nominee, had partly built his campaign on criticisms of Shapiro (and his children) for attending a “privileged” school. That happens to be a Jewish day school.

When accusations of antisemitism followed, Mastriano’s wife, Rebecca, claimed that she and her husband care more about Israel than many Jews do. (I love it when Jew haters tell Jews how they should express their commitments to Jewish peoplehood, don’t you?)

Mastriano ended his campaign with a bizarre “Fiddler on the Roof” parody, led by a Messianic Jew.

It is not only that Mastriano lost. His antisemitism lost.

Shapiro is a Shabbat-dinner-eating, Jewish-day-school parent. Get your mind around that.

“My faith is what has guided me into a life of service,” … crediting his youthful work in the movement to free Soviet Jews. He keeps kosher, proposed to his wife, Lori, in Jerusalem, and featured challahs she baked in his campaign launch video. Throughout the race, he tried to be home for Friday night dinner with his family, which he described as “wonderfully chaotic, as most Shabbat dinner tables are.”

In JTA, Shapiro said: “Whether my day starts here in Bloomsburg, Uniontown, or anywhere in Pennsylvania, I make it home Friday night for Sabbath dinner because family and faith ground me.”

The last time we had a national political figure who is as “Jewish” as Shapiro was Sen. Joseph Lieberman, who ran for vice president on a Democratic ticket headed by Al Gore and who was Shabbat-observant. In fact, some say that Shapiro could be a possible future presidential candidate.

Yes, there is deep antisemitism in this country.

But here’s the thing. In Pennsylvania, antisemitism lost. So did Christian nationalism.

More than this: A traditional Jew won.

With the sheer number of Jewish voters in New York, this election might conceivably have gone to the Jewish candidate. It didn’t.

Why is this loss, paradoxically, good for the Jews? Zeldin’s loss is significant because it is clear that, in perhaps the most “Jewish” state in the United States, Jews voted their values, and not their ethnic loyalty. 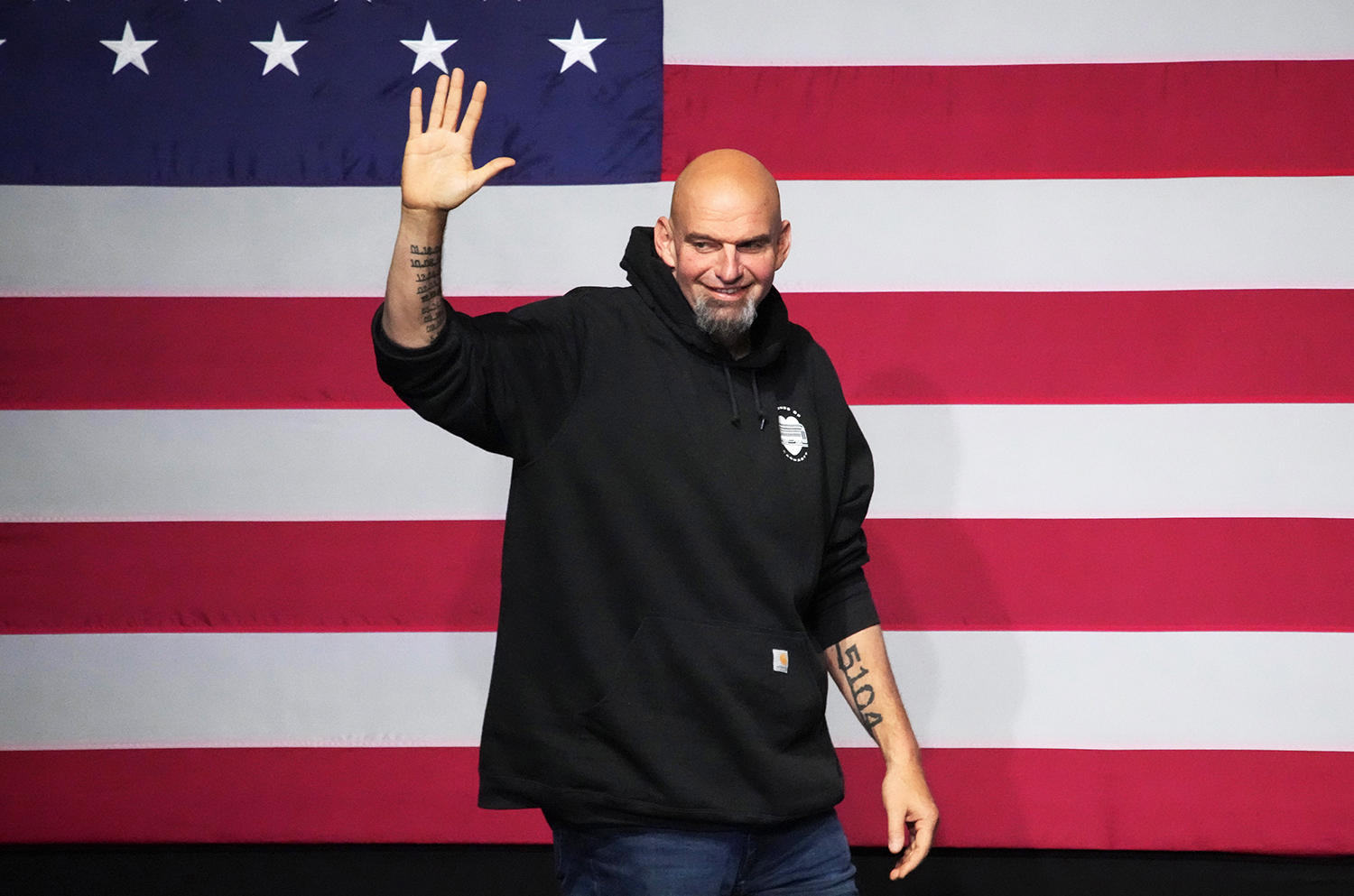 Also in Pennsylvania, Lt. Gov. John Fetterman beat Dr. Mehmet Oz for the state’s open seat in the U.S.  Senate. On the surface, this has nothing to do with either the Jews or Judaism.

Except, this: The attacks on Fetterman’s performance and his verbal dexterity during the debate appalled me. As everyone knows, Fetterman is recovering from a stroke. I found the attacks to be politically based (of course) and cruel. Jewish ethics calls for rachmanut, compassion, toward those who have suffered such a devastating life situation and admiration for those who are working to overcome it.

By electing Fetterman, Pennsylvania voters — whether they knew it or not — were resisting the politics of callousness.

Wherever possible, reproductive freedom won. This is a hot issue for Jews, and for others. In several states, abortion rights were on the ballot. In the majority of states, voters chose choice. Many of us believe that curtailing women’s rights to health care is a signal issue regarding the political and cultural future of this country. What we now see is that there is serious opposition to curtailing those rights. Strike another blow against Christian nationalism.

How good was this election for the Jews? Yes, of course, many Jewish candidates won: In Colorado, Sen. Michael Bennet and Gov. Jared Polis, the state’s first Jewish and first openly gay governor; in Ohio, Greg Landsman, a Wexner Heritage Program alum; in New York, Sen. Chuck Schumer, and Dan Goldman for a seat in Congress.

So, that is what happened on Tuesday.

Let me go one step further.

There is a wonderful passage in Mishnah Avot that recounts the glory of the ancient Temple in Jerusalem.

Ten miracles were performed for our ancestors in the Temple: (1) A woman never miscarried because of the aroma of the sacrificial meat. (2) Sacrificial meat never became spoiled. (3) A fly was never seen in the slaughter house. (4) The High Priest never had a seminal emission on Yom Kippur. (5) Rain never extinguished the fire of the arranged wood on the Altar. (6) Wind never prevailed over the pillar of smoke that rose from the Altar. (7) The Omer offering, the two loaves, and the show-bread [from the grain offering] were never found to be invalid. (8) The supplicants at the Temple would stand crowded together but would bow with ample space. (9) A snake or scorpion never did harm in Jerusalem. (10) A person never said to his fellow, ‘It is too crowded for me to lodge overnight in Jerusalem.’

The sages were really good at noticing what people notice.

In that passage, most of the miracles that occurred — were things that did not happen. That is what the sages noticed.

So, let’s talk about what did not happen on Tuesday.

Basically, all of my worst fears did not happen.

There were no hateful rallies. There was no violence at polling places. The expected election deniers have, thus far, been silent.

In the synagogue over the last few weeks, Jews have been reading the story of Abraham, the first Jew. The ancient sages taught that Abraham endured 10 trials — 10 tests of his faith — and emerged, unscathed, from each of them.

What happened on Election Day?

That is why Jewish liturgy contains a prayer for the government.

Jews have historically shown great respect for the temporal power. In fact, one of the great paradoxes of Jewish history is that Jews preferred strong, centralized governments — even if they were tyrannical — to weaker governments that would give free rein to elements that would be dangerous for Jewish survival. From the very opening moments of creation, the Jewish narrative has always preferred order to chaos — both in the cosmic and political realms.

Centuries before the English philosopher Thomas Hobbes, who taught that “each man is the other one’s wolf,” Jewish sages counseled: “Pray for the peace of the government, for without it, people would devour each other alive.” (Mishnah, Avot 3:2).

So, yes: America was tested, and America passed the test. Am I happy with all of the election results? A big, fat “hardly.” Do we have a lot of work to do, still, in this country? Absolutely.

Is there hope that this country will not plunge itself into a dark abyss of totalitarianism?

I am betting on America.

I urge you to do the same.