My birthday gift: my first guitar.

Days later, on Hanukkah, I got another gift — my first songbook, with words, music and guitar chords. It is a volume of Bob Dylan’s songs. A week later, I had already figured out how to play “Mr. Tambourine Man.”

The rest is history. My own musical history, cultural history, personal history. Bob Dylan has been part of my life for 56 years, a constant presence, and a constant question.

That is what makes his new book, “The Philosophy of Modern Song,” so compelling that I cannot turn it off. (Normally, I would say that I cannot put it down, but I am listening to an audio version.)

Dylan takes us on a tour of 66 of his favorite songs — not his own, but songs by others. It becomes his own odyssey through the world of modern popular music. He takes us from Stephen Foster to Bobby Darin (“Mack the Knife“) to Little Richard (“Tutti Frutti“) to the Fugs (“CIA Man“) (when was the last time you thought of the Fugs?) to Ricky Nelson (“Poor Little Fool“) to The Who (“My Generation“) to Elvis Costello (“Pump It Up“) to Harold Melvin & the Blue Notes (“If You Don’t Know Me By Now“) to the Clash (“London Calling“) to the Osborne Brothers (“Ruby, Are You Mad at Your Man?“) to the Grateful Dead (“Truckin’“) to Jackson Browne (“The Pretender“).

His list is crazy, eclectic, spanning more than a century of popular song. It is dizzying.

So, why do I say that this book is a Jewish masterpiece? 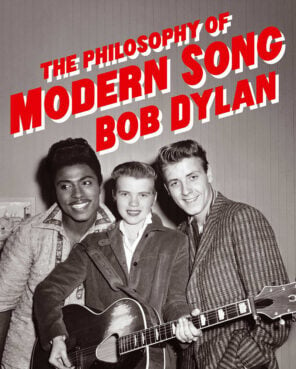 “The Philosophy of Modern Song” by Bob Dylan. Courtesy image

Forget, for a moment, Dylan’s twisted, complicated, on-again, off-again relationship with Judaism. The book is “Jewish” in its very shape and texture, its very feel, its voice. For each song, Dylan riffs on its meaning — its inner meaning to him — complete with free associations. He then analyzes the song in its original context, with biographical information about the composer and the performer.

So, yes, for each song, there is drash (its inner meaning and often fanciful interpretation) and peshat (what is really going on in it). Dylan has done nothing less than treating these songs, many of them obscure, as modern texts, and has dug deeply into them, in precisely the way that Jews are accustomed to treating our sacred literature.

There is this thing that Dylan does, in which he takes a word in the song’s title, and then free associates from it to other songs. At one point, he makes a list of every song he can recall in which the singer breaks down in tears while singing.

When he teaches about “Blue Suede Shoes,” every shoe in every song comes into the conversation. “There are more songs about shoes than about hats, pants, and dresses combined,” he writes.

Shoes reveal character and personality. Dylan takes a detour into the proper care of shoes, the history of shoes, the white buck that was pristine and unblemished, even getting into foot binding in China. To step on someone’s shoes is to invade their space, their freedom, their sense of self, and to do so is dangerous to the stepper.

Who, other than Dylan, could connect “London Calling” by the Clash, with its fierce apocalyptic sneer, to that sweet song by Roger Miller, “England Swings,” an homage to mod Britain? Only Dylan could see that the Clash were clashing with that version of Britain, savaging the Beatles, and putting themselves down by the river — this time, not the Mississippi of American popular song, but the Thames.

When he comes to “Poor Little Fool” by Ricky Nelson (his interpretation of Ricky/Rick Nelson’s family life and later story is almost worth the price of the book), he makes a large, mental list of every time the word “fool” shows up in popular song.

For “Ruby, Are You Mad at Your Man?” by the Osborne Brothers, he riffs on the name “Ruby.” He winds up visiting the Rolling Stones hit, “Ruby Tuesday,” detours to “Ruby, Don’t Take Your Love to Town.” “A rube is an easy mark,” Dylan says, before coming to Jack Ruby, the killer of President Kennedy’s alleged assassin, Lee Harvey Oswald.

When he writes about the Eagles’ “Witchy Woman,” he notes that it began as “twitchy woman,” and then free-associates to “Black Magic Woman,” and ultimately, a meditation on the history of the Salem witchcraft trials.

Who does this sort of thing, you ask? Well, yes, apparently, Dylan — frenetically.

Dylan is walking in the path of the ancient sages who could take the biblical text, turn it into one huge text, and could hypertext from one usage of a word to another. They could take the idea of a mountain and jump from Mount Ararat, where Noah’s ark came to rest; to Mount Moriah, where Abraham almost sacrificed his son, Isaac; to Jacob’s ladder, which is sort of a mountain; to Mount Sinai, the site of divine revelation … A young Bob Dylan, as seen in his book “Chronicles.” Photo courtesy of Simon and Schuster

Ah, but let’s save the best for last.

That would be Dylan’s discourse on “The Pretender” by Jackson Browne, which he thinks is Jackson’s best song, and which he textually links to “The Great Pretender” by the Platters.

It occurred to me why this, of all songs, touches Dylan the most.

While listening to the book the other night — it turns out I’m no less an intellectual multitasker than Dylan — I re-watched the 2005 Martin Scorsese documentary about the singer’s early life and career, “No Direction Home.”

Its constant theme? Tommy Clancy of the Clancy Brothers, the Irish folk group, put it this way: Dylan was a shape shifter. His entire life was one long process of self-erasure and reinvention, starting with his pretension of being Woody Guthrie.

Robert Allen Zimmerman was born in Duluth, Minnesota, on May 24, 1941, and grew up in Hibbing. His parents, Abe (short for Abram) and Beatty (for Beatrice), were children of Yiddish-speaking immigrants who had settled in Minnesota early in the 1900s.

Bobby Zimmerman might have had a Jewish education sufficient enough to have learned the history of Jewish disguises. That narrative would include: Jacob masquerading as his twin, Esau, in order to receive the blessing of his father, Isaac; Tamar disguising herself to entice her father-in-law, Judah; Joseph concealing his identity from his brothers; David feigning insanity to gain entry into the Philistine camp.

Bobby might have learned, also, about the conversos of medieval Spain, the so-called Marranos, who lived outwardly as Christians but inwardly and secretly as Jews.

Bobby Zimmerman followed those Jewish paths. He changed his name, his style, his voice, his music — everything was in a constant state of flux. Like the Jewish people itself, his life was a series of evolving personae. In “I’m Not There,” another cinematic interpretation of Dylan’s life, we find a series of stories about Dylan’s various personae over the years, because, in fact, he really is not there.

It was as if his life was a series of midrashim, of sacred Jewish explorations and commentaries, on an older and far more elusive text: himself.

It was as if Dylan is saying that the hidden subject of “If You Don’t Know Me By Now” is himself.

It was as if Dylan is saying that “The Pretender” is really Dylan himself.

Dylan knows that he is not “Forever Young,” that he is now 81 years old. That is why his riff on aging is so poignant. He writes about John Prine’s “Hello in There,” which is about an aging couple, written from a young man’s perspective. (Prine himself would die before reaching anything resembling old age.) Dylan smiles at how Jerry Garcia named his short-lived bluegrass band Old & In the Way, though Garcia himself would die long before he would become, well, old and in the way.

As Dylan sang: “I Contain Multitudes.”

This book contains multitudes as well.

Martini Judaism
You support BDS? I’m quitting your fan club!
Follow us on Facebook!
Submit your photos to RNS