The vigil was not a protest but a “spiritual gathering,” said Melina Abdullah, co-founder of the Los Angeles chapter of Black Lives Matter. Abdullah said they will be protesting in the coming days against police response to traffic, mental health and school-related incidents. But, Saturday’s convening was meant to “give love and our spiritual energy to the family.”

“We have to summon spiritual energy,” Abdullah said. “It’s spirit that will get as much justice as we can in Keenan’s name.”

In unison, attendees chanted “Asé” as they recited Anderson’s name and the names of others who were killed by police. It was part of an African libation ritual led by activist Dominique DePrima “to call in spirit.” A Yoruba term, Asé is used by practitioners of Ifa, a faith and divination system originating from West Africa.

Several dozens attended the gathering, lighting candles and placing flowers on the corner of Venice and Lincoln boulevards, the site of the Jan. 3 encounter, in which body-camera footage shows an officer’s elbow  pushed into Anderson’s neck. The same officer’s forearm also pressed against his chest.

“They’re trying to George Floyd me,” Anderson said as an officer threatened to use a stun gun, which was repeatedly deployed seconds later as Anderson was face down on the pavement and begged for help, according to the Associated Press. Anderson went into cardiac arrest hours later. 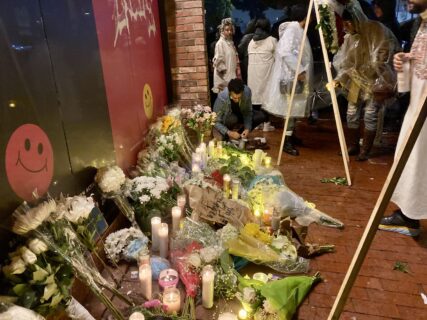 People leave flowers and candles on Saturday, Jan. 14, 2023, at a vigil in honor of Keenan Anderson on Venice and Lincoln boulevards in Los Angeles. RNS photo by Alejandra Molina

LAPD Chief Michel Moore said Anderson was the suspect in a hit-and-run traffic collision and initially complied with officers’ orders as they investigated whether he was under the influence of drugs or alcohol. He later fled, and officers chased him into the middle of the street, according to Moore.

“We don’t have to live like this,” Cullors said on Saturday, noting that this year will mark the 10th anniversary of Black Lives Matter.

“Ten years later, I stand in front of you on Venice and Lincoln, where my cousin begged for his life … No human being deserves to fear for their life in the last hours of their life,” she said.

The Rev. James Thomas with Clergy for Black Lives prayed for God to remove Moore from his position and for Anderson’s family “to understand that we are with them, not just as we pray, but as we fight for justice in his name.”

“Why does this continue to happen to our people?” asked Thomas. “Why do we continue to have to endure white supremacy and evil in those who are supposed to serve and protect us?” 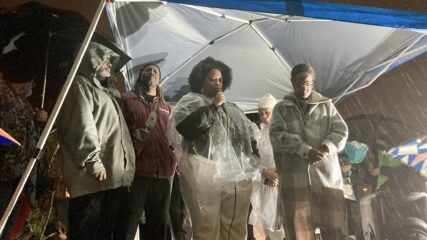 Black Lives Matter co-founder Patrisse Cullors speaks Saturday, Jan. 14, 2023, during a vigil in honor of her cousin Keenan Anderson, who died after he was repeatedly tased by police. RNS photo by Alejandra Molina

Uplifting the names of victims goes beyond creating hashtags, Cullors has said.

“It is literally almost resurrecting a spirit so they can work through us to get the work that we need to get done,” she said during a 2020 conversation about the spirituality of Black Lives Matter.

By highlighting their names, Cullors said she feels “personally connected and responsible and accountable to them, both from a deeply political place but also from a deeply spiritual place.”