(RNS) — An interfaith group of clergy has filed a lawsuit challenging Missouri’s strict abortion ban, arguing the statute violates the state’s constitution by imposing one set of religious values on all residents.

Advocates announced the lawsuit on Thursday (Jan. 19) from the sanctuary of Christ Church Cathedral, an Episcopal church in St. Louis.

“The Missouri Constitution ensures a strict separation of church and state,” the Rev. Traci Blackmon, a local pastor and denominational official with the United Church of Christ, said at the news conference. “Our elected officials have violated their oath to uphold that constitution by weaponizing religious beliefs to deny abortion access in a state where studies prove these actions are not the will of the majority of the people.”

Blackmon, who is also a plaintiff in the case, later added: “I am not here to debate the morality of abortion with anyone. I’m here to defend women and birthing people’s right not to have to.”

The lawsuit targets a 2019 Missouri law that permits abortion only in a medical emergency. One of many state-level “trigger” laws, the ban was inert until the Supreme Court overturned Roe v. Wade last summer, upending nearly 50 years of nationwide abortion access and returning the debate to the states.

Plaintiffs argue the ban reflects a specific religious understanding of abortion, noting that some lawmakers openly invoked religious rhetoric while promoting the bill and even wrote theological arguments into the legislation: The law refers to “Almighty God” as the “author of life” and contends “the life of an individual human being begins at conception.”

“State officials have weaponized their religious beliefs to control the bodies and deny the autonomy of women and all who can become pregnant, jeopardizing their health, lives, and futures,” the lawsuit reads.

Those involved with the suit hail from an array of religious traditions that don’t preach blanket opposition abortion theologically or, in some cases, even require it under certain circumstances. In addition to UCC ministers such as Blackmon, plaintiffs include leaders from Modern Orthodox and Reform Judaism, Unitarian Universalist ministers, an Episcopal bishop and the Rev. Barbara Phifer — a retired United Methodist minister and state representative.

“Simply put, when Missouri lawmakers explicitly state that life begins at conception, that is a theological statement,” said Maharat Rori Picker Neiss, executive director of the Jewish Community Relations Council of St. Louis. “That is a religious statement. That is not a Jewish statement, and it violates the Missouri Constitution, which prohibits the establishment of religion.” 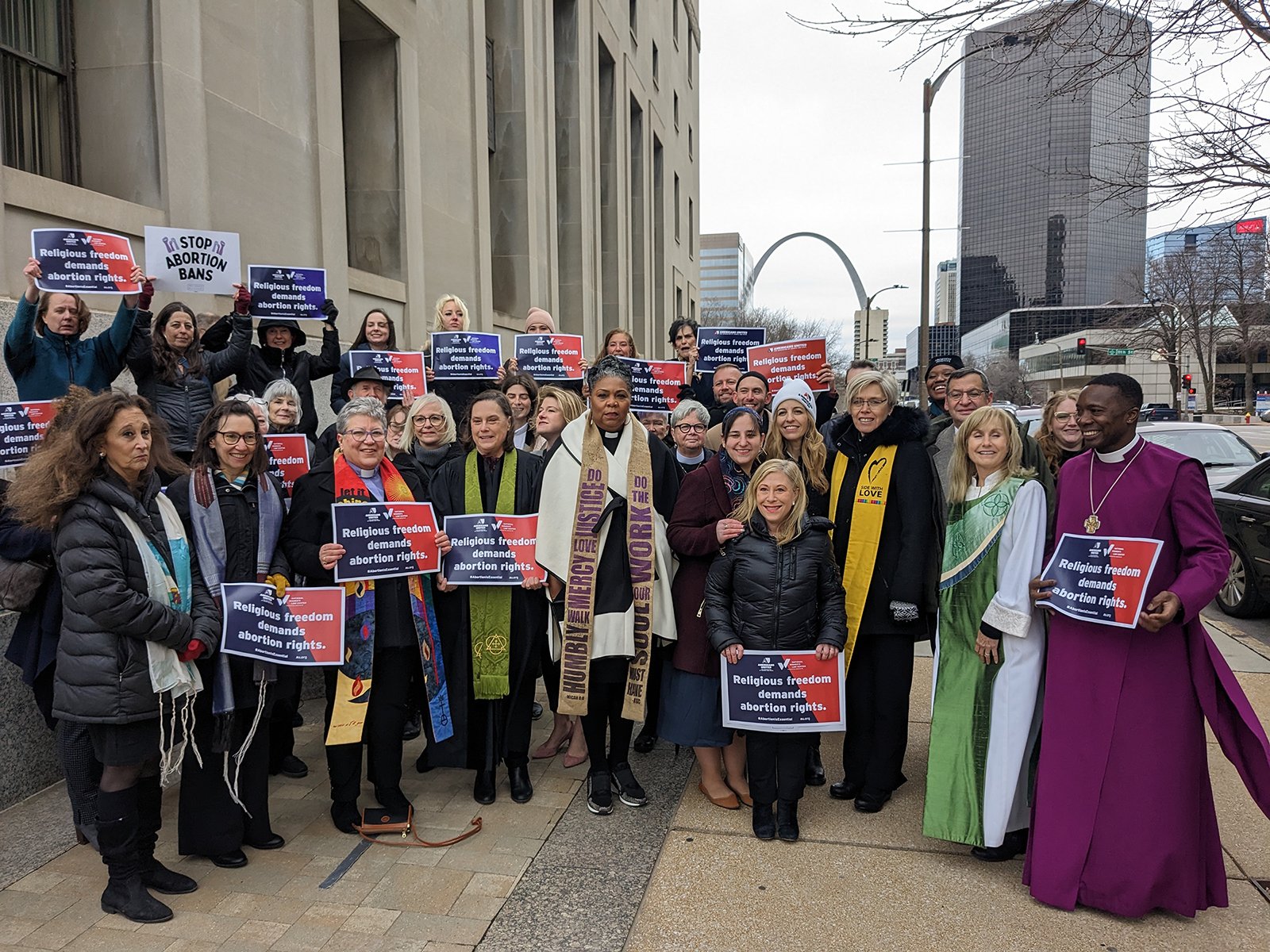 The plaintiffs are backed by Americans United for the Separation of Church and State as well as the National Women’s Law Center. The law firm Arnold and Porter is also lending its legal muscle to the case.

AU head Rachel Laser, who previously worked at the National Women’s Law Center, acknowledged some may be “surprised” to see the lawsuit unveiled at a cathedral. But she and other speakers highlighted support for abortion rights among people of faith: A majority of adherents to most major religious traditions in the U.S. — including Catholics, mainline Protestants and Black Protestants — support making abortion legal in all or most cases, according to recent polls.

“The truth is that religious extremists and their lawmaker allies have waged a coordinated disinformation campaign to call all things that advance equality anti-religion or anti-Christian,” Laser said during the news conference. “Well, today’s lawsuit proves them wrong.“

The effort is the latest in a series of legal challenges filed by people of faith against state-level abortion bans across the country. Faith leaders in Florida, Kentucky and elsewhere have sued to stop abortion prohibitions in their states, often led by Jewish Americans who argue their tradition has long taught that abortion is not only permitted, but sometimes required.

But while some of those legal challenges argued for religious exemptions from abortion bans, the lawsuit filed by Missouri clergy takes a different approach by insisting the entire ban should be rendered void because it imposes specific religious beliefs on all Missourians. At least one lawsuit touting a similar argument halted an abortion ban in Utah last year, and Supreme Court Justice Sonia Sotomayor made reference to the idea in December 2021 during oral arguments in Dobbs v. Jackson, the case that overturned Roe v. Wade.

“The issue of when life begins has been hotly debated by philosophers since the beginning of time — it’s still debated in religions,” Sotomayor said during an exchange with a lawyer. “So, when you say this is the only right that takes away from the state the ability to protect a life, that’s a religious view, isn’t it?”