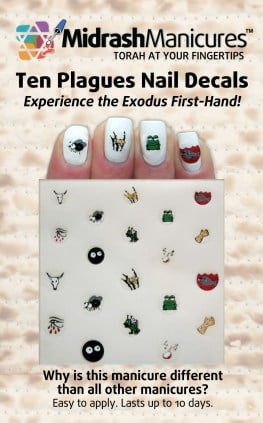 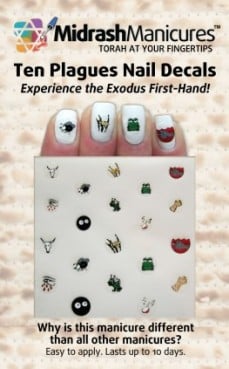 Ten Plagues nail art is a product of Midrash Manicures.

The new Pope Francis was once “dazzled” by a young woman he met as a seminarian and even considered abandoning his vocation, our own David Gibson reports. But what’s even newsier is that the new pontiff said (in a book soon to be released) that celibacy is “a matter of discipline, not of faith. It can change.” Is it me, or does that sound radically candid?

Check it out: Francis also said that atheists and believers can be “precious allies” in their efforts “to defend the dignity of man.

Some 85 percent of all U.S. adults had a favorable view of the new pope, including 94 percent of Catholics, according to a new Reuters/Ipsos poll.

Pope Francis’ spontaneity is turning into a huge headache for his security detail.

An artist in Milwaukee has created a portrait of former Pope Benedict XVI out of 17,000 condoms.

A majority of all major religious groups in the United States, support a pathway to citizenship for illegal immigrants currently living in the country, a new poll shows.

The former pastor of a northwest Indiana megachurch on Wednesday was sentenced to 12 years in prison for having a sexual relationship with a 17-year-old parishioner.

Reformers within Alcoholics Anonymous want to reclaim its spiritual roots.

Sister Simone Campbell is at it again: Surrounded by baskets of fish and bread, with the Capitol at her back, she and other clergy attacked the Republican budget plan.

Another win for the monks: A federal appeals court says Benedictine monks may keep selling caskets from their monastery near Covington, La. The three-judge panel of the 5th U.S. Circuit Court of Appeals upheld a district judge's ruling in favor of St. Joseph Abbey and against the state board of funeral directors.

Army psychiatrist Maj. Nidal Hasan will not be allowed to plead guilty to any charges in the deadly 2009 Fort Hood shooting rampage, a judge ruled. That’s because Army rules prohibit a judge from accepting a guilty plea to charges that carry the death penalty.

Cyclists are mixing religion and riding and discovering a unique spiritual and physical reciprocity. Imagine that, Lance.

If you feel like something’s missing from your upcoming Passover Seder Monday night, you might consider the new Ten Plagues Nail Decals, which feature—you guessed it—mini fingernail-ready depictions of each of the plagues.

Finally, to all 430 of you who completed our one-minute survey a few weeks ago, a big thank you! If you haven’t done so yet, here’s your chance to tell us how we’re doing. Please click here. (And for those of you still wondering, Zan Hale of West Chester, Pa. won our iPad Mini drawing.)

Don’t forget to sign up for the Roundup. You’ll have water cooler fodder all day.