In our first On Freedom country profile, Brian Pellot looks at the state of religious liberty in Malaysia.

Lamb of God’s flock of fans were disappointed earlier this month when Malaysian authorities banned the American heavy metal group from performing in the majority-Muslim country. Why? Because the band allegedly offended Islam by singing about the Quran and Allah in 2005.

Lamb of God is hardly the first American act to stir up controversy in this southeast Asian nation. Erykah Badu’s concert was canceled last year after authorities saw a promotional photo of the singer with “Allah” painted in Arabic above her left breast. Beyoncé scrapped her Kuala Lumpur concerts in 2007 and again in 2009 when members of the Pan-Malaysian Islamic Party derided her “Western sexy performances.” Protesters have demanded the Black Eyed Peas, Avril Lavigne, Gwen Stefani and Mariah Carey be banned from performing locally. Don’t expect Miley Cyrus to twerk her way across a Malaysian stage any time soon.

Artistic freedom is clearly restricted in Malaysia on religious and cultural grounds, but what’s the overall state of religious freedom in the country? 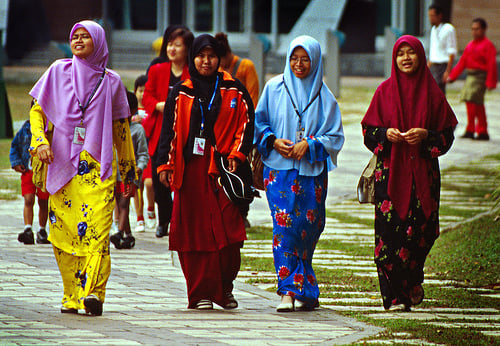 Malaysia’s federal constitution establishes Sunni Islam as the country’s official religion but states that “other religions may be practiced in peace and harmony.”

Peace and harmony may be a stretch. It’s more a system of double standards in which Sunni Muslims are granted some privileges not afforded to religious minorities but are also subject to greater scrutiny and government control over how they choose to worship.

Top government officials have long debated whether Malaysia is an “Islamic state” or rather a secular state with Islam as its official religion. Secular courts serve non-Muslims on all fronts whereas Shariah courts, often stricter and more conservative than their secular equivalents, address religious issues involving Muslims. Parents decide the official religious affiliation of their children, which is recorded on national identity cards and used “to determine which citizens are subject to Shariah law.”

Malaysia’s constitution bars discrimination against citizens on the basis of religion, but that provision stops short of protecting non-Sunni Muslims. Because the state can “control or restrict the propagation of any religious doctrine or belief among persons professing the religion of Islam,” members of minority Muslim sects, including Shias, are granted fewer religious rights than Buddhists, Christians or other minority faiths. More than 50 Islamic sects are banned as “deviant” and their followers prohibited from assembling or worshipping together in Malaysia.

A Malay person is constitutionally defined as someone who speaks the local language, conforms to local customs and “professes the religion of Islam.” In most cases, Malaysian Muslims are barred from leaving the faith. Muslims who threaten apostasy can be placed in religious rehabilitation centers and are seldom granted the right to convert. Religious minorities on the other hand are welcome to convert to Islam but are prohibited from proselytizing to Muslims.

The Malaysian government suppresses discussion of controversial religious issues and restricts anything that “might incite racial or religious disharmony,” according to the U.S. State Department’s 2012 international religious freedom report. Societal pressures also contribute to this suppression. Christians and other minority groups are forbidden to use the word “Allah” for God in Malaysia on the grounds that doing so amounts to proselytizing. In July, angry Islamists urged the Vatican’s envoy to apologize and leave the country when he said it seemed “logical and acceptable” for the Christian Federation of Malaysia to use the word when publishing Bibles in the country’s official language. Doing so was outlawed in 2008.

Religious institutions and buildings must be approved by and registered with the government. Several Hindu shrines have been demolished in recent years, including one earlier this month, allegedly because they existed on unsanctioned land. Many Hindus claim that discrimination is the real reason for their destruction, and the Hindu American Foundation lists Malaysia as an egregious violator of Hindus’ human rights.

Muslims are forbidden to eat pork, but non-Muslims are permitted to consume it in Malaysia, albeit with some restrictions. A non-Muslim couple was arrested earlier this year on sedition charges for posting a Ramadan greeting to Muslims on Facebook that showed the pair eating pork stew.

Homosexual acts are illegal in Malaysia, and LGBT individuals face both legal and social discrimination. Anwar Ibrahim, current leader of the opposition and former deputy prime minister, was hounded for years with criminal charges of sodomy, which he alleged were politically motivated. Last year the government began holding seminars to teach parents and teachers how to spot gay children in an effort to combat the perceived “problem” of homosexuality.

The Malaysian government asserts that all people and religious groups have the right to profess, practice and propagate their faiths — as long as doing so does not violate laws related to public order or morality. As far as religious freedom and human rights are concerned, these caveats are crucial.