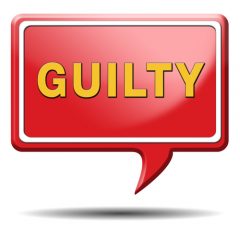 Guilty. By Dirk Ercken via Shutterstock

GUILTY: The Rev. Frank Schaefer, of violating church law for officiating at the 2007 wedding of his son and another man. A United Methodist jury handed down the verdict Monday night and considers his punishment today. It could mean the loss of his clergy credentials.

“A Manual For Creating Atheists” by mild-mannered non-theist Peter Boghossian is flying off the shelves, writes Kimberly Winston. No anti-religion screed, but a handbook that promotes a friendly, reasoned argument to strip the faithful of their faith, it could be a fearful thing for those who worry about the rise of the nones.

Women and girls are committing to  “No Makeup November,” the project a Christian girls ministry that wants female people to remember that they are beautiful just as God made them, writes Katherine Burgess. Great idea, but wouldn’t “No Makeup July” work better, when many of us are not looking quite so pasty?

Just remember girls, #NoMakeupNovember !! God made you PERFECTLY in His eyes & you should feel confident enough to not wear make up! 🙂

Trouble for the star of Snake Salvation, the reality show about a snake-handling pastor. Tennessee wildlife officials have confiscated more than 50 venomous snakes from Andrew Hamblin’s Pentecostal church.

In the latest episode of the Cheney family’s public spat over same-sex marriage, Dick sides with Liz. (May we be forgiven for any glee we may feel as this unfortunate familial struggle continues.)

JFK and C.S. Lewis died on the same day, Nov. 22, 1963. Here’s an interesting compare/contrast of their approaches to their shared faith and its place in the public square.

A new gig for Bishop James Tengatenga of Malawi, whose appointment at Dartmouth was rescinded because of his past anti-gay comments. The bishop, whose says his views have since changed, will now serve as a presidential fellow at Episcopal Divinity School in Cambridge, Mass.

You scrimp to send the kids to college and then they sign up for Zombies 101. Monmouth University in New Jersey is the latest to offer a course on the pop culture zombie phenomenon.

Andrew Hamblin, 21, pastor of Tabernacle Church of God in LaFollette, Tenn., looks into the eyes of a rattlesnake at the church alter while others sing songs during church service on April 13, 2012.  Hamlin is part of a new generation of serpent handling Christian, a 100-year old faith tradition in Tennessee. Since the early 1900s, a handful of true believers in East Tennessee and other parts of Appalachia have practiced the so-called signs of the gospel, found in a little-known passage in the King James Version of the Gospel of Mark: “And these signs shall follow them that believe; In my name shall they cast out devils; they shall speak with new tongues; They shall take up serpents; and if they drink any deadly thing, it shall not hurt them; they shall lay hands on the sick, and they shall recover.”  While other churches ignore this passage or treat it metaphorically, serpent handlers follow it literally. Their intense faith demands sinless living and rewards them with spiritual ecstasy in the chance to hold life and death in their hands.

Jerusalem is a no-fly zone, so how they heck did they make this IMAX, 3D movie of all those religious sites and rites? I talked with the producer, wrote a story about it, and recommend the film even though I watched it on my laptop. So imagine how cool it must be on a screen a thousand times bigger than my laptop — and without the lap burn.

Not in the Buddhas Image. The Rohingya Muslims in Myanmar (Burma) saw 240 of their own killed in Buddhist mob violence in the past year. Now an Islamic group is demanding that the government extend basic protections and rights to the little known group.

On the 75th anniversary of the death of Mustafa Kemal Ataturk, secularists in Turkey see the legacy of the founder of the modern secular republic under threat.

A Shiite professor and his driver were shot dead in Pakistan today, the latest incident of sectarian violence this month as the minority Shiites observe Muharram, an annual mourning period often marked by Sunni/Shiite tensions.

Small World: Because the parishioners of Holy Angels Catholic Church in Sturgis, Mich., donated money to the poor in the Philippines, a shelter was built and more people in the town of Cangumbang survived Typhoon Haiyan than would have otherwise.

More on the storm: The L.A. Times takes us to a church in the wrecked city of Tacloban, and paints a sad and lovely portrait of the role of the church in helping the Philippines, which is 80 percent Catholic, recover.

A rave review for the new book “Philosophical Religions: From Plato to Spinoza,” appears in the new edition of the New Republic. Author Carlos Fraenkel argues that a strong philosophical approach to religion stretches as far back as late antiquity, and was shared among Christian, Jews and Muslims.

Whether you like your religion philosophical or literal, sign up below for the Religion News Roundup. It’s free and spam-free, delivered every day to your inbox.