(RNS) In November of 1963, C. S. “Jack” Lewis knew he was dying. The Irish-born literary scholar, children’s author, and Christian apologist had come out of a coma in July, only to be diagnosed with end-stage renal failure. He retired from his post at Cambridge University, choosing to die at home in the Kilns, where he lived with his brother, Major Warren (“Warnie”) Lewis.

On Friday, Nov. 22, he retired to his bedroom after lunch. At 4:30 p.m. GMT he took some tea. An hour and a half later, Warnie heard a crash and discovered Jack unconscious. Within three or four minutes, he was dead, exactly one week shy of his 65th birthday.

A few minutes later (11:39 a.m. CST), Air Force One touched down at Love Field in Dallas, Texas, as a motorcade prepared to take President John F. Kennedy and his wife Jacqueline, along with their entourage, to the Dallas Business and Trade Mart. But the motorcade never arrived at its destination.

After the president suffered mortal gunshot wounds to the head at 12:30 p.m., his limousine rerouted to Parkland Memorial Hospital where the 46-year-old president was dead upon arrival.

It is no surprise that the death of the Irish-American Jack — the leader of the free world in his prime, tragically murdered in public view — overshadowed the quiet death of the Anglo-Irish Jack, a man who never held public office and who only had a few people at his funeral, but whose fame and fans continue to increase 50 years hence.

Given that both men had to navigate the tension between private faith and the public square, it is fitting on the 50th anniversary of their deaths, which falls Friday (Nov. 22), to compare and contrast their approaches. 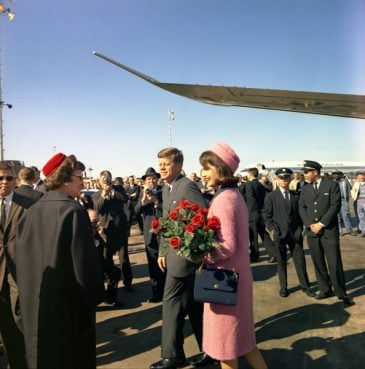 Lewis had become a devout Christian in his early thirties, so much so that a friend once referred to him as “the most thoroughly converted man I ever knew.” But he did not believe in theocracy, calling it “the worst of all possible governments.” Lewis did not blame the tyranny of religious fanatics for their religion, but rather for their hubris and pride.

For Lewis, the fundamental issue was not the content of a leader’s beliefs, but his humility and orientation to power and authority. He wrote, “The higher the pretensions of our rulers are, the more meddlesome and impertinent their rule is likely to be.”

While Lewis was playing offense against this ultimate undermining of true religion, Kennedy had to play defense. He was, of course, our first (and thus far only) Roman Catholic president. The novelty of a Catholic seeking the president in a historically “Protestant” country required that he offer reassurance that his religious convictions were compartmentalized from public positions.

Kennedy insisted that his religious views are “his own private affair” and that no one should vote against him (or for him, for that matter) simply because of his affiliation with the Catholic Church. Kennedy wanted Jefferson’s wall of separation to be high and impenetrable, but he wanted both sides to know their place.

But what of Kennedy’s claim that his religious views are his own private affair? Today, of course, the idyllic picture of Camelot and the Kennedy family has been marred by subsequent revelations and allegations of sexual indiscretions and adulterous liaisons in his private life. While the extent of his infidelity may never be known with precision, virtually no one disputes that his personal life was marked by extensive unfaithfulness to his marriage vows. Thus, whatever was exerting influence on Kennedy’s personal sexual behavior, it was not the ancient values of Christian morality.

Lewis would have been deeply suspicious of a politician like Kennedy who once said, “Our problems are man-made; therefore, they can be solved by man. And man can be as big as he wants. No problem of human destiny is beyond human beings.” Lewis may have agreed that all of our problems are man-made (with some assistance from a darker power). However, Lewis would insist that precisely because our problems are man-made, the ultimate solution must lie outside of ourselves, in the Creator God who made us and sent his Son to deliver us from all evil, whether political or personal.

It is this good news that ultimately arrested Lewis’ own slide into debauchery and bleakness as a young man. Christianity was not wish fulfillment for Lewis, something he had been preconditioned to receive. Rather, he described himself as “the most reluctant convert of all time,” coming to Christianity “kicking and screaming.” But he had been confronted with the truth of the Christian gospel and could not turn away. And it is this same gospel that confronts each of us as individuals with its demand to surrender, to bow the knee, to lose our life, and then offers us deliverance from all of our pettiness and pretensions, our envy and debauchery, our pride and deceit.

And so, on the 50th anniversary of their deaths, we would do well to consider what the beliefs and actions of these two Jacks have to offer us — for good and for ill, both in terms of our politics and our own private lives.

(Joe Rigney is assistant professor of theology and Christian worldview at Bethlehem College and Seminary and the author of Live Like a Narnian. Justin Taylor is senior vice president and publisher for books at Crossway and the co-author of The Final Days of Jesus.)

Opinion
What evangelical men can learn from Amy Grant and Annie F. Downs
Follow us on Facebook!
Submit your photos to RNS