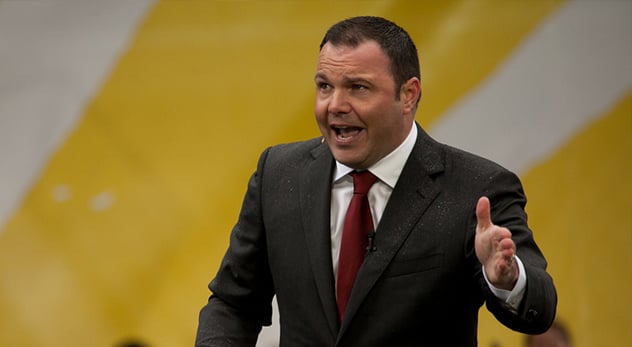 Syndicated Christian radio host Janet Mefferd accused Seattle pastor Mark Driscoll of plagiarism on her Nov. 21 broadcast. Mefferd claimed that Driscoll quoted extensively from the work of Dr. Peter Jones for at least 14 pages in his book, A Call to Resurgence, without direct or proper citation.

“In this book,” Driscoll responded, “I took [Jones’] big idea and worked it out through the cultural implications but I wasn’t working specifically from his text.”

Peter Jones is an author and adjunct professor at Westminister Seminary California whose areas of interest include “ancient and medieval paganism.” Driscoll said that most of what he’s learned from Dr. Jones was acquired in conversations over meals where Driscoll was not taking notes.

“Don’t you think that it’s important when you’re using someone else’s materials that you footnote the person?” Mefferd pressed.

Driscoll acknowledged that he, in fact, did make mention of Jones in the footnotes once, though it was an unspecific citation without page numbers.

“If I made a mistake,” he said, “then I apologize to Dr. Jones, my friend…that was not my intent, for sure.”

But this did not satisfy Mefferd, who continued to press Driscoll: “It troubles me, though, Mark because I’ve read Peter Jones, I know Peter Jones … and this is his intellectual property and you don’t give him any credit for it.”

At this point, the interview grows tense. Driscoll accused Mefferd of “having sort of a grumpy day” and “giving me orders in front of an audience.” He said that he believed the question was “rude”, “unkind”, and the intent behind it “is not very Christlike.”

“I don’t think we need to go ad hominem on me about it,” Mefferd responded. “You’re the one whose going to have to answer for this. It’s not right what you did, Mark.”

“This is not just unethical, I think,” she continued. “I think this is something you could be sued under under copyright law for intellectual property. I’m really concerned for the legal aspect for Tyndale House.”

I contacted the publicity department at Tyndale House Publishers and requested a comment on the matter. Todd Starowitz of Tyndale provided the following statement:

Tyndale House Publishers was provided a recording of the show by representatives of Pastor Driscoll. A number of people at Tyndale reviewed the tape and were stunned, not only by the accusations, but by the belligerent tone of Ms. Mefferd’s questioning. When Ms. Mefferd asked Pastor Driscoll her first question to accuse him of plagiarism, she did not invoke Peter Jones’s name. The first person that Pastor Driscoll credited in his response was Mr. Jones. Pastor Driscoll also credits Mr. Jones in the section that Janet refers to in Mark’s book, A Call to Resurgence.

Tyndale has taken immediate steps as in the process of reviewing the section of Pastor Driscoll’s book that has been called into question. Pastor Driscoll has also reached out to Mr. Jones and we expect to be able to release some information on his reaction to the interview very soon.

He went on to say that though Mefferd accused Driscoll of hanging up on her at the end of the interview, in the raw audio provided by representatives of Driscoll, he is clearly heard saying, “I’m still here.” (RNS has obtained a copy of the last two minutes of raw footage, which can be heard here.)

Indeed, Mefferd is claiming that Driscoll hung up on her:

Driscoll himself has been outspoken on the matter of plagiarism. The FAQ section on the Mars Hill Church website warns against stealing Driscoll’s intellectual property. In his book, Vintage Church, Driscoll spoke out against preaching other pastor’s material:

Do not speak anyone else’s messages. Doing so amounts to plagiarism, unless you get permission. Worse, it subverts God’s work in and through you… If you use the work of others, you are not a teacher, and you should quit your job and do anything but speak. (p. 105)

Telephone and email requests for an official comment left with Driscoll’s Mars Hill Church and Communications Manager Justin Dean on Friday were not returned.

The edited interview can be heard here:

**UPDATE: Tyndale has provided the last two minutes of the raw audio file, which prove Pastor Mark Driscoll did not hang up as Mefferd has claimed: http://audiour.com/playlist/3lewj0or**

**RELATED: See my follow-up column on new developments in this story: “More allegations of plagiarism surface against Mark Driscoll”**