I’ll take a Ham on Nye, please, with a side of controversy. Kimberly Winston breaks down why the upcoming cage match between Bill Nye the Science Guy and the Creation Museum’s Kenneth Ham is summoning images of the Scopes Monkey Trial, both for good and bad. 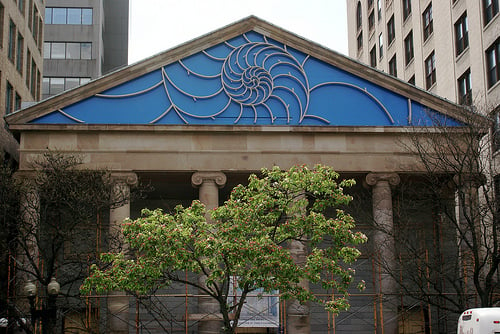 Favorite story of the day: St. Paul’s Episcopal Cathedral in Boston has finally filled in the triangle-shaped pediment on its facade with … wait for it … a giant nautilus shell that’s lit up at night like a Vegas show girl. It’s supposed to be a metaphor for spiritual growth, but as one blogger put it, “(St.) Paul was pushed aside for a seashell” and some people are either confused or annoyed. The artist explains his “spiritual-but-not-religious” vision here.

Sikhs are sick and tired of all the bullying, thank you very much, and are gently pushing back. Lauren Markoe also provides an easy-to-digest primer on Sikhism 101. Fun fact: It’s technically pronounced “sick,” but the better-known “seek” is equally acceptable.

Top Tweets of the day:

True confession: I used to pray for the Red Sox to win.
Here's why@publicreligion @WSJhttp://t.co/G28Iv3Q0bp

Everything you need to know about Scarlett and Sodastream

Have you seen the fuss over Scarlett Johansson and Sodastream and you still can’t figure out what all the fuss is about? My old boss Dale Hanson Bourke explains it all for you in 5 easy steps. And then, a real beverage crisis: the FAA says a Wisconsin brewery can’t use drones to deliver beer to ice fishermen.

More on the mandate (anyone else tired of this yet?)

Some 38 Christian leaders, theologians and pastors are asking the Supreme Court to protect Hobby Lobby and other businesses from the contraception mandate. Jonathan Merritt talks to some of them. U.S. Catholic bishops, in their appeal to SCOTUS, say religious business owners “should not be specially excluded from the freedom to practice their faith in daily life.”

Also worth your time:

We’ve all seen the stories of teachers fired from Catholic schools because they’re gay — but cafeteria workers? A Boston man has filed a discrimination complaint against an all-girls Catholic school after he was fired for listing his husband as his emergency contact. Matthew Barrett said he was never asked to sign a statement promising to abide by church teaching.

Thank you very much, Your Grace. Now go home.

Archbishop of Canterbury Justin Welby’s can’t-we-all-just-get-along appeal to his Anglican churches in Africa? Yeah, not so much, they say. FWIW, Episcopal Presiding Bishop Katherine Jefferts Schori issued her own appeal (timed to Welby’s trip, it seems) that says the U.S. branch of Anglicanism is firm that “No one of God’s children is worth less or more than another; none is to be discriminated against because of the way in which she or he has been created.”

And with that, we’re off to the weekend. Make sure you’ve signed up below to receive the Roundup every day, for free, in your inbox: