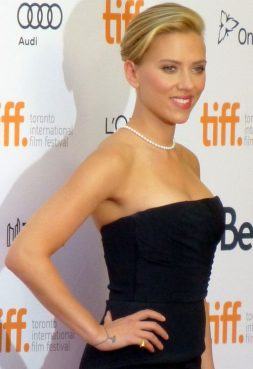 Scarlett Johansson at the Premiere of Don Jon during the 2013 Toronto Film Festival.

(RNS) In the run-up to the Super Bowl, advertisers work hard to get their money’s worth, even before their spot has run. They leak teasers and hype the stars who will appear in them. If they can find a way, they generate controversy.

This year, SodaStream is already the big winner in the controversy category. One of the dust-ups surrounds a tug of war between SodaStream and Oxfam International over Scarlett Johansson, who recently accepted a role with the carbonation company and will appear in its Super Bowl ad.

The problem is that the rapidly growing SodaStream happens to manufacture most of its products in an Israeli settlement in the West Bank.

The international charity made its displeasure clear, issuing a statement that read in part: “Oxfam believes that businesses, such as SodaStream, that operate in settlements further the ongoing poverty and denial of rights of the Palestinian communities that we work to support.”

Johansson, the daughter of an American Jewish mother and a Danish Christian father, defended SodaStream as a “bridge-builder” between Israelis and Palestinians and noted that the company employs Palestinians and treats them equally.

But supporters of the Boycott, Divestment and Sanctions movement demanded that Oxfam sever ties with Johansson, comparing her to entertainers who ignored apartheid in South Africa in order to profit from performances.

What role does a company like SodaStream play in the Israeli-Palestinian conflict? Here are some of the basic facts:

1. SodaStream machines are manufactured in an Israeli settlement.

SodaStream’s principal manufacturing plant is in the industrial park of the Ma’ale Adumim settlement, a community of approximately 40,000 people located about seven miles from Jerusalem, well within Palestinian territory.

The third largest West Bank settlement has been in the spotlight because a proposed highway project, called the E1, would connect Ma’ale Adumim to Jerusalem, bisecting the West Bank and making it difficult for Palestinians in the northern part of the West Bank to travel to the southern part, as well as reach East Jerusalem.

An article about the settlement in the December 2012 issue of Foreign Policy magazine was titled “The Settlement that Broke the Two State Solution.” Ma’ale Adumim’s former mayor has been quoted as saying the settlement was built to make a contiguous Palestinian state impossible.

According to the website for the industrial park that houses the SodaStream plant, there are now 230 plants and businesses in the location.

Israeli communities built outside the 1967 armistice line (often called the “Green Line”) are considered settlements. Israeli building in the West Bank, defined as occupied territory, is illegal under international law. Approximately 350,000 Israelis live in settlements (with another 200,000 in East Jerusalem, which was annexed by Israel).

While some settlements built near the Green Line may be part of a negotiated “land swap,” settlements like Ma’ale Adumim are too far inside Palestinian territory to be considered and are too large and established to be given up easily by the Israelis who live and work there.

The World Bank estimates the unemployment rate in the West Bank at 22 percent. SodaStream employs approximately 900 Palestinian workers from East Jerusalem and the West Bank, making it one of the largest employers of Palestinians.

The West Bank plant predates the CEO of SodaStream, Daniel Birnbaum, who said he wouldn’t have built a plant in that location and is currently building a larger plant within Israel. But he also notes that he gives equal compensation and treatment to his Palestinian employees and refuses to bow to pressure to close the plant, saying in an interview with The Forward, “I just don’t see how it would help the cause of the Palestinians if we fired them.”

The Boycott, Divestment and Sanctions movement against Israel is modeled on the campaign used to pressure South Africa to end apartheid. It calls for the boycott of Israeli products as well as sporting, cultural and academic events held in Israel, and divestment of holdings in Israeli companies until Israel ends the occupation of Palestinian territory.

Popular in Europe, the movement has led to some stores refusing to stock Israeli products, the requirement that products produced in settlements be labeled and a drop in revenue for products made in Israel. Many performers have also refused bookings in Israel.

A recent resolution by the 5,000-member American Studies Association bans “formal collaborations with Israeli academic institutions, or with scholars who are expressly serving as representatives or ambassadors of those institutions.”

Some American mainline church bodies also support the BDS movement and ask their congregations to boycott products such as SodaStream, Ahava cosmetics and Sabra hummus.

5. Supporters of the “two-state solution” do not necessarily embrace the BDS movement.

For some supporters of the two-state solution the BDS movement is a step too far.

Some see it as an attempt to punish Israel and all Israelis for the occupation of the Palestinian territory. Others say it evokes experiences from the past when Jews were ostracized and Jewish businesses were targets of anti-Semitism. Some say it is part of an international movement to de-legitimize Israel.

Some Israelis also make a distinction between settlers who are hostile to Palestinians and those who seek to live together peacefully, including those who employ them in the settlements.

But most Palestinians reject this thinking, feeling it is at best a move to “normalize” the current situation or at worst, a collaboration with the enemy.

While some critics have labeled Johansson naïve or accused her of simply choosing a more lucrative deal, others welcome the opportunity to discuss the situation. For SodaStream, the Super Bowl ad and its new spokeswoman will bring attention to a company that claims to be trying to do the right thing in a bad situation.

(Dale Hanson Bourke is the author of “The Israeli-Palestinian Conflict” (IVPress, 2013). She can be followed @DaleHBourke.)

News
‘Til Kingdom Come’ examines link between end-times theology and Israel politics
Follow us on Facebook!
Submit your photos to RNS