(RNS) Even as some prominent Christians are calling on the U.S. to take more forceful military action against Islamic extremists in Iraq and Syria, more than 50 mainly Catholic and Protestant leaders are telling President Obama to halt American airstrikes and pursue solely peaceful means to resolve the conflict.

“While the dire plight of Iraqi civilians should compel the international community to respond in some way, U.S. military action is not the answer,” the 53 clergy, theologians and religious sisters and brothers write in the Aug. 27 open letter. While Pope Francis recently said it was “licit to stop the unjust aggressor” -- referring to the Islamic State, or IS -- the pontiff underscored that he was not endorsing bombing or warfare. Creative Commons image by Catholic Church England and Wales

“Lethal weapons and airstrikes will not remove the threat to a just peace in Iraq,” they continue. “As difficult as it might be, in the face of this great challenge, we believe that the way to address the crisis is through long-term investments in supporting inclusive governance and diplomacy, nonviolent resistance, sustainable development, and community-level peace and reconciliation processes.”

The signatories note that while Pope Francis recently said it was “licit to stop the unjust aggressor” -- referring to the Islamic State, or IS -- the pontiff underscored that he was not endorsing bombing or warfare.

Others include Susan T. Henry-Crowe, general secretary, General Board of Church and Society for the United Methodist Church, and the Rev. Gradye Parsons, stated clerk of the Presbyterian Church (USA) General Assembly, in addition to numerous university professors and other Protestant denominational leaders.

The signers argued that many factors contributed to the current volatile mix in the Middle East, including past U.S. political and military campaigns in the region. And they point to the American strikes that helped oust Libyan dictator Moammar Gadhafi in 2011 as an example of how that approach has backfired. 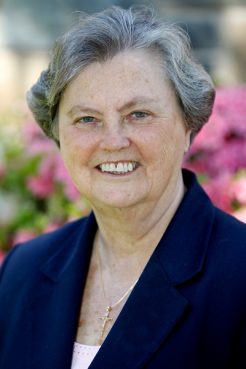 The letter writers list eight specific recommendations for their “just peace” agenda, including an arms embargo and financial sanctions on the armed groups.

This week’s letter stands in stark contrast to a petition launched earlier this month by more than 50 Catholic, evangelical and Jewish activists who demanded that Obama sharply escalate military action against Islamic extremists in Iraq. They said “nothing short of the destruction” of the Islamic State can protect Christians and other religious minorities.

Also this month, Robert P. George, a prominent Catholic conservative and Republican activist at Princeton University, told televangelist Pat Robertson that the U.S. has to lead a campaign to destroy the IS, and he said he would support sending ground troops to Iraq if that’s what it takes to do the job.