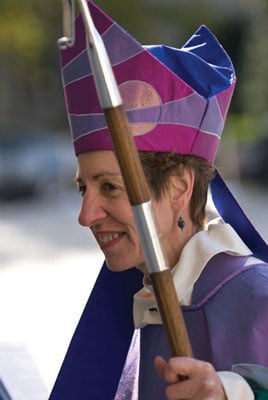 Episcopal Presiding Bishop Katharine Jefferts Schori, seen here at her 2006 installation at Washington National Cathedral, was told to remove her miter (bishop's hat) when she preached at services in London, in part because the Church of England does not allow women bishops.
September 23, 2014
Sarah Pulliam Bailey 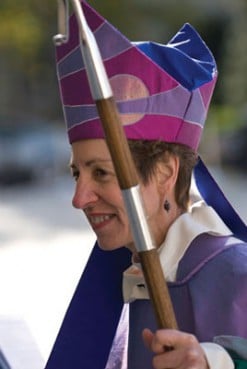 Happy first-day-of Autumn, everybody. Here's a quick rundown of what you need to know today:

A Chinese court imposed a life sentence Tuesday on a Muslim scholar who championed the country's Uighur minority, receiving the most severe penalty in a decade for anyone in China convicted of illegal political speech.

A Portland immigration activist from El Salvador has taken sanctuary in an Oregon church.

A federal appeals court has reinstated a Jewish group's lawsuit accusing a Connecticut district commission of religious discrimination when it rejected plans for a synagogue in 2007.

A senior tennis team with Orthodox Jewish members is suing the United States Tennis Association over its refusal to change a tournament schedule to accommodate the players’ observance of the Sabbath.

Religion loses clout: Why many say that’s a bad thing

How superstition may thwart Ebola’s eradication in Guinea

The Ice Bucket competitor: Can the Quran Challenge go viral?