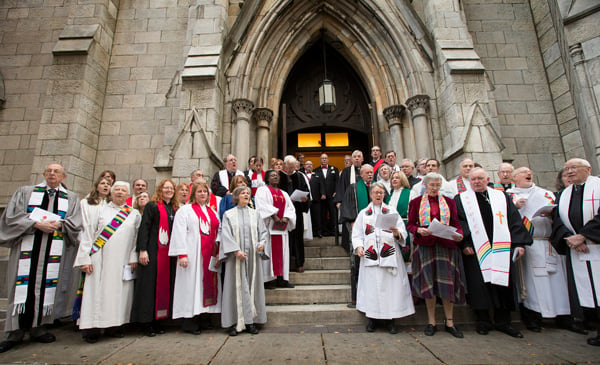 Clergy and faith leaders gather outside Arch Street United Methodist Church in Philadelphia in support of Richard Taylor and William Gatewood (at top of stairs in doorway) following their wedding in November 2013. Photo by Mike DuBose, United Methodist News Service

(RNS) United Methodists in Pennsylvania have agreed to resolve a complaint filed against three dozen clergy who blessed a gay wedding without taking the case to trial.

The resolution calls for the officiating clergy to acknowledge that they violated rules of the United Methodist Book of Discipline, which includes the denomination's constitution. In return, the complaint will be withdrawn.

"Though I may sympathize with the pastoral concerns of the respondents, it is unacceptable to disregard and disobey the Book of Discipline," Johnson said. "I pledge that, in future cases where clergy within my jurisdiction officiate or host a same-gender ceremony, any complaints that I receive will be handled swiftly and with significant and appropriate consequences, which may include a trial, involuntary leave of absence without pay, or other significant consequences, in accordance with the Discipline and in consultation with the Board of Ordained ministry and the clergy session of the annual conference."

The pastors officiating at the Philadelphia ceremony stood in solidarity with the Rev. Frank Schaefer, who also faced a church trial in Johnson’s area. A church court reinstated Schaefer this summer after he was defrocked in November 2013 for officiating at his son’s gay wedding.

The Philadelphia ceremony was held before same-sex marriage was legalized in Pennsylvania earlier this year. Church law prohibits clergy from participating in, or churches from hosting, "ceremonies that celebrate homosexual unions."

Against the backdrop of a campaign to "Stop the Church Trials," some Methodist bishops have tried to sidestep the painful court proceedings. Saying "church trials produce no winners," a bishop in New York agreed to drop charges against the Rev. Thomas Ogletree, a former dean of Yale Divinity School, who presided at his son's gay wedding.

The same-sex marriage debate has consumed America’s mainline Protestant denominations, with the outcome ranging from divisions to compromises.

The issue is especially divisive within Methodism, where holiness, an emphasis on Christian purity, is foundational. As Methodist membership grows in parts of Africa, overseas delegates have helped hold the line against growing pressure to liberalize church policy on gay clergy and same-sex marriage.

Amid a wave of open defiance over rules that prevent pastors from presiding at same-sex marriages and high-profile church trials that have largely upheld church policy, some UMC pastors previously said the 11.8 million-member church had reached an impasse.