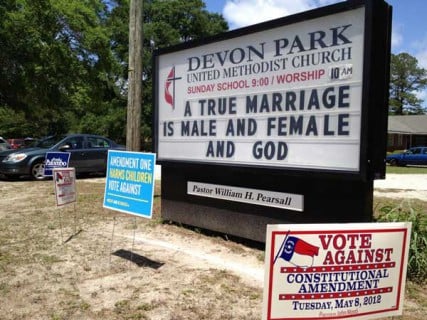 The sign outside the polling station at Devon Park United Methodist Church in Wilmington, N.C., exemplified this state’s struggle with a constitutional amendment to ban same-sex marriage in May 2012. Religion News Service photo by Amanda Greene

(RNS) Will the United Methodist Church soon have to drop the “United” part of its name?

A group of 80 pastors is suggesting that the nation’s second-largest Protestant denomination is facing an imminent split because of an inability to resolve long-standing theological disputes about sexuality and church doctrine.

But more than lamenting the current divisions, the pastors indicated there is little reason to think reconciliation — or even peaceful coexistence — could be found. Like a couple heading to divorce court, the pastors cited “irreconcilable differences” that can’t be mended.

“We can no longer talk about schism as something that might happen in the future. Schism has already taken place in our connection,” said the Rev. Maxie Dunnam, a retired president of evangelical Asbury Theological Seminary in Kentucky, who joined the statement.

It’s a marked shift in tone from 10 years ago, when conservatives rejected a proposal for an “amicable separation” as premature. “I don’t want us to talk about separation,” Dunnam said after the church’s 2004 assembly, before the same-sex marriage issue swept the nation. “That’s not a game where our energy needs to be focused.”

As 19 states and the District of Columbia now allow same-sex civil marriage, the debate has consumed America’s mainline denominations, with the outcome ranging from bitter divisions to agree-to-disagree compromises.

The issue is especially heightened within Methodism, where holiness — the beliefs and practices toward Christian purity — is foundational in its theology. And as Methodist membership plateaus at home and grows in parts of Africa, overseas delegates have helped hold the line against growing pressure to liberalize church policy on gay clergy and same-sex marriage.

Amid a wave of open defiance over rules that prevent pastors from presiding at same-sex marriages, and a host of high-profile church trials that have largely upheld church policy, some UMC pastors say the 11.8 million-member church has reached an impasse. Many feel that the sexuality debates simply touch on larger issues of how Methodists understand Scripture and how leaders uphold church teaching.

Frank Schaefer, a former Pennsylvania pastor, was found guilty of violating church law when he officiated at his son’s 2007 wedding, though his appeal will be heard on June 20. Schaefer was told he could keep his clergy credentials if he recanted his support of gay marriage, but he refused.

The tipping point for many conservatives came, however, after Bishop Martin D. McLee of New York announced in March he would drop a case against a retired seminary dean who officiated at his gay son’s 2012 wedding and called for an end to church trials for clergy who violate the denomination’s law on ministering to gays.

The pastors saw McLee’s move as failing to uphold agreed-upon church teaching. He should have gone through proper means of changing the church’s stance on sexuality, they say, rather than declining to uphold the church’s Book of Discipline, or constitution.

“Tensions are reaching a point where it’s become a destructive scenario,” the Rev. Larry Baird, pastor of Trinity United Methodist Church in Grand Island, N.Y., said in an interview. He noted that leaving the denomination is not the group’s first option. “We’re hoping there’s a win-win way out for those in profound disagreement.”

Hailing from the UMC’s five jurisdictions, the group of 80 pastors and theologians released a statement Thursday (May 22) outlining the crisis they see emerging within the UMC. They pointed to pastors who violated the Book of Discipline, a lack of subsequent punishment, a crisis over the authority of Scripture and differences in how leaders are teaching the practice of holiness.

Traditionalists believe the Scriptures are clear in prohibiting same-sex relations, while progressives see full inclusion as a matter of God’s love and justice, they note in the release.

Most recently, the UMC decided to expand benefits of its agencies’ employees to include same-sex spouses who live in states that allow same-sex marriage, even though same-sex partners can’t get married within the UMC.

Other mainline denominations have already gone through many variations on same-sex ordination and marriage, moving more quickly on the issue than the UMC, which has a global, more conservative membership; about one-third of the church’s members are found in Africa, Asia or Europe.

“Can we not learn from the pain that other mainline denominations have experienced and find a way forward that honors (Methodism founder John) Wesley’s rule that we do no harm?” the statement says. “A way where there are no winners and losers, but simply brothers and sisters who part ways amicably, able to wish each other well?”

The UMC declined to provide an official response.

One of the biggest challenges will be whether the UMC can find a way to remain the same home to people who hold radically different views. Delegates to the Methodists’ quadrennial General Conferences have resisted one option embraced by the Presbyterian Church (USA) that essentially allows regional bodies to set their own ordination standards.

For at least two decades, the UMC has strived to find ways to maintain the status quo without alienating either traditionalists or liberals. Despite its insistence on unified rules and standards, the church is nonetheless a diverse theological tent that counts everyone from former President George W. Bush to Hillary Clinton as members.

“The UMC is a pluralistic church with radically different points of views,” said William Abraham, a professor of Wesley studies at Southern Methodist University. “It shows how you can live with differences until it begins to bite into the practices of the local church.”