(RNS) Billionaire brothers Charles and David Koch recently made headlines by pledging nearly $900 million to help elect candidates who support their libertarian strain of economic conservatism, but the industrialists are also nearly doubling their investment in the business school of Catholic University of America, which is overseen by the U.S. bishops. 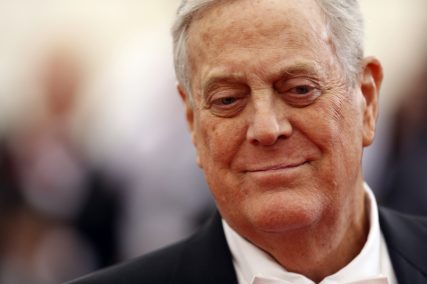 That’s despite the fact that many Catholics — including Pope Francis — say the kind of unregulated capitalism that the Kochs promote runs counter to church teaching.

The $1.75 million dollar grant from the Charles Koch Foundation, one of several nonprofits with ties to the industrialist brothers, is part of a $3 million pledge to CUA announced in January that includes $500,000 from the Busch Family Foundation and $250,000 each from three business leaders.

The donation to the Washington-based university comes just over a year after the Koch Foundation gave an initial $1 million grant that allowed CUA to launch its own School of Business and Economics. The school is run by Andrew Abela and it is dedicated to promoting what it calls “principled entrepreneurship.”

The grant fits with the Kochs’ strategy of funding business and other programs at universities around the country. (They are also generous underwriters of numerous cultural institutions.) But from the moment the first CUA donation was announced in the fall of 2013, many Catholic theologians and others raised questions about why the only pontifical university in the country would take so much money from the Kochs.

Dozens of theologians and academics wrote to CUA president John Garvey and Abela expressing concern that “by accepting such a donation you send a confusing message to Catholic students and other faithful Catholics that the Koch brothers’ anti-government, Tea Party ideology has the blessing of a university sanctioned by Catholic bishops.”

They renewed that criticism last February, saying the Kochs’ libertarian-leaning positions “are in direct conflict with traditional Catholic values.”

A few months later, at a conference sponsored by Catholic University’s Institute for Policy Research & Catholic Studies, the Honduran cardinal who is one of Francis’ top advisers blasted today’s free market system as “a new idol” that is increasing inequality and excluding the poor.

Cardinal Oscar Rodriguez Maradiaga was joined at the conference, and in his critique, by Bishop Blase Cupich, who in September was personally tapped by Francis to be the new archbishop of Chicago, the pontiff’s most important U.S. appointment to date.

Francis himself has focused on economic inequality in the nearly two years since he has been pope, repeatedly denouncing the current capitalist system and in particular the “trickle down” economics favored by many Republicans and libertarians.

Those statements have generated a great deal of friction and unusually direct and sharp criticism of Francis from Catholic conservatives, especially in the U.S. Some conservatives have responded by arguing that Francis is not talking about capitalism as it is practiced in the U.S., or that he simply doesn’t understand economics. 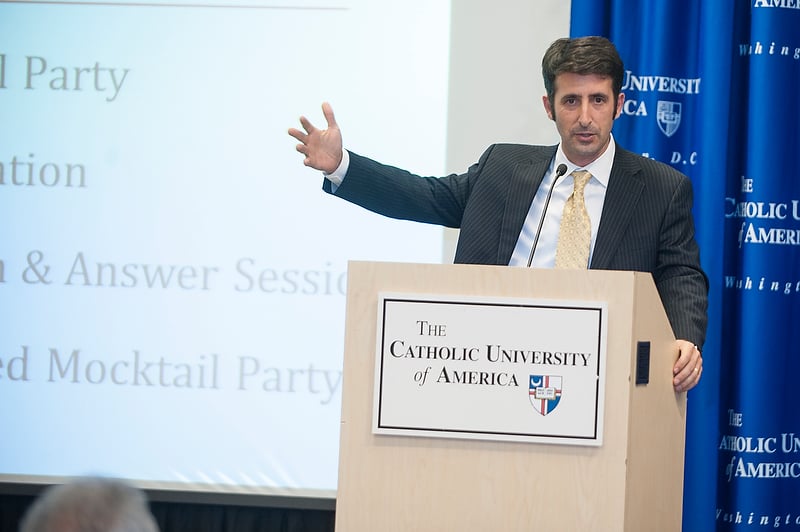 In a Jan. 22 statement announcing the new gift, Abela said that the donation will help the school create “a cadre of faculty dedicated to research exploring how we can make business and economics more humane.” As if anticipating criticism, he added that is also “a moral imperative that Pope Francis has been championing with great passion.”

That same day, Tim Busch, co-founder of the Busch Foundation and a Koch ally, wrote an op-ed in The Wall Street Journal arguing that “the principles behind this initiative and the principled entrepreneurship program are consistent with Catholic teaching.”

Critics said Busch was exaggerating that overlap and glossing over the real goals of libertarian free-market advocates, which they say are in no way compatible with church teachings.

While Busch is a practicing Catholic, the Kochs are not, and in fact David Koch supports gay marriage and abortion rights.

Critics of the CUA gift say it is ironic that the school would seek such massive support from a social liberal when Catholic charities are not allowed to take any money from any person or group that supports abortion rights or gay rights.