TORONTO (RNS) In groups of eight or so, riders wheeled their bicycles down the red-carpeted center aisle of Toronto’s Trinity-St. Paul’s United Church.

The white-robed officiant sprinkled holy water on about 50 riders’ heads, one by one, and on their bikes’ handlebars and wheels.

“May the road rise to meet you,” she pronounced. “May the wind be ever at your back; may all your journeying be joyous; may you and your bicycle be cherished in the Spirit of Life.”

It was the sixth annual Blessing of the Bikes at the downtown church — a type of local event that has become more common as a growing number of churches consider the idea that protecting the environment is not just a scientific or political debate, but a spiritual one.

The movement has grown in the past decade and crosses denominations. An “Evangelical Climate Initiative” issued in 2006 has been signed by hundreds of religious leaders, and the Vatican held a one-day summit in late April to  “elevate the debate on the moral dimensions of protecting the environment.” Pope Francis is preparing this summer to issue an encyclical — one of the most authoritative church documents — framing climate change action as a moral and religious imperative. 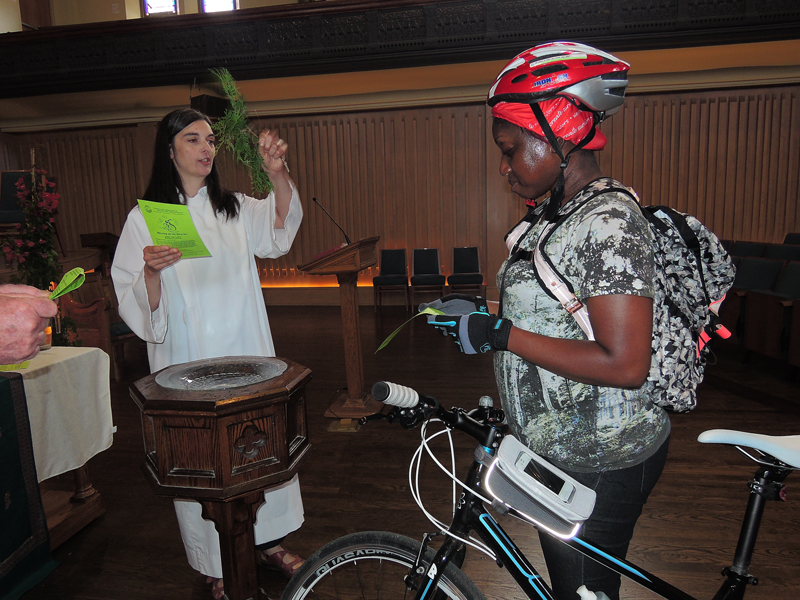 Using a sprig of cedar, officiant Ann Russell sprinkles holy water on a bike and its rider at the sixth annual Blessing of the Bikes at Toronto’s Trinity-St. Paul’s United Church on June 7, 2015. Religion News Service photo by Ron Csillag

A Reuters poll of 2,827 Americans in February found that two-thirds of respondents (66 percent) believe that world leaders are morally obligated to take action to reduce carbon dioxide emissions. And 72 percent said they were “personally morally obligated” to do what they can in their daily lives to reduce emissions.

Bicycles are one way to bring climate action down to the personal level. The first reported mass blessing of bicycles was held in 1999 at the Cathedral of St. John the Divine in New York City. Since then, bike blessings have spread to other cities, including Los Angeles and Melbourne, Australia.

There is something divine in a bicycle’s simplicity, said Ann Russell, a Master of Divinity student who presided over this week’s nondenominational Toronto service, in which she used a sprig of cedar to sprinkle water from the church’s baptismal font.

And riding a bike upholds the United Church’s teachings on the environment, she added.

“We have a strong commitment to live with respect in creation,” Russell said. “Celebrating riding bikes is a way to follow the commandment to tread lightly on the Earth.”

Invoking God’s blessings sends riders out “so they can be safe and all people who share the roads can be safe.”

Asked why she brought her battered white CCM bike to the service, Annie Thompson, a 56-year-old clothing designer and diehard cyclist, threw her head back and laughed. “This just exemplifies the beauty of cycling,” she said. “When I’m on my bike, I feel happy and free.”