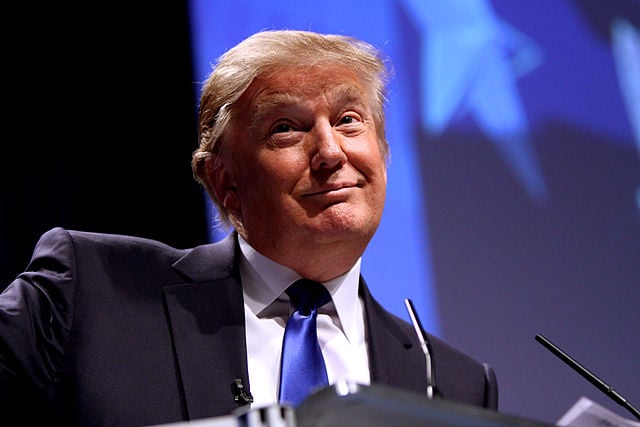 “I play to people’s fantasies,” Donald Trump wrote in his 1987 memoir, The Art of the Deal. “I call it truthful hyperbole,” he explained. “It’s an innocent form of exaggeration — and a very effective form of promotion.”

The Bible calls this kind of behavior “lying.” Why am I bringing up the Bible? Well, it’s The Donald’s favorite book. Or so he says.

That claim might be part of that truthful hyperbole that serves as promotion for the reality TV star seeking the presidency of the United States.

Trump is a lot of things, but stupid isn’t one of them. He clearly determined that the only way to win the Republican nomination was through an appeal to the conservative evangelical vote.

Despite his multiple divorces and remarriages, longtime support for abortion rights (until recently) and prideful self-aggrandizement, Trump has emerged as the favored candidate of evangelical voters.

In South Carolina, 33% of evangelical Christians back Trump, according to a recent Monmouth University survey. His closest rival was retired neurosurgeon Ben Carson at 18%.

Trump has been praised by Jerry Falwell Jr. as “one of the greatest visionaries of our time” and lauded by Franklin Graham for “shaking up” the political process.

At July’s Family Leadership Summit, Trump exclaimed, “People are so shocked when they find … out I am Protestant. I am Presbyterian. And I go to church and I love God and I love my church.”

Yes, that is shocking. After all, the Bible has a few things to say about humility, which is not exactly Trump’s strong suit.

Not particularly surprising was Trump’s inability to name a favorite verse in his favorite book. The schoolyard bully who last week publicly mocked Hillary Clinton aide Huma Abedin’s marriage claimed that to talk about a Bible verse would be too “personal.”

Twitter erupted with the hashtag #TrumpBible, along with Trump-style verses. “Took God 6 days to create the universe. Bad management. I would’ve done it faster, cheaper & Satan would pay for it,” read one. Another quipped, “Look I like Jesus. Anyone that can feed 5k people with 2 fish is sharp. Big mistake not charging. But I still like him.”

These are funny because they are so close to the truth. Trump is a dangerous megalomaniac with a distorted sense of reality.

When 30,000 people turned out to see Trump in Mobile, Ala., he told the crowd, “Now I know how the great Billy Graham felt.” (More than 2 million people attended Graham’s New York City crusade for 16 weeks in 1957.)

When asked at the Family Leadership Summit whether he had ever sought God’s forgiveness, Trump replied, “I am not sure I have. I just go on and try to do a better job from there. I don’t think so. … If I do something wrong, I think, I just try and make it right. I don’t bring God into that picture. I don’t.”

A Christian who has never sought forgiveness for his sins is like a vegan who has filet mignon for dinner every night.

Trump says he attends Marble Collegiate Church in New York, where the late Norman Vincent Peale — author of the self-help book The Power of Positive Thinking — was his pastor. It’s at this church that Trump presumably drinks “my little wine” and has “my little cracker,” as he described taking Communion recently.

Peale was a major figure in the fringy and theologically unsound “prosperity gospel” movement. Pastor Paula White, a prosperity gospel huckster, reportedly will host a meeting for Trump with Christian leaders. White frequently tells her flock to donate large sums of money to her ministry as a “seed” to ensure God answers their prayers.

She’s a scam artist. Just like Trump. Evangelical voters need to wake up.

(Kirsten Powers writes weekly for USA TODAY and is author of the upcoming The Silencing: How the Left is Killing Free Speech. This column first appeared in USA TODAY.)