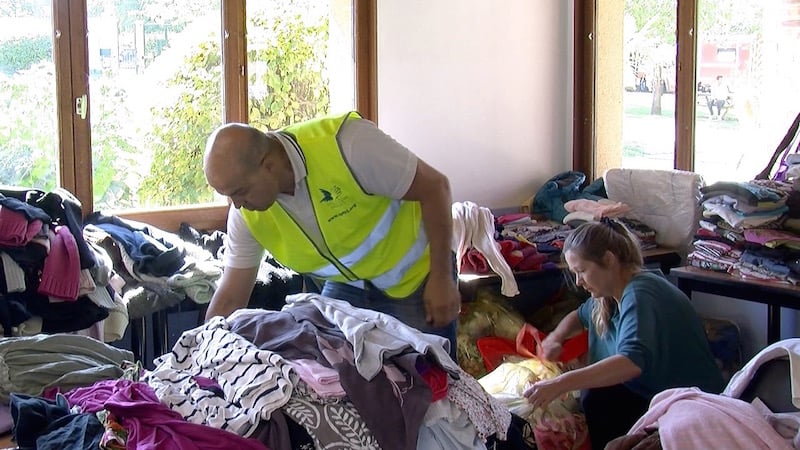 CERGY-PONTOISE, France (RNS) When the first wave of Syrians and Iraqis arrived at this northwestern Paris suburb, Nabil Seghari signed up to volunteer with the Catholic charity spearheading the welcome efforts.

“I’m a Muslim working for a Christian association,” said Seghari, whose parents moved here from Tunisia. “For me, it doesn’t matter who is Christian, who is Muslim, who is coming from Mars. They’re all human beings. I wanted to offer them a smile and bit of happiness after their terrible travels.”

Busloads of refugees began arriving from Munich last week in Cergy-Pontoise and several other French towns, after the leftist government announced it would help out an overwhelmed Germany.

France has agreed to take in more than 24,000 of the 160,000 asylum seekers the European Union’s executive arm wants to resettle across the 28-member block.

But the quota proposal is deeply divisive. At issue are battling visions of Europe — shaped not only by disagreements over how wide its doors should open to newcomers, but also which ones it should let in.

In Slovakia, politicians have announced they want only Christian refugees and Cyprus says it would prefer them. In Hungary, the prime minister rejected admitting Muslim refugees, saying he wanted “to keep Europe Christian.”

Even in Germany, where chocolate, toys and cheers have greeted the thousands of new arrivals, hundreds of Iranians and Afghans have reportedly converted to Christianity, apparently in an effort to improve their asylum chances.

In France, where taking in more refugees is proving a flashpoint ahead of 2017 presidential elections, two center-right mayors have sparked controversy by saying they too would only accept “persecuted” Christians. One, Yves Nicolin of Roanne, said he feared “terrorists in disguise” among the Muslims, adding emails flooding in from French residents support his views.

Still, a new poll shows French public opinion, for now, has tilted in favor of welcoming more asylum seekers. In Cergy-Pontoise, droves of residents are arriving with armfuls of clothes, toys and other supplies for about 115 Syrians and Iraqis who are staying at a recreation center near a lake.

“What we see dominating here is a warm welcome,” said Jean-Luc Mouly, president of Secours Catholique, which is part of Caritas France, a collection of Catholic relief organizations. “We’re seeing people who are coming in tired after having spent several difficult weeks. But many are happy to be in France, to be welcomed, to have liberty.”

There is 20-year-old law student Omar Abdulmunam who sat with two friends at a picnic table, playing rap music on his mobile phone. He fled his home in the heavily bombarded Damascus suburb of Douma less than a month ago.

“Because of the war, I saw a child die and blood everywhere and destruction everywhere,” said Abdulmunam, speaking in broken English. “I escaped from Douma to Damascus. From Damascus to Lebanon, Turkey, Greece, Macedonia, Serbia, Hungary, Germany. And here.”

Several people described perilous journeys across the Mediterranean to Greece. They said they escaped police in Hungary, where the treatment of refugees has drawn sharp criticism by human rights groups.

“They insulted people and kicked them and hit them with electric prods,” said Leila Karaa from Iraq, who said she and her family hid out in a Hungarian field for three days, before crossing the border to Austria.

“In France, people have shown us great humanity, great mercy and hospitality,” she added, speaking through a translator. “A French woman gave us a hug when we arrived.”

French religious leaders are urging their faithful to support the asylum seekers. Some say their phones have been saturated since Pope Francis’ appeal for communities to shelter refugees.

“There’s been a huge number of calls from parishioners who say they’re willing to volunteer their time or open up their homes,” said Mouly of Secours Catholique, describing the local response. 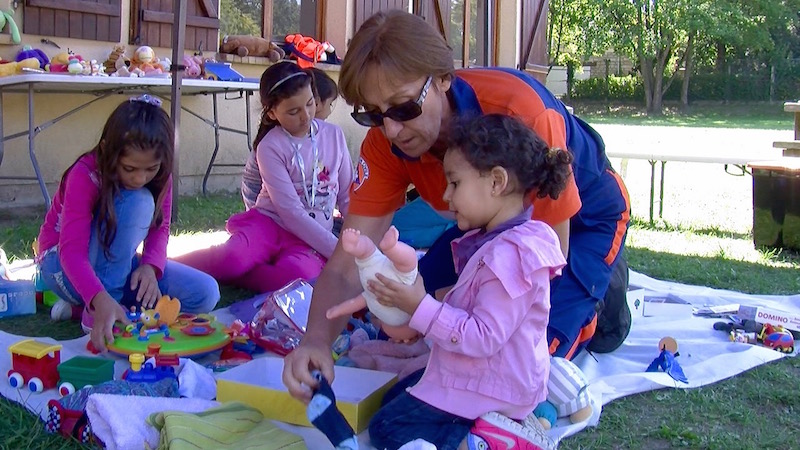 Offers of support have also increased at France’s Protestant Federation, which has a program to help Syrians and Iraqis apply for asylum and bring them to France safely.

France’s Muslim Council is calling on mosques to mobilize their communities.

“We can’t remain spectators in the face of a human drama,” said Secretary General Abdallah Zekri, who has been on the phone with mosque officials to step up the response. “We can’t wait long. These people need help rapidly.”

But there are indications the good will may be fleeting. Center and far-right opposition leaders have slammed Europe’s open-door system and proposed refugee quotas.

“If we’re not careful, the risk of disintegration of French society will grow and become inevitable,” former conservative president Nicolas Sarkozy told the Figaro newspaper. Sarkozy, who is eyeing another run, wants to issue only temporary refugee status until the conflict ends.

Meanwhile, at the Cergy-Pontoise recreation center, refugees sifted through piles of donated clothes and shoes, while volunteer Beatrice Nancey, played with a Syrian toddler.

“When we see these families and what they’ve been through,” she said, “we have to welcome them.”

News
Rohingya American voters ‘grateful,’ ‘excited’ to cast ballots for the first time in Chicago
News
Petition for a new American Girl doll asks popular toy company to tell the modern refugee story
News
French police operations underway after beheading of teacher
News
Refugee data on religion disappears as fewer persecuted Christians admitted to US
News
Faith-based organizations express outrage over plan to cut refugee admissions to historic low — again
© Copyright 2020, Religion News Service. All rights reserved. Use of and/or registration on any portion of this site constitutes acceptance of our User Agreement and Privacy Policy, Privacy Statement and Cookie Notice. The material on this site may not be reproduced, distributed, transmitted, cached or otherwise used, except with the prior written permission of Religion News Service.