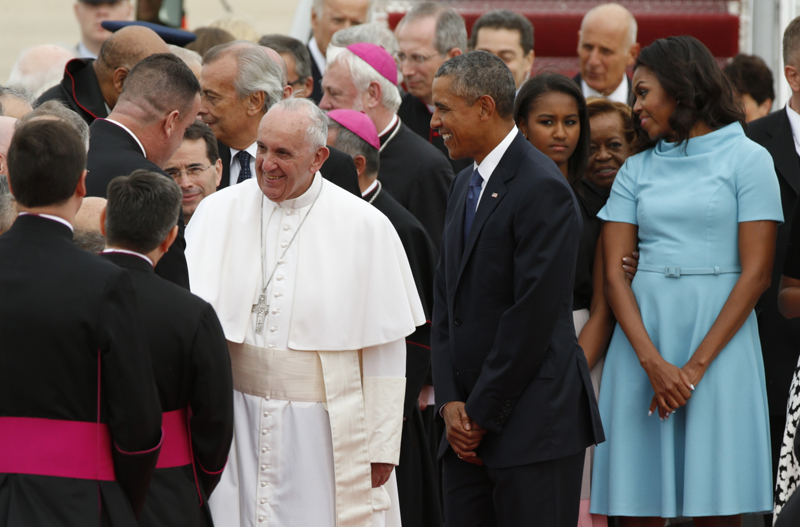 U.S. President Barack Obama welcomes Pope Francis to the United States as the pontiff shakes hands with dignitaries upon his arrival at Joint Base Andrews outside Washington on Sept. 22, 2015. REUTERS/Kevin Lamarque
*Editors: This photo may only be republished with RNS-POPE-ARRIVAL, originally transmitted on Sept. 22, 2015.

WASHINGTON (RNS) Pope Francis touched down in Washington on Tuesday afternoon (Sept. 22) after a historic visit to Cuba, the first Latin American pope in history on his first trip to the U.S. He comes “as a migrant,” as a top papal aide put it, on a six-day visit filled with great expectations for the popular pontiff but also numerous challenges.

Among them are the sharp, even personal criticisms directed at him from American conservatives upset with his thundering pronouncements against economic injustice and climate change, and from conservative Catholics upset that his focus on the poor and marginalized is undercutting the Catholic Church’s focus on battling abortion and gay marriage.

Francis himself addressed those concerns even before he landed, telling reporters aboard the chartered Alitalia jet that everything he has said is in keeping with church teaching and laughing at repeated accusations that he is a communist or radical left-winger:

“I am certain I have never said anything more than what is in the social doctrine of the church,” Francis said, according to Catholic News Service. “I follow the church and in this I do not think I am wrong.

“Maybe I have given an impression of being a little bit to the left,” the pope conceded. “But if they want me to recite the creed, I can!”

Click on this logo to see all of Religion News Service’s coverage of Pope Francis in the U.S.

People have all sorts of reasons to think “he’s communist or he’s not communist,” the pope said.

The pontiff’s remarks on the plane were the first indication of how he may handle the unprecedented expectations that became a central drama in the buildup to the trip.

Asked about whether he would call for the U.S. to end the economic embargo of Cuba when he speaks to a joint meeting of Congress on Thursday — a historic first — Francis indicated he would not and would leave that up to bilateral negotiations. 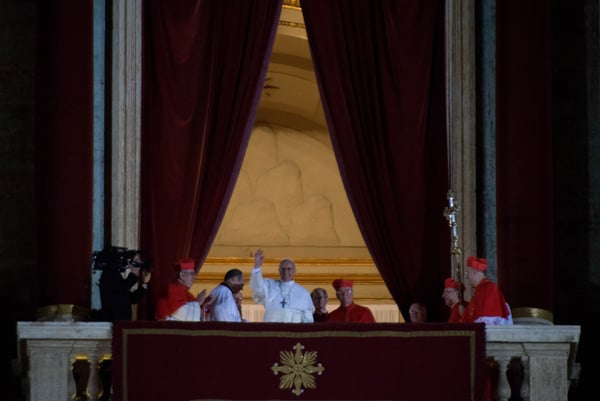 Francis played a key role in the diplomatic thaw between Washington and Havana; that was the main reason he visited Cuba first. Otherwise, he said, he would have entered the U.S. from Mexico to highlight the plight of immigrants — another hot-button topic he is expected to highlight.

But how and where he does that has been a matter of heated conjecture, with pundits and politicians trying to predict what he will say, or will not say, and what it will mean for their particular agenda.

“It’s not an easy path he has to walk,” said John Thavis, longtime Vatican bureau chief for Catholic News Service and author of a new book, “The Vatican Prophecies.”

“If he pulls his punches on some of these issues, people are going to say he backed off his powerful message,” Thavis said. “But he has to avoid sounding accusatory, or landing in the middle of partisan politics.”

The pope may need divine intervention to pull that off.

Everyone in Washington, New York and Philadelphia – the three cities he will visit over the next few days before departing for Rome on Sunday night – has sought to either hitch his or her wagon to the pope’s popularity, or use him as a foil to make an argument.

Notable, for example, was the fact that both President Obama and Vice President Joe Biden, with their wives, welcomed the pope at Joint Base Andrews (formerly known as Andrews Air Force Base), an honor never before accorded visiting world leaders.

But it was also not a complete surprise, given that Obama has found himself, unexpectedly, in sync with the head of the Catholic Church on a host of issues.

Meanwhile, House Speaker John Boehner, a lifelong Catholic, said he couldn’t wait for Francis to speak to a joint meeting of Congress on Thursday – a historic first that Boehner has spent decades trying to arrange. Yet one Arizona congressman, also a Republican and a Catholic, announced he was going to boycott the pontiff’s talk because he expected Francis to speak out against global warming.

Then there was Republican presidential hopeful Jeb Bush trying to straddle the line: Like many of his fellow Republicans, Bush has sharply rejected Francis’ teachings on economic justice and other matters. But Bush, a convert to Catholicism, also angled for a ticket to the papal Mass in Washington on Wednesday afternoon and will be in the crowd of some 25,000 (and an object of many photographers’ lenses).

READ:  Speaker John Boehner has tried to get pope to Capitol for 20 years

Democratic presidential nominee Bernie Sanders, on the other hand — a secular Jew and self-described socialist — loves to quote Francis’ blasts at economic injustice, though not so much the pope’s views on abortion and gay marriage. 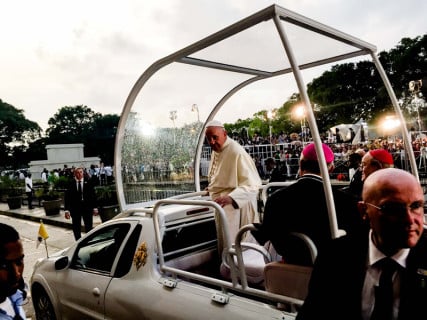 Pope Francis departs after addressing a gathering of young people at the Felix Varela in Havana. Photo by Gregory L. Tracy, courtesy of The Pilot/Archdiocese of Boston

It’s all great theater, and that’s all because in the two-and-a-half years since he was the surprise selection to succeed Pope Emeritus Benedict XVI, who resigned after a scandal-plagued eight-year reign, Francis has turned the Catholic Church upside down. Some have called it “a revolution of normalcy,” but it is one that has made people in and outside the church sit up and take notice.

The pope has shunned the grand trappings of the office, pledging to make the Catholic church “a poor church for the poor.” He has opened up debates on welcoming remarried and gay Catholics and has repeatedly condemned the church’s focus on “small-minded rules.” And he has called on Catholics — from cardinals to lay people — to leave the “fortress” mentality behind and get out in the street to accompany those in need. Pope Francis’ new encyclical, titled “Laudato Si (Be Praised), On the Care of Our Common Home,” is displayed during the presentation news conference at the Vatican on June 18, 2015. Photo courtesy of REUTERS/Max Rossi
*Editors: This photo may only be republished with RNS-ENCYCLICAL-FUTURE, originally transmitted on June 18, 2015, and with RNS-POPE-ARRIVE, originally transmitted on Sept. 22, 2015.

It’s a back-to-the-basics message that has resonated with America’s 68 million Catholics: Before Francis was elected, 53 percent said their church was out of touch with their needs, and 39 percent felt the opposite.

At the same time, Francis has broadened the church’s focus from issues of abortion and sexuality to highlight what he sees as the moral imperative to welcome immigrants, redress income inequality around the world and battle global warming as part of humanity’s duty to care for creation.

READ: 7 top issues Pope Francis has staked out for his papacy

He is forceful, outspoken and insistent on those topics, in ways that have gained him unexpected allies among progressives while alienating — at least in the U.S. — some of the church’s longtime friends among political and cultural conservatives.

None of those tensions was on display at the airport welcoming. Francis was smiling and looked relax as he greeted the Obamas — including the president’s daughters and his mother-in-law — and the Bidens.

The pope and Obama had a brief private chat; there were no speeches. And after greeting the children from Catholic schools and the several hundred other cheering onlookers, the 78-year-old Francis was whisked off to the Vatican Embassy to rest up for what is going to be a busy itinerary.

(Click on the graphic to read the pope’s itinerary.)