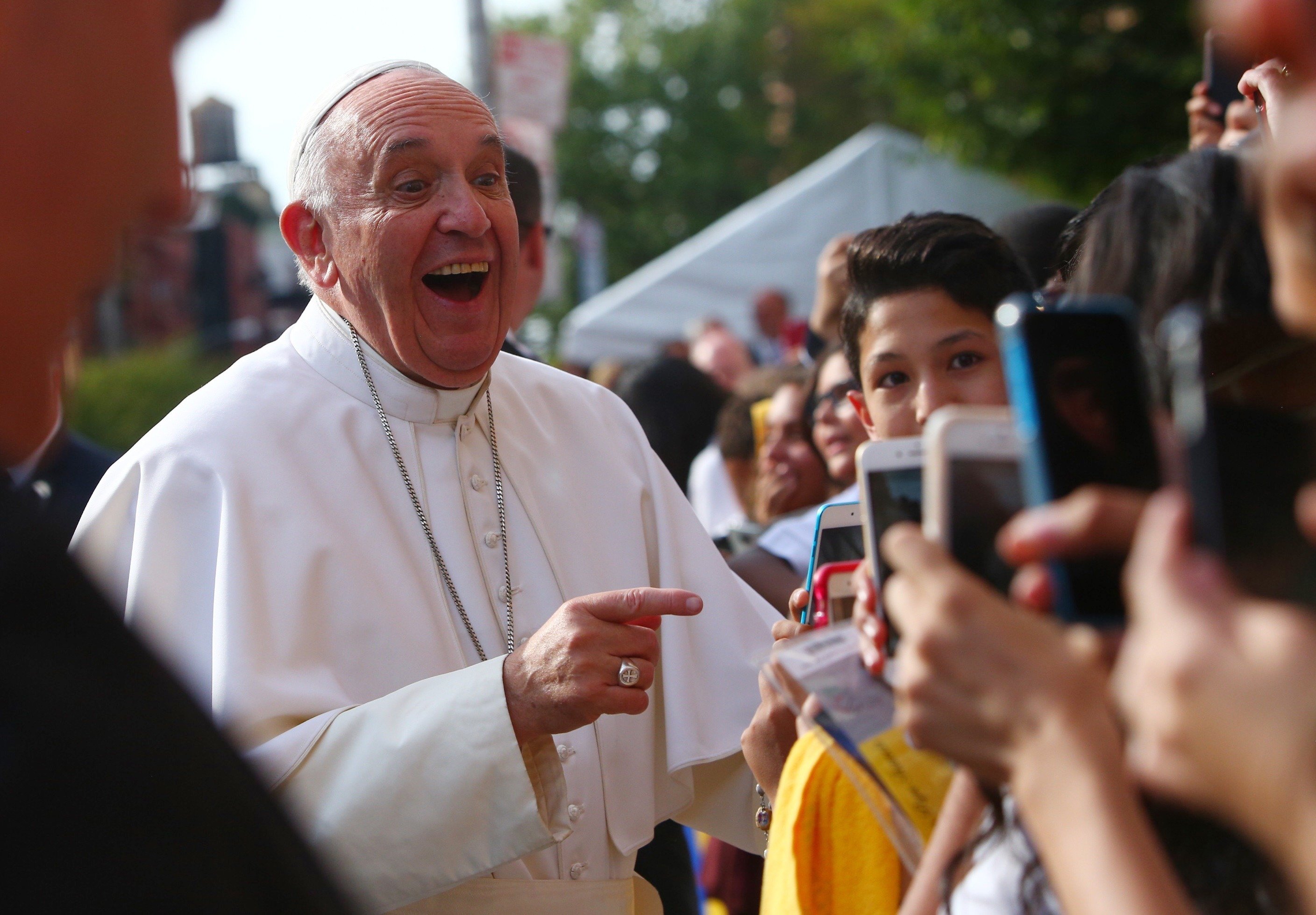 Pope Francis has had many powerful words for the governing elite of state and church so far on his historic papal visit.

What he does is his message. He embodies what he’s preaching:

Seek the prayers of the powerless on earth who have equal power in heaven. 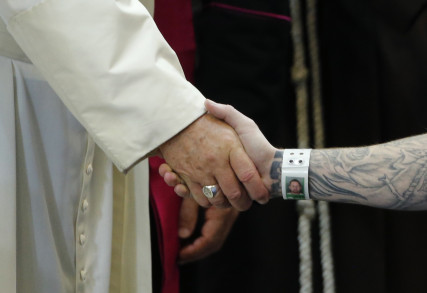 Pope Francis shakes hands with an inmate as he meets with prisoners at Curran-Fromhold Correctional Facility in Philadelphia, September 27, 2015. REUTERS/Jonathan Ernst (TPX IMAGES OF THE DAY)

We saw him embracing prison inmates in Philadelphia, saying he came as their brother.

We saw him as greeted hundreds of students from four New York City Catholic schools who gathered to welcome him at Our Lady Queen of Angels School in Harlem.

They’re mostly poor, mostly minority, many immigrants and children of immigrants. Many are the children of the margins where Pope Francis wants the powerful to pay attention. They were surrounded by NYC dignitaries and philanthropists and he shook all their hands, but the children were the ones for whom he radiated joy.

By bringing the spotlight to the schools, many struggling to keep tuition low and standards high, he honors the sacrifice parents make to give their children the Catholic education they value, said Archbishop of Louisville Joseph Kurtz, president of the U.S. Conference of Catholic Bishops.

Watch me touch and pay respect to every person, the pope said with his actions as he met with immigrants in New York City on Friday afternoon. Accept our gifts, they told him, offering everything from the humble gift to the grand. One man told Francis that the love of thousands flowing toward him was their gift to him.

“Economic and social exclusion is a complete denial of human fraternity and a grave offense against human rights and the environment,” the pope had told the United Nations, where he decried the spread of a “culture of waste.”

With his words, in the gym at Our Lady Queen of Angels, he spoke of school as a model of how we live together.

“Very near here is a very important street named after a man who did a lot for other people. I want to talk a little bit about him. He was the Reverend Martin Luther King. One day he said, “I have a dream.”

“His dream was that many children, many people could have equal opportunities. His dream was that many children like you could get an education. It is beautiful to have dreams and to be able to fight for them. Today we want to keep dreaming. We celebrate all the opportunities which enable you, and us adults, not to lose the hope of a better world with greater possibilities.”

He spoke of all gathered there who wanted the children to grow up to live in happiness, health and love. “Wherever there are dreams, there is joy, Jesus is always present,” he said, adding that the devil is the one who sows sadness, distrust and envy. But, he said, “Jesus is joy, and he wants to help us to feel that joy every day of our lives.”

Familiar words from this pope. But it was his ministry of presence that spoke most loudly.

Watch me, he said with his 78-year-old body, marching resolutely forward.

Someone asked me if he was the most charismatic pope I have covered. And I realized that with John Paul II, who was already infirm when I first saw him in St. Louis in 1999, and with retired Pope Benedict, who came to the USA in 2008, I don’t recall what they said.

Click on the logo for more Religion News Service coverage of the pope’s visit to the U.S.

But I do recall clearly the night that now-Saint John Paul met with youth in the St. Louis hockey stadium. He could scarcely walk. People held their breath whenever he approached a flight of steps.

The teens came to him with a gift, a hockey stick. He rose from his chair. He moved slowly to the lip of the stage. He took the stick and he gave it a little swing. Then he looked with his brilliantly blue eyes at the cameras that magnified his face on jumbo screens.

With his body, Pope John Paul II seemed to me to say, “I love you and I will use every ounce of strength I have to reach you.” The crowd roared.

When Pope Benedict XVI arrived, the shy scholar known for a strict adherence to doctrine was a surprise. He entered nearly every stage and spotlight with a smile on his face and his arms wide open.

With those open arms, Pope Benedict seemed to say, “The church is not only rules. It is heart. Here is mine.”

And on Friday, Pope Francis, arriving at Our Lady Queen Of Angels, touching every hand he could reach in lines five deep of squealing cell-phone- and rosary-toting young people, said all this.

Listening with a sincere smile to students explaining their projects in a classroom, cupping his ear to hear their singing, praying with them, he said all this.

With his body. With his smile.