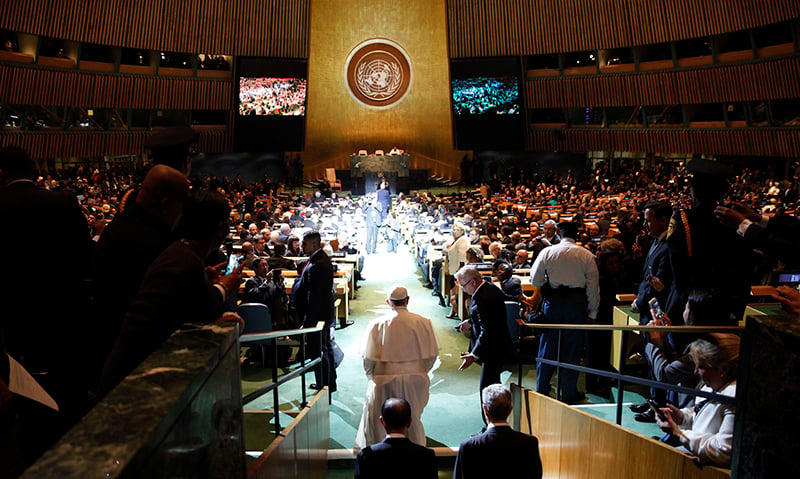 Pope Francis arrives for a plenary meeting of the United Nations Sustainable Development Summit 2015 at United Nations headquarters in Manhattan, New York, on September 25, 2015. More than 150 world leaders are expected to attend the summit from September 25-27 to formally adopt an ambitious new sustainable development agenda, a press statement by the U.N. stated. Photo courtesy of REUTERS/Mike Segar
*Editors: This photo may only be republished with RNS-POPE-UN, originally transmitted on Sept. 25, 2015.

NEW YORK (RNS) Pope Francis told world leaders gathered at the United Nations on Friday (Sept. 25) they must work to protect creation because “a true ‘right of the environment’ does exist” — a right he said was bound up with a moral duty to assure the basic needs of “the vast ranks of the excluded.”

The global environment and the world’s powerless, he added “are closely interconnected and made increasingly fragile by dominant political and economic relationships.

“That is why their rights must be forcefully affirmed, by working to protect the environment and by putting an end to exclusion.”

Throughout his address to the U.N.’s General Assembly, the pope repeatedly linked caring for the environment to caring for the poor, a central theme of his landmark document, the encyclical “Laudato Si’,” released in June to much controversy, that called for combating global warming and rebalancing the world’s economic priorities. 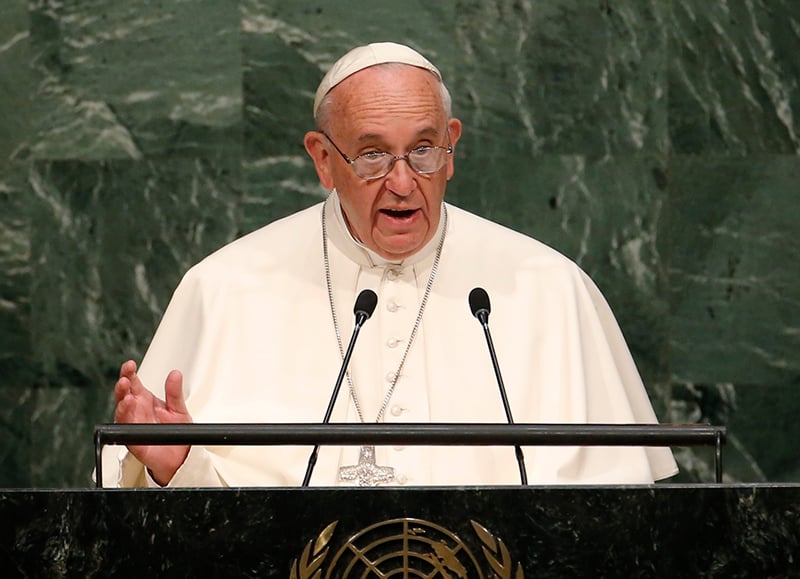 Pope Francis addresses a plenary meeting of the United Nations Sustainable Development Summit 2015 at United Nations headquarters in Manhattan, New York, on September 25, 2015. Photo courtesy of REUTERS/Mike Segar
*Editors: This photo may only be republished with RNS-POPE-UN, originally transmitted on Sept. 25, 2015.

Francis then went to the heart of the matter, detailing in unprecedented terms — and, for some theological conservatives, troubling language — how “this common home of all men and women must also be built on the understanding of a certain sacredness of created nature.”

A human being, the pope said, is both unique to the created world but “at the same time a part of these spheres.”

“He possesses a body shaped by physical, chemical and biological elements, and can only survive and develop if the ecological environment is favorable. Any harm done to the environment, therefore, is harm done to humanity,” the Argentine pontiff declared, speaking in his native Spanish.

“The misuse and destruction of the environment are also accompanied by a relentless process of exclusion,” he continued.

“In effect, a selfish and boundless thirst for power and material prosperity leads both to the misuse of available natural resources and to the exclusion of the weak and disadvantaged. … Economic and social exclusion is a complete denial of human fraternity and a grave offense against human rights and the environment,” he said, decrying the spread of a “culture of waste.”

Francis called for world leaders to secure for all people, and especially families, an “absolute minimum” of “lodging, labor, and land,” as well as “spiritual freedom, which includes religious freedom, the right to education and other civil rights.”

The speech was Francis’ most detailed discussion of his environmental encyclical, a priority he has stressed since the start of his six-day U.S. visit, his first to the U.S., which began in Washington and ends in Philadelphia this weekend after this stop in New York.

Many conservatives have been troubled both by the economic prescriptions in the encyclical — they reject Francis’ criticisms of capitalism and consumerism, or say the pope should not address such issues — while others fear that he is shading too close to a pagan view of nature.

READ: Hundreds shut out of sole session on gays at World Meeting of Families

The pope’s focus on the environment was widely expected: this General Assembly was convened to ratify a series of sustainable development goals that the Vatican strongly supports. Francis also wanted to highlight his environmental message to try to affect the next round of global climate change talks, set for Paris in December.

But Francis also used the occasion to link his teaching on the environment to Catholic doctrine on traditional marriage and the “absolute respect for life in all its stages and dimensions.” By that phrase he meant opposition to abortion and euthanasia, as well as defending the poor and battling human and drug trafficking, and economic injustice and warfare.

“Without the recognition of certain incontestable natural ethical limits and without the immediate implementation of those pillars of integral human development,” Francis said, the goal of social progress “risks becoming an unattainable illusion, or, even worse, idle chatter which serves as a cover for all kinds of abuse and corruption, or for carrying out an ideological colonization by the imposition of anomalous models and lifestyles which are alien to people’s identity and, in the end, irresponsible.”

The pope also used the address to reiterate his strong endorsement of the nuclear deal negotiated between leading Western powers and Iran, and to renew his call for “a world free of nuclear weapons.”

READ: What Pope Francis can teach the US Catholic Church about Thomas Merton (COMMENTARY)

And he blasted the persecution of Christians in the Middle East and some areas of Africa, and the destruction of religious sites — a clear reference to the Islamic State, or ISIS, and other extremist Muslim groups that have killed or enslaved Christians.

Throughout his address, and with urgency and passion rising in his voice, Francis insisted that the world body not waste time on empty rhetoric or theoretical debates, but instead focus on practical efforts to protect people:

“(R)eal human beings take precedence over partisan interests, however legitimate the latter may be,” the pontiff declared.

“In wars and conflicts there are individual persons, our brothers and sisters, men and women, young and old, boys and girls who weep, suffer and die. (They are) human beings who are easily discarded when our only response is to draw up lists of problems, strategies and disagreements.”

The assembly responded with lengthy applause and an extended standing ovation.