(RNS) The most significant feature of Pope Francis’ encyclical on environmentalism, “Laudato Si,'” is not about climate change. It is that the document represents a sea change in Catholic — indeed, Western religious — thinking on the relationship between human beings and the earth. 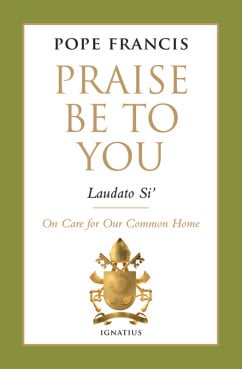 Naturally, mainstream media has focused on the political ramifications of the encyclical. And indeed, the document is significant for its unambiguous statement that “a very solid scientific consensus indicates that we are presently witnessing a disturbing warming of the climatic system” mostly due to human activity.

The pope also writes that “technology based on the use of highly polluting fossil fuels — especially coal, but also oil and, to a lesser degree, gas — needs to be progressively replaced without delay.”

But Francis’ analysis of environmental problems takes up only 28 out of the encyclical’s 184 pages. The overwhelming majority of “Laudato Si'” is, perhaps unsurprisingly, about theology. And while this material has been glossed over by the mainstream press, it is nothing less than a seismic shift in mainstream Christian thought about the human-nature relationship.

First, Francis reads scriptural passages in ways that, while not new, have thus far been confined to liberal theology.

In Chapter 2, he writes: “The creation accounts in the book of Genesis contain, in their own symbolic and narrative language, profound teachings about human existence and its historical reality. They suggest that human life is grounded in three fundamental and closely intertwined relationships: with God, with our neighbor and with the earth itself.”

This is not merely a statement that environmental issues are important. This is a radical theological claim, that human life is centrally defined by the human-earth relationship. How you relate to the earth is as important as how you relate to God.

When liberal religious environmentalists make such claims, they are accused of being “pagan.” But Francis is just getting started. In Chapter 3, he reads Genesis’ controversial injunction that humans should have “dominion” over the earth in precisely the terms of liberal religious environmentalism: “Our ‘dominion’ over the universe should be understood more properly in the sense of responsible stewardship.”

The language of stewardship is familiar to liberal theologians — but coming in a papal encyclical, it is stunning.

Indeed, it may be read as a response to a half-century-old argument, most famously made by the historian Lynn White, that the biblical relationship of “dominion” is partly to blame for the environmental crisis. Francis is giving a direct refutation of the anthropocentric view that the earth exists only as resources for humans to use.

“The Bible has no place for a tyrannical anthropocentrism unconcerned for other creatures,” he says.

Now, it should be noted that the qualifier “tyrannical” still leaves the door open, and similar qualifiers occur elsewhere: “modern anthropocentrism,” “excessive anthropocentrism” and “misguided anthropocentrism” are mentioned. “Laudato Si'” thus does not squarely overturn one thousand years of natural law, which places the human being on a higher moral level than the rest of the natural world.

Nonetheless, whatever anthropocentrism “Laudato Si'” leaves in place is so heavily restricted as to barely qualify. One passage is worth quoting at length:

“Although it is true that we Christians have at times incorrectly interpreted the Scriptures, nowadays we must forcefully reject the notion that our being created in God’s image and given dominion over the earth justifies absolute domination over other creatures. The biblical texts are to be read in their context, with an appropriate hermeneutic, recognizing that they tell us to ’till and keep’ the garden of the world (cf. Gen 2:15). ‘Tilling’ refers to cultivating, ploughing or working, while ‘keeping’ means caring, protecting, overseeing and preserving. This implies a relationship of mutual responsibility between human beings and nature.”

Here, Francis explicitly states that exploitative readings of Genesis have “incorrectly interpreted” it. Nature is not purely an instrumental good; rather, humans are in a “relationship of mutual responsibility” with it.

What this means is spelled out in the following chapters.

Francis devotes almost half the encyclical to a radical critique of the “dominant technocratic paradigm” and to proposing an “integral ecology” that brings together human, social, cultural, environmental, and economic concerns. Once again, such language would not be surprising coming from a student at a progressive Protestant seminary — but from the bishop of Rome it is indeed surprising.

Finally, Pope Francis’ overall spiritual attitude toward nature is perhaps the most radical part of the whole encyclical. He begins with his namesake, St. Francis of Assisi, who found spiritual communion not only in cathedrals but also in forests.

And in the end, he comes back to mysticism again, writing:

“The universe unfolds in God, who fills it completely. Hence, there is a mystical meaning to be found in a leaf, in a mountain trail, in a dewdrop, in a poor person’s face. The ideal is not only to pass from the exterior to the interior to discover the action of God in the soul, but also to discover God in all things.”

Mystical nature panentheism in a papal encyclical! And with a nod to liberation theology! And with a footnote to the Sufi mystic Ali al-Khawas, no less.

Whatever impact “Laudato Si'” has in the political world remains to be seen. But that the pope is here embracing a nature-based mysticism, a highly adumbrated anthropocentrism, and a radical “integral ecology” places the encyclical alongside the best of radical, progressive religious environmentalism — and far outside what even mainline Protestant denominations have affirmed heretofore.

“Laudato Si'” may turn out to be politically influential. It is already theologically revolutionary.

(Jay Michaelson is a columnist for The Daily Beast who has taught environmental ethics at Boston University Law School and other institutions.)