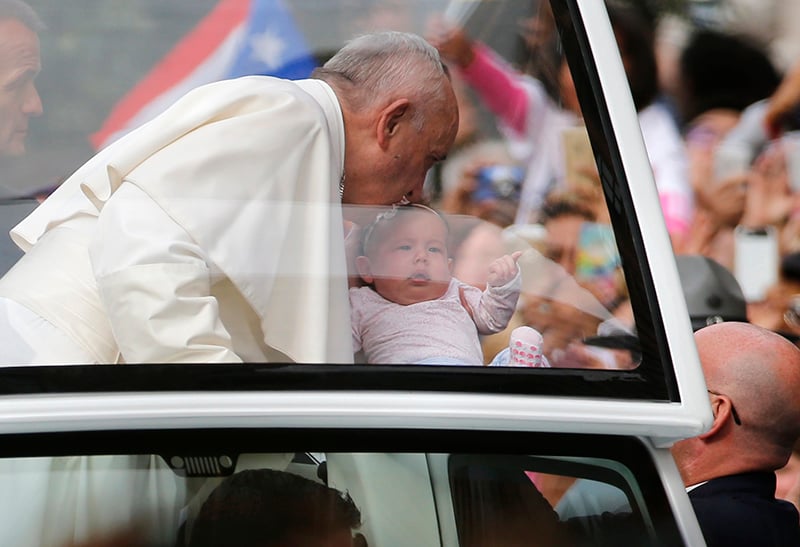 qPope Francis bends over to kiss a small child as he arrives at Independence Mall where he was to deliver remarks on the theme "We Hold These Truths," a quote from the U.S. Declaration of Independence, in front of Independence Hall in Philadelphia, on September 26 2015. Photo courtesy of REUTERS/Jim Bourg *Editors: This photo may only be republished with RNS-POPE-FAMILIES, originally transmitted on Sept. 26, 2015.
September 26, 2015
David Gibson

Pope Francis bends over to kiss a small child as he arrives at Independence Mall where he was to deliver remarks on the theme "We Hold These Truths," a quote from the U.S. Declaration of Independence, in front of Independence Hall in Philadelphia on Sept. 26 2015. Photo courtesy of REUTERS/Jim Bourg
*Editors: This photo may only be republished with RNS-POPE-FAMILIES, originally transmitted on Sept. 26, 2015.

PHILADELPHIA (RNS) A re-energized Pope Francis delighted tens of thousands of people crowded onto a thoroughfare in the city center on Saturday (Sept. 26), delivering a folksy, off-the-cuff riff on family life that came late in the evening, and at the end of a long day of speeches and festivities that by any measure should have left the 78-year-old pontiff drained.

But after watching more than 90 minutes of musical performances and moving testimonies from couples drawn from around the world, Francis stood up about 9:30 p.m. and set aside his prepared script, which focused on the economic hardships that undermine families.

Instead, he delivered a moving, profound -- and pretty funny -- tribute to the joys of marriage and parenthood.

“Some of you might say, of course, 'Father, you speak like that because you’re not married!'” Francis said with a laugh, anticipating objections to a celibate Catholic priest preaching to an audience of families -- all of whom laughed loudly, and of course protested not at all.

“Families have difficulties,” the Argentine pope continued, speaking in Spanish that was simultaneously translated by an aide. “In families, we quarrel. Sometimes plates can fly. Children bring headaches.”

And, he added, playfully, “I won’t speak about mother-in-laws.”

But, he said, “the most beautiful thing God made, says the Bible, was the family.”

God created the family, he said, and God was born into a family when Jesus was born to Mary.

“I ask them, ‘Did you sleep?’ They say, 'I couldn’t sleep, Your Holiness, because the baby didn’t sleep all night.’

“But those difficulties are overcome with love. Hatred is not capable of doing away with difficulties. A division of hearts cannot overcome difficulty. Only love is able to overcome. Love is about celebration. Love is joy. Love is moving forward.”

Then he asked an aide the time of his closing Mass on Sunday, and after learning it would be at 4 p.m., he bid his audience goodbye until tomorrow.

The crowd cheered wildly, and the long day was over.

The impromptu talk was the first time during this highly orchestrated visit, with its air-tight security and long lines, that Francis was able to do what he likes best -- speak straight from his heart, and straight to the people.

The spontaneous talk, however, also reflected his prepared speech, which highlighted the challenges families face as they try to do their best, even when they falter.

"Perfect families do not exist," Francis said in the address, which the Vatican said should be considered part of the official record of his trip.

In that prepared talk, as he has done in almost every speech this week, Francis sounded more poetic than dogmatic.

Difficulties “must not discourage us. Quite the opposite. Love is something we learn; love is something we live; love grows as it is ‘forged’ by the concrete situations which each particular family experiences. … This is a great legacy that we can give to our children, a very good lesson: We make mistakes, yes; we have problems, yes. But we know that that is not really what counts. We know that mistakes, problems and conflicts are an opportunity to draw closer to others, to draw closer to God.”

Yet in this address, Francis also conspicuously avoided the culture war rhetoric often associated with Catholic leaders and instead stressed the economic challenges that hurt families.

“I think of all those parents, all those families who lack employment or workers’ rights, and how this is a true cross,” Francis said in the prepared text.

“How many sacrifices they make to earn their daily bread! It is understandable that, when these parents return home, they are so weary that they cannot give their best to their children,” he said, citing a litany of ways that American society fails families.

Notably missing was any condemnation of gay marriage or an exaltation of the ideal nuclear family headed by a mother and father. Nor did the pontiff bemoan the growth of divorce or cohabitation or point to rampant secularization or slackening sexual mores as the reasons that traditional family life is facing difficulties.

Rather, Francis -- whose visit was timed to mark the conclusion of the church’s World Meeting of Families, held every three years in a different country -- lamented that so many families “lack housing or live in overcrowded conditions” and “lack access to basic health services” or are forced “to make great sacrifices to receive adequate treatment.”

“We cannot call any society healthy when it does not leave real room for family life. We cannot think that a society has a future when it fails to pass laws capable of protecting families and ensuring their basic needs, especially those of families just starting out,” the pope said in his prepared remarks.

“How many problems would be solved if our societies protected families and provided households, especially those of recently married couples, with the possibility of dignified work, housing and healthcare services to accompany them throughout life.”

The pope’s talk was unlikely to reassure social conservatives who have decried his unwillingness to follow their playbook, or ease concerns of economic conservatives upset at his sharp criticisms of the injustices fostered by modern capitalism.

Moreover, in an address earlier Saturday that focused on religious freedom, Francis had another opportunity to endorse the more combative elements of the American bishops’ agenda. But the pope also declined to follow the script.