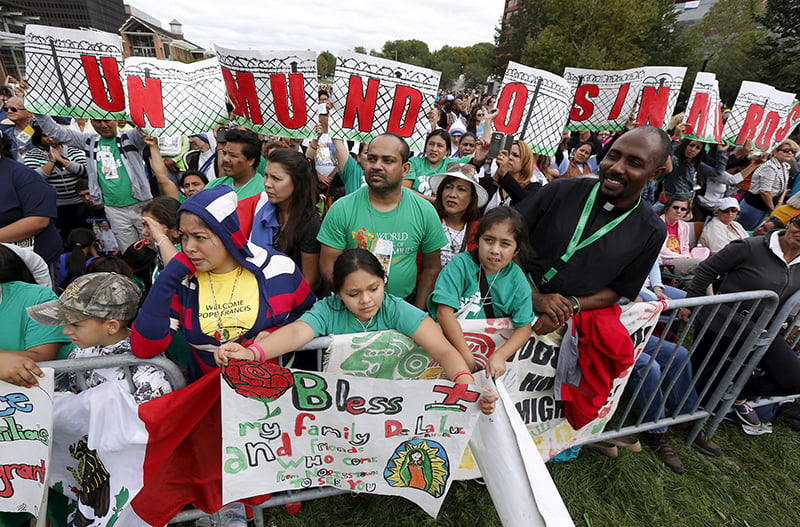 Hispanic immigration rights protestors hold up signs reading "Un Mundo Sin Muros" (A World Without Walls) as they wait for Pope Francis to arrive on Independence Mall in Philadelphia, Pennsylvania on September 26, 2015. Photo courtesy of REUTERS/Jim Bourg *Editors: This photo may only be republished with RNS-POPE-IMMIGRATION, originally transmitted on Sept. 26, 2015.
September 26, 2015
David Gibson

Hispanic immigration rights protesters hold up signs reading "Un Mundo Sin Muros" (A World Without Walls) as they wait for Pope Francis to arrive on Independence Mall in Philadelphia on Saturday (Sept. 26, 2015). Photo courtesy of REUTERS/Jim Bourg
*Editors: This photo may only be republished with RNS-POPE-IMMIGRATION, originally transmitted on Sept. 26, 2015.

PHILADELPHIA (RNS) Standing at a lectern once used by Abraham Lincoln and speaking to a crowd in front of Independence Hall, in the city that gave birth to the United States, Pope Francis on Saturday (Sept. 26) hailed the fundamental freedoms that have undergirded America’s greatest achievements.

But rather than using what could have been a clear opportunity to endorse the more combative elements of the American bishops' religious liberty agenda, Francis instead focused his remarks on how the nation’s freedoms foster pluralism and tolerance.

And he said that welcoming immigrants, especially Latinos like those who made up the bulk of his audience of some 50,000, was central to those principles.

“Many of you have immigrated to this country at great personal cost, but in the hope of building a new life,” Francis -- an Argentine native and the first Latin American pope in history -- said in Spanish.

“Do not be discouraged by whatever challenges and hardships you face,” the 78-year-old pontiff continued. Pope Francis speaks in front of Philadelphia's Independence Hall on Saturday (Sept. 26, 2015) on the theme "We Hold These Truths," a quote from the U.S. Declaration of Independence. Photo courtesy of REUTERS/Jim Bourg
*Editors: This photo may only be republished with RNS-POPE-IMMIGRATION, originally transmitted on Sept. 26, 2015.

“I ask you not to forget that, like those who came here before you, you bring many gifts to your new nation. You should never be ashamed of your traditions. Do not forget the lessons you learned from your elders, which are something you can bring to enrich the life of this American land. I repeat, do not be ashamed of what is part of you, your life blood.”

In addition, the pope -- famous for setting his prepared remarks aside to speak from the heart -- also went off script for the first time on this trip, growing animated and passionate as he hailed a globalization that respects and does not erase each community’s distinctive identity.

Those impromptu comments, and the obvious intensity he brought to the immigration issue, largely overshadowed the pope’s initial discussion of the legacy of America’s founding freedoms. 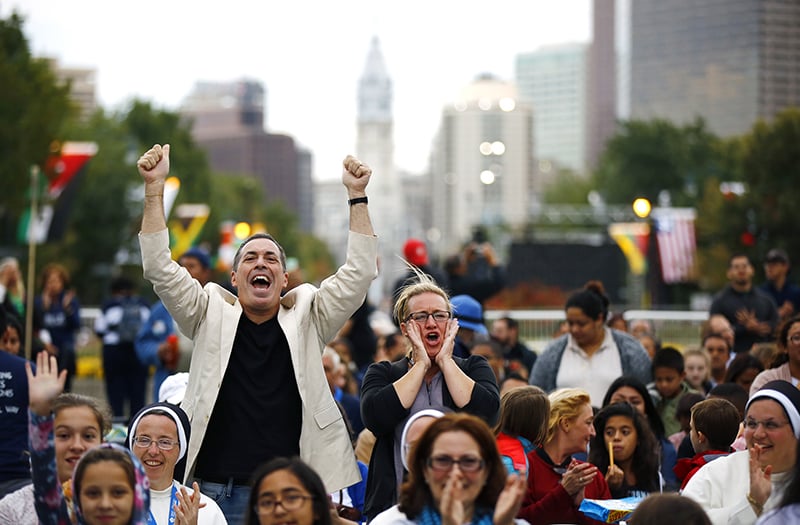 People cheer as they wait for Pope Francis in Philadelphia on Saturday (Sept. 26, 2015). Photo courtesy of REUTERS/POOL
*Editors: This photo may only be republished with RNS-POPE-IMMIGRATION, originally transmitted on Sept. 26, 2015.

The effort to live up to those “lofty principles,” he said, has been a constant struggle that has led “to the abolition of slavery, the extension of voting rights, the growth of the labor movement and the gradual effort to eliminate every kind of racism and prejudice directed at successive waves of new Americans.”

When the pope did highlight religious freedom, he held it out as a principle that advances society’s better angels by allowing faith to flourish. Believers of every kind, he said, have a duty to live up to the ideals of their own traditions, just as government must protect their freedom to do just that:

“In a world where various forms of modern tyranny seek to suppress religious freedom, or try to reduce it to a subculture without right to a voice in the public square, or to use religion as a pretext for hatred and brutality, it is imperative that the followers of the various religions join their voices in calling for peace, tolerance and respect for the dignity and rights of others,” the pope said.

Francis kept his remarks on religious freedom philosophical and historical, and he notably did not cite the U.S. bishops’ battles against gay rights or the Obama administration’s contraception mandate.

Both of those campaigns have been a prime focus of the hierarchy’s public policy efforts in recent years, and the religious freedom argument is central to each of them.

With just one more day before he flies back to Rome, the pope used his time defending immigrants and promoting social justice, eschewing cultural-warrior language and encouraging dialogue and engagement.