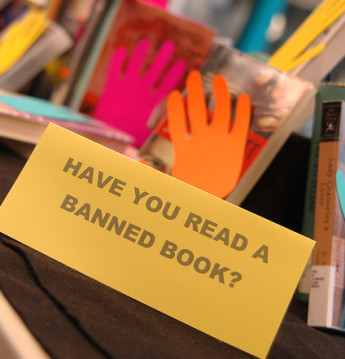 Not only is it International Blasphemy Rights Day (Sept. 30), we’re also midway through Banned Books Week.

For millennia, governments and societies have used legal and commercial means to censor ideas and expressions that challenge established beliefs. Banning “blasphemous” books shields deities, dogmas and political demigods from criticism and scrutiny. It quashes freedom of expression in order to maintain an illiberal peace.

Here’s a list of books that have been banned around the world for upsetting the status quo.

Yes, the Bible is full of violence and raunchy sex scenes, but that’s not why it’s been banned in many countries. Across Central Asia, publishing, importing and distributing religious literature is restricted to prevent “extremism.” In Malaysia, Malay-language Bibles are prohibited outside the confines of churches to protect “national security.” In North Korea, possessing a Bible is illegal because, well, pretty much everything is banned there. Governments often monitor and restrict communities of believers they fear might challenge their rule. They do so by cutting off access to holy scripture and outlawing proselytization, all while pretending to champion freedom of religion or belief in their constitutions. Don’t believe the propaganda. Do keep an eye on Bible balloons dropping the Word of God into hostile territories. 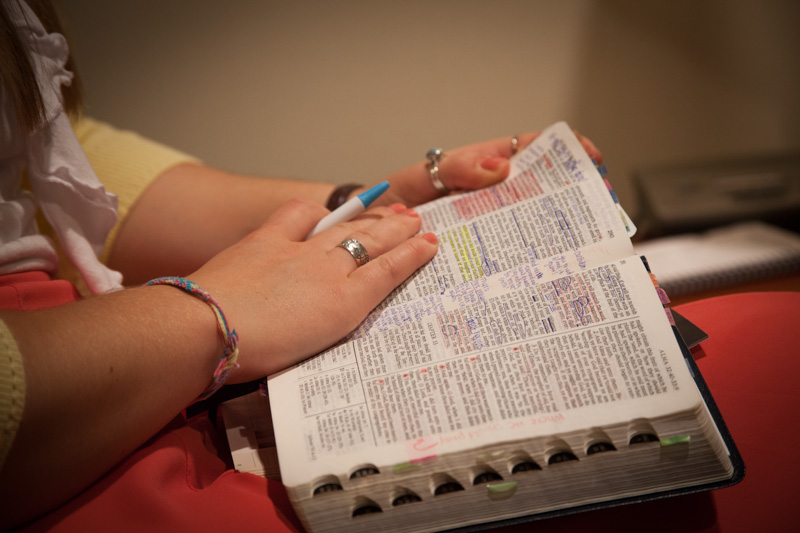 Sister Moody, from Elk Ridge, Utah, reads from her Bible during companionship study. Sister Moody is carrying out her mission at the Church of Jesus Christ of Latter-day Saints’ Independence Visitors’ Center in Missouri on Sept. 10, 2013. RNS photo by Sally Morrow

Lebanon banned the Dan Brown thriller in 2004, not for its lack of literary merit but because Catholic leaders took issue with its fictional assertion that (spoiler alert!) Jesus married Mary Magdalene and fathered her child. “Those things are difficult for us to accept, even if it’s supposed to be fiction,” Father Abdou Abu Kasm, then-president of Lebanon’s Catholic Information Centre, told the BBC after the book was pulled from shelves. “Christianity is not about forgiveness to the point of insulting Jesus Christ.” MARCH, a Lebanese civil rights group, lists “The Da Vinci Code,” “Anne Frank: The Diary of a Young Girl” and “Sophie’s Choice” among dozens of books that have been banned in Lebanon.

In 2002, the United Arab Emirates’ Ministry of Education and Youth went full Voldemort, banning the wizard from corrupting young minds on the grounds that J.K. Rowling’s tale ran “contrary to Islamic values.” In the same decision, 25 additional books were banned from use in private schools, including George Orwell’s “Animal Farm,” which features haram talking pigs in a cautionary tale against authoritarianism. 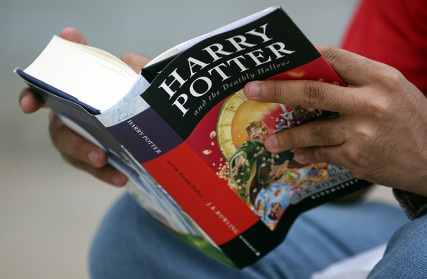 A fan reads “Harry Potter and the Deathly Hallows” by J.K. Rowling as he sits outside a bookstore in the western Indian city of Ahmedabad on July 21, 2007. Photo courtesy of REUTERS/Amit Dave
*Editors: This photo may only be republished with RNS-BLASPHEMOUS-BOOKS, originally transmitted on Sept. 30, 2015.

The Muslim holy book is banned and restricted in many of the same places and for many of the same reasons that limit the Bible’s reach. In 2013, the Russian city of Novorossiysk banned a specific translation of the Quran for allegedly promoting extremism and inciting violence, a move that placed the text on a nationwide blacklist. Offended Muslims should take some solace in Russia’s commitment to equal opportunity discrimination. Also banned are the works of Scientology founder L. Ron Hubbard; Turkish theologian Said Nursi; several Catholic, Jehovah’s Witness and Falun Gong publications; and a diverse range of other “extremist” religious texts. 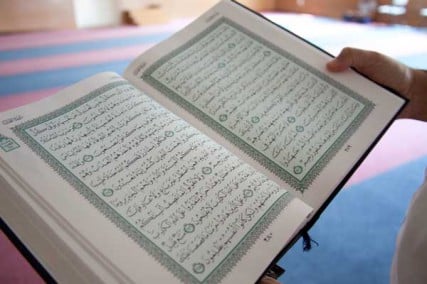 A Quran photographed in a mosque in 2012. Religion News Service photo by Sally Morrow

Where men are considered gods, governments and societies don’t take kindly to their “blasphemous” portrayals. This unauthorized biography of Thailand’s King Bhumibol Adulyadej was banned before it could be published there in 2006. Thailand’s increasingly strict “lèse majesté” laws shield the deified monarch from criticism and his government from accountability. A 2011 biography of Mahatma Gandhi was banned in Gujarat state for suggesting that he may have had a homosexual relationship, and a 1984 biography of Pakistan founder Muhammad Ali Jinnah was banned for claiming he ate pork and drank alcohol, both forbidden in Islam. That ban was later overturned.

Most novelists don’t make it to four books. Most fourth novels don’t ignite global outrage and inspire assassination attempts. Salman Rushdie accomplished both with “The Satanic Verses,” his 1988 novel partly inspired by the Prophet Muhammad. The “blasphemous” book was banned in India, burned in the U.K. and led Iran’s Ayatollah Khomeini to issue a fatwa calling for Rushdie’s death. Threats of violence surrounding the controversy still plague Rushdie. In 2012 he pulled out of a speaking gig at the Jaipur literature festival amid renewed calls for his assassination.

Ted Dawe’s 2012 novel won critical acclaim and several young-adult fiction awards in New Zealand, back when it was still available in bookstores. The country’s Film and Literature Board of Review placed an interim ban on “Into the River” earlier this month after the conservative Christian group Family First called for a permanent age restriction to be placed on the novel, citing its sexually explicit content. Selling or supplying the book remains illegal until the age classification issue is resolved, a stalemate that’s contributed to a spike in global interest — censorship backfiring at its best.

(Brian Pellot is a Cape Town-based contributing editor and columnist at Religion News Service; he writes a blog about freedom of expression and religious freedom.)