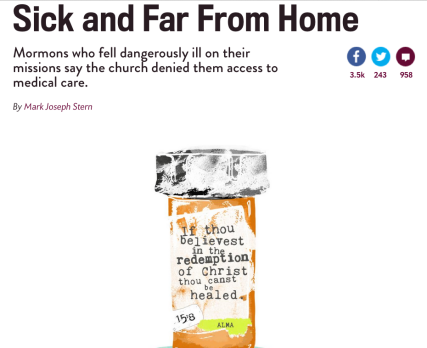 Yesterday I was disenchanted to discover a Slate piece so slanted it made me want to go do something radical. Like turn Republican. Or stop reading Slate, which I typically enjoy and learn from.

Yes, the article is that disappointing.

Mormon missionaries, it claims, are being routinely denied access to medical care if they get sick while on the mission field.

Since the Slate article is based entirely on anecdotal evidence with no hard statistics in sight, I figured, “Hey! This is now the standard of journalism.” So I called Jake Blackwelder, a young man in my ward who just returned from his mission to Malaysia, for some anecdotal evidence of my own.

While in Malaysia, Jake was hospitalized for dengue fever, and also came down with H1N1 and some kind of weird stomach infection.

Oh, and right at the end of his mission—just when his mom, who is a good friend of mine, was about to breathe a sigh of relief after all his medical ups and downs—Jake got hit by a car (!) and had to be hospitalized again, this time for a broken clavicle.

But that’s where the drama ends, because he had no trouble obtaining medical care, his mission president was fully supportive, and there was no stigma attached to his hospitalizations. Case closed.

“No one is chaining you to your desk,” he says about mission life. “It’s always your choice. If you need to go to the hospital, you can just go.”

Obviously, I found the Slate piece inadequate and one-sided. And if it were being billed as an op ed or a blog post, that would be par for the course. Instead, Slate pitched it yesterday as some kind of groundbreaking effort in investigative journalism. Here is the press release:

In a stunning investigatory story, Mark Joseph Stern unearths a horrifying and essentially unknown aspect of Mormon missionary culture — The LDS Church counsels strongly against active missionaries seeking medical help, and Mormon authority figures often go so far as to block access to health care and punish those who receive it. This has resulted in dozens of horror stories as outlined in Mark’s piece, irreparable physical and mental health damage among many, and, with 80,000 Mormon men and women currently serving on 418 different missions around the world, many of them in far flung, rural regions of developing countries, it means that a lot of people are currently in danger.

So according to the pitch, this story is “horrifying” (how could it not be, when based on “dozens of horror stories”?) because the LDS Church is “actively” blocking missionaries from obtaining needed medical care.

(I should add that those missionaries are all male. Although the fact that sister missionaries also exist is mentioned in passing, not a single one was quoted in the story.)

Slate maintains that the LDS Church “declined to comment at all” on this article and would not discuss its approach to providing health care for missionaries. 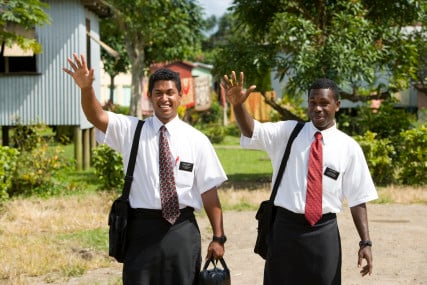 And that’s odd, since the Salt Lake Tribune did an interesting story on this two years ago and did get Church cooperation.

For example, the Trib learned that the percentage of early-return missionaries (ERMs) has stayed steady at around 1.5 percent, but the surge in the number of missionaries has led to proportionally more cases of early returns. To help their transition, the Church has put together “a team of doctors and psychologists” who follow their progress and offer counseling.

The Trib also reports on an academic psychological study of 348 ERMs that should have been of interest to the Slate reporter, but that evidence too is nowhere to be found.

The saddest thing is that if the Slate article had been well-researched and balanced, it might actually have done some good.

Even though its total reliance on one kind of personal story can’t pass for responsible journalism, that doesn’t mean the interviewees’ experiences aren’t true and important. They don’t represent the whole picture, but they deserve a wide hearing.

I recognize some truths buried in the sensationalized language of the Slate piece, including the idea that early-return missionaries can feel stigmatized in Mormon culture — especially if they have left the field for mental health reasons — and that gay missionaries are sometimes unfairly sent home. There has been a lot of pain.

Those are issues that Mormons should talk about—and are talking about (see here and here and here)—even though Slate insinuates that such conversations can occur only behind closed doors.

This piece had the opportunity to contribute to those (open and entirely Google-able) conversations. But because it wants to masquerade as a “stunning investigatory story” while making no effort to provide any other point of view, those opportunities are lost in hyperbole.

There are no counterexamples of missionaries like Jake who got sick while serving, obtained prompt medical care, and subsequently recovered on the field. That would not be a sufficiently “horrifying and essentially unknown” story, because those stories are boring. (Sorry, Jake.)

That hardly sounds like the Church is blocking access to medical care, even if a few fanatical mission presidents (or fellow missionaries) have stupidly done so. Those incidents are terrible and need to stop, but they are hardly the norm.

Slate can do better than this.