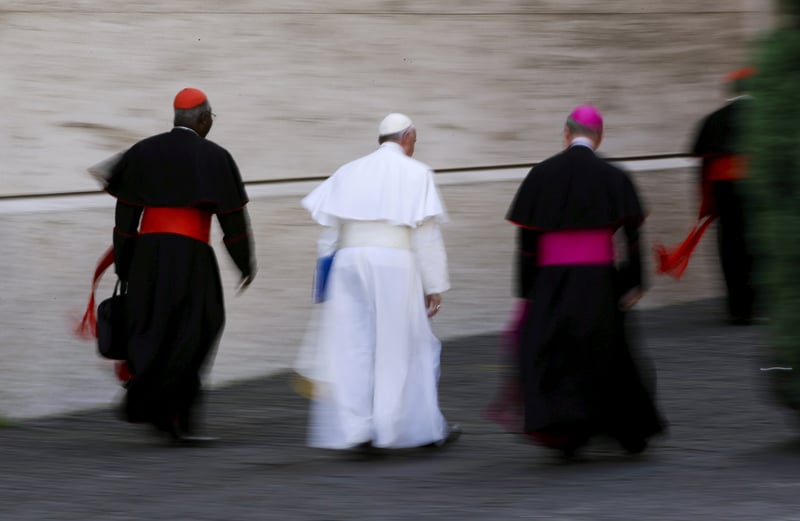 Pope Francis leaves at the end of the synod’s morning session on Thursday (Oct. 15, 2015). Photo courtesy of REUTERS/Max Rossi

VATICAN CITY (RNS) Ever since a Vatican summit last year raised the possibility of making the church more open to those whose family lives may not mirror the Catholic ideal, conservative foes have been in uproar, waging an intense campaign to block any reforms from being adopted.

Yet as a follow-up meeting this month has progressed, the enthusiasm of the traditionalists could be overwhelming their tactical judgment — annoying and even angering  enough of their fellow bishops they may have weakened what was once considered a strong position.

Still, the conservatives may also have created enough disarray and disagreement to ice any significant moves toward change, or taint any proposals they may offer to Pope Francis when the meeting, called a synod, concludes on Oct. 25 after three intense weeks.

The most public, and, for the conservatives, embarrassing episode came earlier this week with the leak of a private letter to the pope from 13 cardinals opposed to reforms.

In the letter, the senior churchmen complained that Francis had set up this meeting of 270 bishops from around the world in a way that would favor reformers who want, for example, to adopt a new approach to gays and lesbians or find a way that divorced and remarried Catholics could receive Communion.

Several cardinals quickly denied signing the letter, and others said the letter they signed was a bit different from the leaked version, though they did not say how.

That sent synod delegates and Vatican-watching media into a frenzy of speculation, until it was reported that there were in fact 13 signers, only some of them were different from those originally claimed.

Moreover, one of those newly revealed to have signed was Houston Cardinal Daniel DiNardo, a top official of the U.S. Conference of Catholic Bishops.

DiNardo’s participation in the secret campaign was seen as a knock at Washington Cardinal Donald Wuerl. That’s because Wuerl is a member of the committee named by Francis to draft the synod’s final report — a group whose composition had irked the conservatives.

New York Cardinal Timothy Dolan was also a signer, and after initially declining to comment, Dolan gave a radio interview, set for broadcast Saturday (Oct. 17), that offers a circuitous rationale for the letter. At the same time, Dolan pegs conservative Australian Cardinal George Pell — a top Vatican official and outspoken opponent of reforms — as the ringleader of the effort:

“Cardinal Pell in his good shrewd way said, ‘Am I correct in summing up some of the concerns?’” Dolan says in the interview. “And some of us, myself included, said, ‘Boy, that sounds good to me. If you have a letter to the pope, count me in.’ And, sure enough, I signed it.”

But, Dolan added, the letter was in Italian, and he said he “had forgotten about it” and was stunned when it emerged.

With all these twists and turns the saga was quickly becoming as absurd as it was convoluted, and it might have been seen as just another chapter in the legacy of Vatican intrigue that stretches from the era of the Borgia popes to the novels of Dan Brown — except that the plot seemed so backhanded it made the synod look faithless as well as foolish.

“The general opinion I detected among the bishops was a sense of disgust,” Bishop Marcello Semeraro, an Italian who is on the final drafting committee along with Wuerl, told Vatican Insider.

Another synod delegate, Archbishop Mark Coleridge of Australia, called the leaked letter affair a “typically Roman melodrama” that was “not untinged with psychodrama.”

The problem, Coleridge wrote on his blog, is that episodes like this tend to “aggravate the sense that the Synod is not much more than a political caucus, with ideological riptides swirling around us and the odd stinger drifting by.”

Already, he said, the deliberations are struggling to battle against “a fear that can become a kind of paranoia.”

“My reading of all this is that the ploy has backfired,” wrote veteran Vaticanista John Thavis. “I suspect most synod participants are not amused at this rather obvious attempt to pre-emptively discredit the synod’s outcome.”

The synod participant who counts most, of course, is Pope Francis, and he, too, was apparently not happy.

Pell had delivered the protest letter to Francis on Oct. 5, the first day of the synod meetings, and apparently made reference to it in comments on the synod floor.

The next morning, Francis made a brief, unscheduled speech in which he warned the bishops against buying into “the hermeneutic of conspiracy” — basically, conspiracy theories. Such fears, the pope said, are “sociologically weak and spiritually unhelpful.”

The pope’s rebuke, as well as details of the letter, only emerged days later.

But those aren’t the only examples of potential overreach by the right.

Shortly after the synod began, for example, the Polish bishops at the meeting — a solidly conservative bloc that has vocally opposed any suggestion of changes to church practices — began publishing on their website summaries of the speeches of individual participants along with each bishop’s name.

That was a clear violation of synod rules on privacy that Francis expressly wanted to allow the bishops to speak freely. The Polish bishops took down the postings after Vatican officials complained.

At the same time, nearly every day conservative churchmen or their allies are holding press conferences to denounce their opponents or their arguments in the strongest terms, or are delivering hard-line speeches in the synod hall that seem to provide little space for compromise.

And those moves follow a year of public lobbying against changes and regular charges that the reformers are manipulating or “rigging” the synod to achieve a desired outcome.

In lectures and interviews, in columns and blog posts, traditionalist churchmen and conservative Catholic pundits have also warned darkly of schisms and heresies if any changes are made, and leading cardinals, some from within Francis’ own Roman Curia, have written books blasting the reformers or rejecting proposals to lighten the off-putting language the church often uses to refer to gay people or cohabiting couples.

Ultimately, it’s unclear whether the irritation over the pressure tactics will lead enough delegates to try to move ahead without the hard-liners on board.

They probably don’t have enough support, or the desire, to go it alone. And as the synod enters its final and decisive week, there appears to be little consensus on reforms and no clear path to a resolution.

In the end, if the bishops cannot agree on opening pathways to change, as may well happen, then the status quo camp can claim victory. And if the reformers do manage to win some victories, then the prebuttal complaints by the right may serve to discredit any compromise — or leave a mess for Francis to sort out.