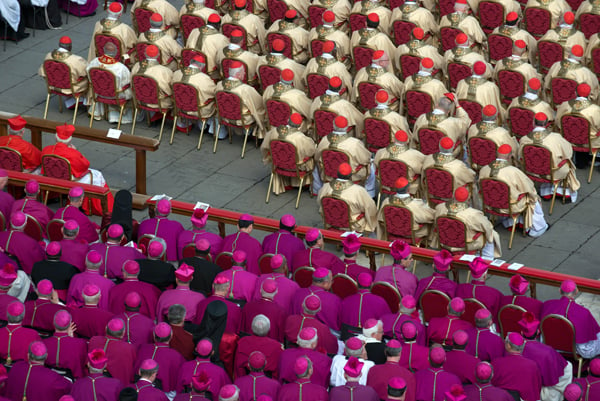 (RNS) When the cardinals gathered in the Sistine Chapel in March 2013 to elect a new pope, they faced a sobering state of affairs: The Vatican had been plagued by scandals and dysfunction during the eight-year papacy of Benedict XVI, who stunned the Catholic Church by becoming the first pope in six centuries to resign.

The sense of crisis in Rome hung like a pall on the rest of the church, and that burden weighed heavily on the 86-year-old pontiff, playing a key role in his decision to retire to make way for a younger, more energetic successor.

But the 113 cardinal-electors also faced a stark choice: select an outsider from among their ranks who would come in and clean house, or go with another insider, someone who knew the Roman Curia — the papal bureaucracy that was widely blamed for the crisis — and could fix it.

“It takes a thief to catch a thief,” the reasoning went.

The problem with that argument was that Benedict, previously known as Cardinal Joseph Ratzinger, had worked in the Curia for decades before he was elected pope, and his familiarity seemed to breed complacency.

It didn’t take the cardinals long to make up their minds: In 24 hours they elected Cardinal Jorge Mario Bergoglio of Argentina, a pope “from the ends of the earth” as Francis said in introducing himself to the world from the balcony of St. Peter’s Basilica. Bergoglio had never liked traveling to Rome on church business, much less playing church politics, and he had a healthy suspicion of the Vatican’s curial culture. 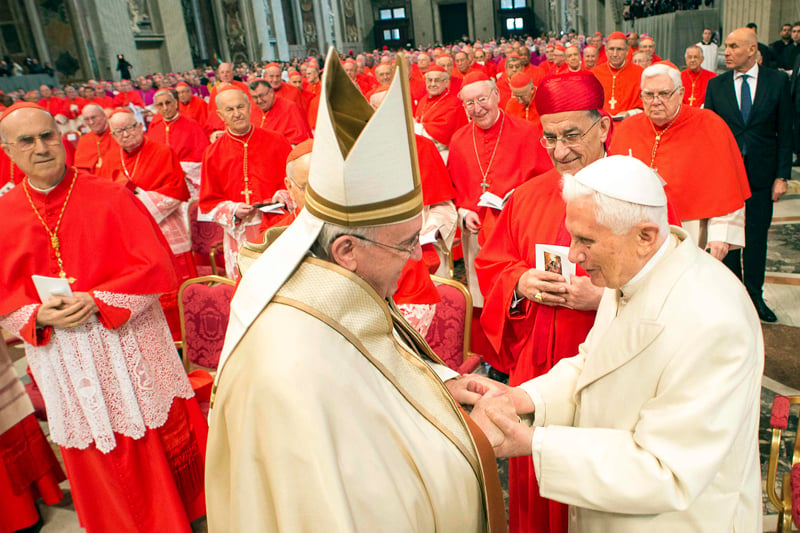 Pope Francis, left, greets Emeritus Pope Benedict XVI during a Mass to create 20 new cardinals during a ceremony in St. Peter’s Basilica at the Vatican on Feb. 14, 2015. RNS photo courtesy REUTERS/Osservatore Romano. *Editors: This photo can only be used with RNS-NEW-CARDINALS, transmitted Feb. 14, 2015, and with RNS-POPE-CURIA, originally published on Sept. 23, 2015.

So the cardinal-electors saw him as someone who could take curial reform in hand.

History showed it would be no easy task. The Roman Curia grew out of the papal court that had emerged over long centuries to serve the pontiff. Some of the offices took their shape from the bureaucracy of the imperial Roman state. In later centuries, as the papacy became more monarchical, the Curia tended to mimic the royal courts that served kings and queens across Europe. Indeed, the name “Curia” is taken from the Latin word meaning “court.”

As church expert Matthew Bunson notes, it was only in 1588 that Pope Sixtus V gave the Curia a formal organizational structure. “The skeleton of offices and departments he created has remained into modern times, with many popes introducing various changes and reforms,” Bunson wrote in Our Sunday Visitor. 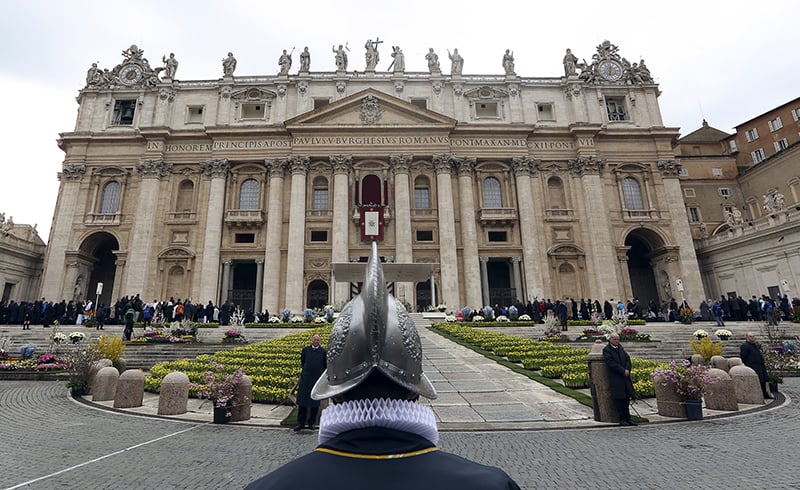 ‘How many people work in the Vatican?’

Each of the various offices is headed by a cardinal or bishop, and some reformers want to change that. Lay people in fact do most of the work, though how many employees there are, and how much they do, has often been a mystery and a source of consternation.

“How many people work in the Vatican,” reporters asked Pope John XXIII after his election in 1958.

“About half of them,” the quick-witted pontiff replied.

The actual answer, as Bunson writes, is that the Vatican has about 3,000 full-time employees: “Contrary to the media image of a vast and secretive Vatican bureaucracy, the staff working for the Holy See is surprisingly small.”

Until recently, the Roman Curia’s main department was the Secretariat of State, whose head acted much like a prime minister for the pope, effectively managing the Curia and overseeing Vatican diplomacy.

There are also nine departments, known as “congregations,” the oldest and traditionally most powerful of which is the Congregation for the Doctrine of the Faith, which was founded in 1542 as the Office of the Inquisition. The congregation’s mission remains the same: to safeguard doctrine and maintain orthodoxy.

Other congregations supervise the process of the canonization of saints, vet candidates for bishop appointments or oversee the liturgy, among other things.

Second in importance to the congregations are the 12 councils, which were created after the Second Vatican Council (1962-65) to deal with the changing needs of the church in the modern world. There are councils on the laity, the family and relations with other churches, for example.

There are three tribunals, or church courts, and more than two dozen commissions, academies, institutes and other offices.

The Vatican also has a media council, a press office, a daily newspaper, a radio station and a television operation — all of which operate independently and with little coordination. 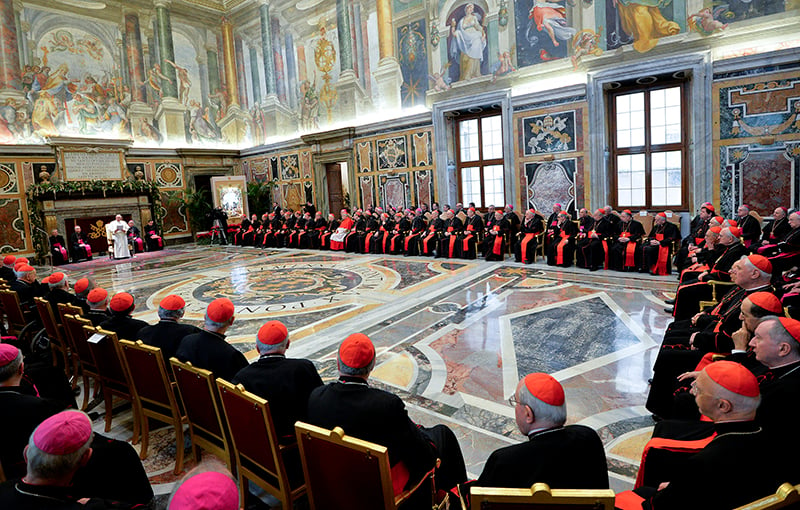 Pope Francis talks during an audience for Christmas greetings to the Curia in the Clementina hall at the Vatican on Dec. 22, 2014. Photo courtesy of REUTERS/Andreas Solaro/Pool *Editors: This photo may only be republished with RNS-POPE-CURIA, originally transmitted on Sept. 23, 2015.

‘A village of washerwomen’

Given the organic nature of the Curia’s evolution, and the palace court culture that incubated it, it is little wonder it has often been synonymous with inefficiency. Each office jealously guards its sovereignty, determined to answer only to the pope.

Hence each office will often duplicate the tasks of another and will sometimes have a different take on an issue.

That’s why anytime a media report states “the Vatican says,” it can be best to take what follows with a grain of salt. Figuring out which Vatican department is saying what keeps Vaticanologists — the Catholic counterpart to Kremlinologists — very busy.

This fief-like organization also breeds intense rivalries and, of course, regular scandals — from money to sex to regular leaks that at one point reached a WikiLeaks level called “Vatileaks.”

“A village of washerwomen,” as the late Archbishop Paul Marcinkus once called the Curia. Marcinkus knew; he was an influential American prelate who headed the Vatican bank in the 1980s and led it into one of its most lurid scandals.

There have been other attempts to reorganize the Curia, but many have resisted efforts to reform the papal bureaucracy; they know that popes come and go, but the Vatican civil service remains.

Knowing that, Francis first and foremost wants to change the culture, and he apparently thinks he will have to use a club as much as a scalpel.

In the annual papal Christmas address to the Curia last December, Francis launched a blistering critique of his own bureaucracy, cataloging 15 illnesses that plague the Vatican, from the “terrorism of gossip” to “spiritual Alzheimer’s.” He later made it clear his target was not the lay staff that performs most of the actual work of running the Holy See, but the clerics who are in authority.

That echoed his earlier warnings to his cardinals, who are his closest advisers, that they are “not a royal court” and must avoid “habits and ways of acting typical of a court: intrigue, gossip, cliques, favoritism and preferences.”

Many have taken that message to heart, and many more have always been good soldiers whose expertise and hard work have kept the church running smoothly. Then again, a small and powerful minority remains dead set against what Francis is saying.

The Vatican bureaucracy, he told the world’s cardinals earlier this year, must encourage “greater harmony” among the different offices in a bid to foster “absolute transparency that builds authentic … collegiality.”

For now, it’s not clear that structural changes will actually streamline the Curia or make it smaller.

Working with his cardinals, Francis is planning an overhaul, but the main proposal has been to combine various offices and place them under two major departments, one dealing with issues of justice and charity, the other with issues such as the family and the laity.

In one of his first significant efforts, Francis in 2014 added a Secretariat for the Economy to oversee the budgets of both the Curia’s offices and the Vatican City State. That was one of several lay-led departments added by Francis to try to clean up the murky finances of the Vatican and also the secret books of the Vatican bank — formally known as the Institute for Religious Works, which has been a regular source of scandals.

Francis also established a special commission — with mostly lay people and even victims — to address the clergy sex abuse scandal. Acting on their recommendation, he also established a new tribunal, or church court, to judge and discipline bishops who failed to act against molesters.

Then, in June of this year, Francis created a third secretariat, this time for media, consolidating nine offices under one chief and elevating the importance of the office to the level of the Secretariat of State and the office on economic affairs.

Another reform that has been bandied about is term limits for curial officials, mainly the priests, bishops and cardinals who work at the Vatican, ostensibly for five-year terms. In reality, those terms are often automatically renewed and clerics become lifers in the Curia.

The Rev. Thomas Reese, a Jesuit who has for years studied the administrative structures of the church, believes the most important change would be to bar any bishop or cardinal from heading a Vatican office. That would send a message that the Curia is at the service of the bishops around the world, not the other way around, as is often the case.

Changing the Curia by going around the Curia

Whatever organizational reforms or cultural transformations emerge, Francis has mainly changed the Curia by going around the Curia.

Almost immediately after his election he set up a kind of “kitchen cabinet” of eight cardinals from around the world, none of them from the Curia (he later added a ninth, Cardinal Pietro Parolin, the Secretary of State he appointed). He has used that Council of Cardinals as his chief advisers and mode of managing the church. He is also consulting with the larger, global body of nearly 200 cardinals on a regular basis, and he has revived the system of synods, or periodic meetings of bishops from around the world, to deliberate critical issues facing the church.

The net effect is to downsize the role and influence of the central bureaucracy and decentralize power in the Catholic Church.

Whether this will be effective, or will even outlast Francis, remains unclear.

“Four years of Bergoglio would be enough to change things,” one cardinal-elector told an Italian reporter shortly before the 2013 conclave that elected Francis.

The only way to tell is if Francis, who turns 79 in December, stays around for a couple more years — and if he can keep up the pressure to change Rome’s way of doing business.

Much is at stake. As Francis himself has said: “Reform is not an end in itself, but a means of bearing a powerful Christian witness.”