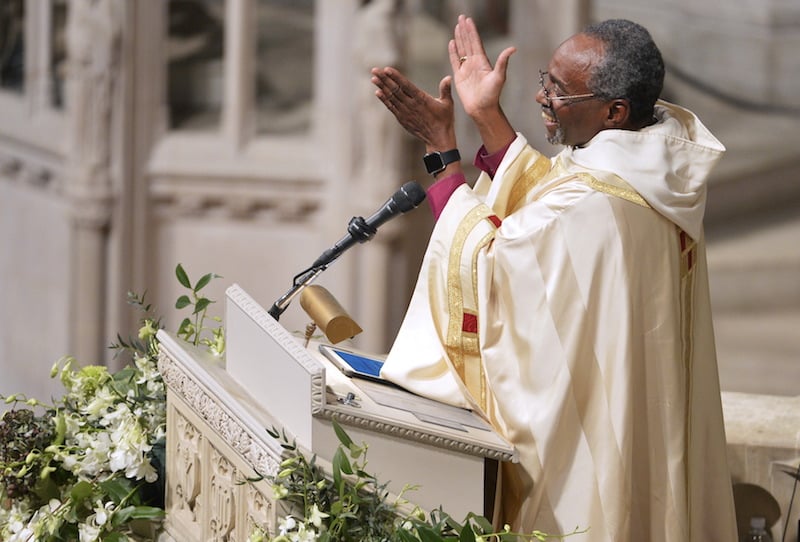 WASHINGTON (RNS) After knocking loudly three times on the door of the Washington National Cathedral, Bishop Michael Curry was installed as the new presiding bishop of the Episcopal Church Sunday (Nov. 1), the first African-American to lead the 2.5 million-member denomination.

Curry preached on how his father was moved to become an Episcopalian after watching a church welcome his then-fiancee to drink from the common Communion cup in the often-segregated 1940s.

“The Holy Spirit has done evangelism and racial reconciliation before in the Episcopal Church,” he told a congregation of almost 2,500. But he added: “God is not finished with this church. God has work for us to do. Jesus has shown us the way and we are the Jesus movement, so my brothers and sisters, walk together, children, don’t you get weary.”

MORE: Bishop Michael Curry’s vision: A world transformed by the love of God

The service of almost three hours encompassed the traditions of the church and the diversity Curry, 62, is encouraging it to embrace. He was elected during an unprecedented first ballot at the church’s General Convention this summer after serving 15 years as bishop of the Episcopal Diocese of North Carolina.

When church leaders, including his predecessor, Bishop Katharine Jefferts Schori, welcomed him into the door of the cathedral, Curry declared himself a “child of God, baptized in St. Simon of Cyrene Church,” the Maywood, Ill., congregation where his father served as a priest.

He then used boxwood fronds to sprinkle the worshippers with holy water to remind them of their baptism. Instrumentalists later played Aaron Copland’s “Fanfare for the Common Man.”

A dashiki-clad gospel choir from a Philadelphia Episcopal church sang its rocking rendition of Bill Gaither’s “He Touched Me.” Piscataway Indians drummed and chanted as 150 bishops processed into the cathedral and Scriptures were later read in Spanish and Lakota. Catholic, Jewish and Muslim faith leaders took turns offering prayers of blessing for Curry.

In his sermon, in which he quoted Charles Dickens, Bobby McFerrin (“Don’t worry, be happy”), and Jesus, Curry gave a new interpretation of the Good Samaritan story. He noted that a Muslim might be the one to care for a person in need.

“Or change it even more: A police officer was beaten and wounded and it was an African-American young man or a Latino young man or woman who brought healing,” he said. 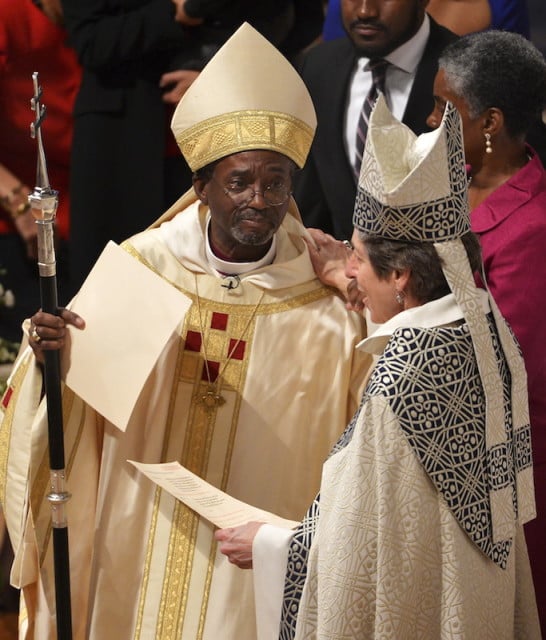 At the same convention where Curry was elected, the Episcopal Church voted to make marriage liturgies available to same-sex couples across the church while protecting the conscience of clergy who oppose such ceremonies.

A supporter of LGBT rights, Curry has said he nevertheless intends to keep his denomination open to those who may not share his perspective.

“I really do believe that when Jesus said ‘go make disciples of all nations,’ ‘all’ really meant all,” he told Religion News Service in a recent interview. “That means traditionalists and progressives.”

The Rev. Todd R. Dill, rector of St. Margaret’s Episcopal Church in Waxhaw, N.C., was among the theologically conservative Episcopalians who attested to Curry’s inclusive nature. Though he and Curry differ on the issue of marriage, he said they agree on feeding the hungry, caring for the marginalized and preaching the gospel.

“I believe that Bishop Curry’s fervor for the Lord has shaped his faith and his leadership and has uniquely positioned him as a unifying and reconciling voice during these deeply divided times,” said Dill. “He has done that in North Carolina and it is my prayer that he can help bring this sense of unity to our national church and our international communion.”

Members of the Union of Black Episcopalians, who have called Curry’s election their “Obama moment,” hosted a vigil Saturday at the D.C. Armory, allowing more people to celebrate his installation. That group also provided a live-stream of the installation on large screens at the same location as dozens of churches held viewing parties across the country.

“But in addition to that it was a rainbow of people from across our church — every culture, every ethnicity participated in the service,” she said. “It absolutely embodies what he stands for, which is the whole church being reconciled to Christ.”

Bishop Anne Hodges-Copple, suffragan bishop of the Diocese of North Carolina, said Curry’s focus on evangelism will bridge divides in the nationwide church.

“The Episcopal Church has never been cold but I think that Bishop Curry turns up the heat,” she said. “He takes the fear factor out of evangelism.”

Curry informed those gathered that the ceremony was less about him and more about them becoming part of what he calls the “Jesus movement.”

“That’s why we are here,” he told them. “That movement turns the world upside down.”