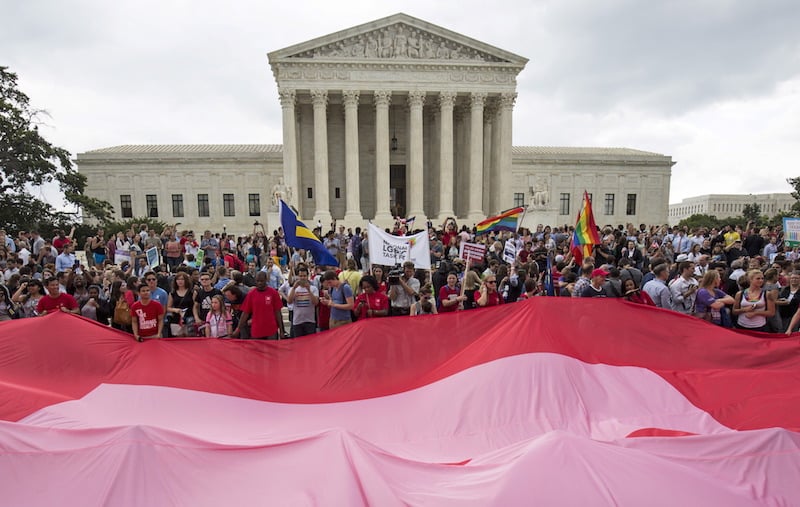 Supporters of gay marriage rally after the U.S. Supreme Court ruled on June 26, 2015, that the U.S. Constitution provides same-sex couples the right to marry. Photo courtesy of REUTERS/Joshua Roberts *Editors: This photo may only be republished with RNS-MOHLER-COLUMN, originally transmitted on Nov. 3, 2015.

(RNS) What explains the fact that the American people changed their minds so quickly on the question of same-sex marriage? A report from the Pew Research Center indicated that in 2001, Americans opposed same-sex marriage by an overwhelming margin, 57 percent to 35 percent. By 2015 those percentages had nearly reversed, with 55 percent supporting same-sex marriage and only 39 percent opposing it.

Same-sex marriage is now legal in all 50 states because of a decision of the U.S. Supreme Court, but that decision came after public opinion had shifted. This is the same shift in public opinion that explains why President Obama famously “evolved” on the issue during the 2012 presidential campaign.

But what explains the shift in public opinion? Hollywood played its part, for sure, sending a barrage of signals through entertainment. The academic and cultural elites did the same, using their influence in colleges and universities and shaping public opinion, especially among younger Americans. Major corporations, the legal system, liberal churches and even the Boy Scouts of America played parts in this moral revolution.

And yet, I wonder if something else explains at least a large part of this shift in public opinion: What if it isn’t real?

What if public opinion has not actually shifted nearly as much as is claimed?

I am not arguing that pollsters such as Pew stacked the deck or asked misleading questions. It does seem certain that a majority of Americans will tell a researcher that they support same-sex marriage, even if they believed the opposite just a few years before.

An interesting report recently appeared in The New York Times indicating that boys in disadvantaged families suffer even more than their sisters. According to the article, boys “react more negatively to disadvantage,” and this shows up in patterns that range from higher rates of misbehavior to lower rates of high school graduation and college admissions.

What caught my eye was that disadvantage was defined as “growing up in poverty, in a bad neighborhood or without a father.”

Without a father? To most Americans that is just common sense. Furthermore, a mountain of research and analysis backs it up. Boys do better, not only with two parents in the home, but specifically with a father in the home.

The courts legalizing same-sex marriage insisted that there was no real evidence that same-sex couples were in any way lacking in the ability to raise children, boys or girls. Two moms or two dads are just as good as a mom and a dad, the elites insisted.

Now a majority of Americans agree? I actually don’t believe so. At the very least, I don’t think they have thought through their position. They are generally saying what they have been told to say — even shamed into saying by Hollywood and the elites.

But if research consistently shows that boys need a dad in the home, we can’t turn around and say that two moms will do just as well.

The legalization of same-sex marriage was pushed by a vast array of cultural influencers and driven by the courts. Public opinion is now for same-sex marriage, and those pushing the moral revolution are ready to move on to their next goal.

But before the rest of the society moves on, we should ask if people really mean what they say when they insist that they fully support same-sex marriage.

There is evidence right in the pages of The New York Times that boys do need a dad. Boys “without a father” are disadvantaged by that absence.

This is the same newspaper that took every editorial opportunity to support same-sex marriage and to claim that the gender of a parent didn’t matter.

Do the editorial writers read their own news sections?

I do not doubt that a vast moral revolution is reshaping America, but it is doubtful that most Americans are ready to say that a boy doesn’t need a dad. And, unless they are willing to go that far, they really do not support same-sex marriage as is claimed — or even, as they claim.

(Albert Mohler Jr. is president of Southern Baptist Theological Seminary in Louisville, Ky., and author of  “We Cannot Be Silent: Speaking Truth to a Culture Redefining Sex, Marriage, and the Very Meaning of Right and Wrong.”)