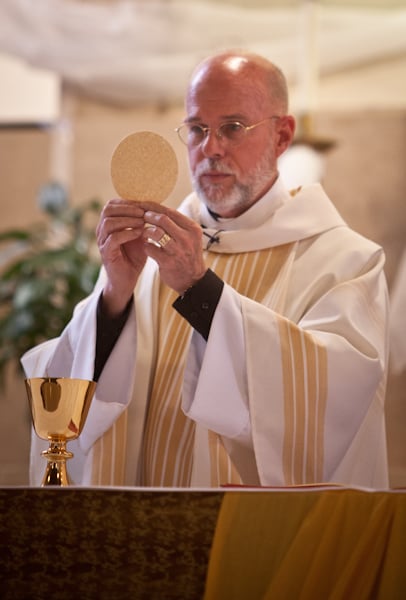 (RNS) As a Protestant who is divorced and remarried, I have watched the debate over Communion for civilly remarried Catholics with keen interest.

Since I can always find a church that will affirm my marriage and welcome me to the Lord’s Table, I am sympathetic to Catholics who, if remarried without an annulment, cannot receive the sacrament of Communion.

Naturally, I strongly reject the accusation that sexual intimacy with the love of my life and the mother of my children makes me a mortal sinner, no different than a man who sleeps with prostitutes every night. I am further perplexed by the Catholic Church’s demand that people like me must be celibate, living with their spouse “as brother and sister” if they ever hope to receive Communion worthily.

Today many Catholics, influenced by Orthodox and Protestant thinking, see no harm in remarried people receiving Communion. After all, Pope Francis himself says that the Eucharist “is not a prize for the perfect but a powerful medicine and nourishment for the weak.”

Yet my advice to Pope Francis is this: Don’t change Catholic teaching on marriage.

Protestantism’s experience with liberalizing on sex over the past 80 or 100 years has not helped the church very much. The churches’ standing is weaker than ever. Legal and cultural institutions normalized contraception, divorce, and even abortion, usually with Protestant support. Evangelicals are left to wonder whether they led or followed secular thinking. And liberal Protestants have almost nothing distinctive to say about sex or the family at all.

Catholics on both sides of the Communion-for-remarrieds debate should consider the experience of the Anglican Communion. Divorce and remarriage was, after all, the precipitating event that led King Henry VIII away from Rome. As one historian puts it, “Because the Catholic Church enforced this law, schism and subsequent heresy invaded one of her choicest realms when a pope refused to grant a divorce to a licentious English king.”

On some level, the very founding of the Church of England prefigures Protestants’ various departures from historic Christian teaching on marriage and sexuality. Anglicans sustained catholicity for a time, but controversies over sexual ethics have engulfed the Anglican Communion.

READ: The Bible ties freedom to debt relief. Americans should too (COMMENTARY)

Consider contraception. As late as 1920, the Lambeth Conference, a periodic gathering of Anglican prelates, resolutely denounced contraception. At Lambeth in 1930, it all changed. Rather than admonishing its parishioners who were already using artificial birth control, the church dropped its opposition and ceded the question to conscience. Yet the attitude of lay Anglicans toward the church presaged much of what has unfolded over the decades since: No priest is going to tell me what I can do in my bedroom or doctor’s office.

Today, the Anglican Communion’s unity is in grave peril. Ostensibly united by the Book of Common Prayer, sexually liberalized churches in the West barely coexist with traditionalist churches in the Global South. The conservative Anglican Church of North America is a competing denomination to the Episcopal Church in the United States. Some Episcopal parishes have aligned under the oversight of other bishops in the Anglican Communion, often in Africa.

Historically, Protestant bodies have split along geographical or theological lines. Today, intractable disagreements threaten some denominations with schism and force realignments in many others.

The Catholic Church should strive to avoid these difficulties. One proposal is that bishops in liberal dioceses could allow a “penitential path” for remarried Catholics to receive Communion. But localizing the issue is not a good solution.

The Archbishop of Canterbury, who heads the worldwide Anglican Communion, faces constant challenges in leading provinces with such widely divergent beliefs and practices concerning marriage, divorce, gender roles, and sexuality.

Though Catholic conservatives chafe at the suggestion, Pope Francis accepts the notion that as many as half of Catholic marriages may be sacramentally invalid (and thus eligible for annulments) due to “defects of intent,” in which the spouse(s) do not understand and assent to the fullness of Church teaching on marriage. Given shallow catechesis and the incalculable confusion sown by the sexual revolution, I think the pope may be right.

Still, the Church cannot honestly decree that every marriage that breaks down was never valid in the first place.

The pontiff has already streamlined the annulment process which, in this country, especially, overwhelmingly favors petitioners. That is enough.

Maybe the best answer for remarried Catholics who cannot obtain an annulment is this: The Episcopal Church welcomes you. The Anglican Communion can bear disagreement over something as fundamental as the nature of marriage.

But the Church that Christ founded on Peter should avoid becoming a loose confederacy of warring regional ecclesial jurisdictions.

The Catholic Church should not negotiate away its continuity and universality to look more like Protestant sects. The Vatican has enough difficulty defending and enforcing the teachings it hasn’t backed down on. The last thing Rome needs is a Canterbury problem.

(Jacob Lupfer is a contributing editor at RNS and a doctoral candidate in political science at Georgetown University.)