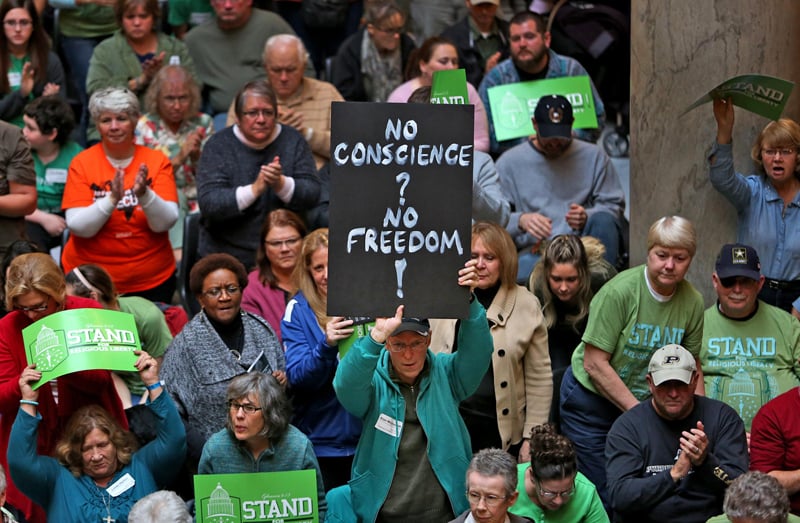 Supporters cheered speakers and waved signs during the Indiana Pastors Alliance rally at the Statehouse, on November 17, 2015. Photo by Kelly Wilkinson, courtesy of USA Today

That’s the tenor of the talk these days as powerful advocates try to write protections into law for lesbian, gay, bisexual and transgender people. Those advocates, battling against conservative Christians who are staunch in their beliefs of right and wrong, wonder why anyone would deny others their rights.

Because they feel the same way: It’s bigotry, toward them. It’s hatred, directed at them. It’s discrimination, against them.

They are the ones being bullied, they insist. In a country where the cultural tide seems to be moving away from hard-and-fast biblical prohibitions, they feel the government is abandoning them. Once at the core of American politics, some evangelical Christians feel increasingly relegated to the fringe, betrayed by their own conservative lawmakers as their cultural dominance is usurped by a smaller group wielding the heft of the media and corporations.

It is they, many argue, who are the army of freedom fighters in this debate.

The LGBT rights that others see increasingly as a matter of civil rights, some evangelical Christians see as a moral wrong. Expanded protections, they fear, would create “special rights” for LGBT people that could supersede their right to speak out against homosexuality.

To those Christians — and this is an issue that divides many Christians — LGBT rights represent the threat of government deciding where their right of religious expression “ends” so others’ rights can begin, said Arthur Farnsley, associate director of the Center for the Study of Religion and American Culture at Indiana University-Purdue University Indianapolis.

“There’s a certain degree to which people are going to be told, ‘You can have your religious beliefs and opinions. And you can practice them in your churches, synagogues and mosques. But in the public sphere, you’re going to have to deal with the greater diversity and recognize civil rights laws,’” Farnsley said.

But where will the line be drawn between religion and the public sphere?

“We’re actually here,” he said, “because we love Jesus.”

Their voices carried hymns through the state Capitol, and Johnson marveled at the sound.

“I don’t know any better place to exalt God,” he said, “than in the halls of government.”

How can government, Johnson said, force people to act against their religious consciences — against an unshakable belief that marriage is between a man and a woman?

From his worldview, the Supreme Court’s ruling to recognize same-sex marriages doesn’t change his traditional definition of the institution. He “doesn’t buy into those concepts” of sexual orientation and gender identity, saying they were created by LGBT advocates. And, for that matter, he doesn’t believe LGBT discrimination is a matter of “civil rights.”

He does not acknowledge the existence of prejudice directed at the LGBT community, saying no one is denied housing, employment or business services simply for being gay. Nor does he believe that being gay or transgender are immutable characteristics.

READ: The Christian baker who refuses LGBT couples is not a persecuted preacher

Expanding state civil rights law to include sexual orientation and gender identity would grant a special right to same-sex couples seeking marriage services, he said, while resulting in fines and other punishments for Christian business owners who don’t want to violate their beliefs.

“We’re the ones who need a special protected-class status, because we’re the ones that are being attacked by everybody,” Johnson said. “It’s humorous, the way this thing is being portrayed, because it doesn’t fit reality at all.

“I’m not asking for special protected class status. I’m asking to be left alone, for crying out loud.”

READ: How to be a Christian ally to LGBT people

He is against anything, he said, that is not in the Bible.

But the state, he said, is trying to impose different “truths.”

“It’s not that we want to force our truth onto others,” Boss explained. “We want to be able to tell our truth to others without being chastised for it.”

For many evangelical Christians, religion has no end. It permeates and informs every part of their being — who they are, and what they do. How they raise their children and how they run their businesses. It goes beyond Sundays, beyond the walls of the church.

“People say to me, ‘There’s a separation of church and state. Don’t you understand that?’

READ: Where did Indiana law come from? A brief history of religious freedom (ANALYSIS)

Government, they say, may not encroach on religion, but instead has a duty to protect it above all else.

For these evangelical Christians, who are led by the Indiana Pastors Alliance and influential conservative lobbying groups such as the Indiana Family Institute, there is no compromise. Expanding the state civil rights law to include sexual orientation and gender identity as protected classes would effectively feel like a betrayal of their constitutional rights.

“Does the government get to veto their faith?” said Peter Scaer, part of the pastors’ alliance and associate professor at Concordia Theological Seminary in Fort Wayne. “It’s not just another political issue. This is about who we are as a people. How can this country take a moral wrong and turn it into a civil right?”

To be sure, there are strong views on the other side of the issue, many of which have been reported extensively. Many evangelical Christians say they don’t trust the media, and think it is biased against them. They have been more reluctant to talk with the media than LGBT advocates in part out of fear of being cast as bigots. So they feel as if their message hasn’t received the same attention.

And not all Christians share their views. Some Christians and other religious folks agree with enacting nondiscrimination protections for LGBT people, including a coalition of mainline Christian denominations and a group of 141 faith leaders who signed onto a letter of support.

Bishop William Gafkjen, who oversees Indiana and Kentucky congregations of the Evangelical Lutheran Church in America, said he doesn’t feel that adding to the civil rights law threatens his religious freedom.

“Sometimes, because we’re yelling at each other from the extremes, we forget that freedom is already there,” he said.

For him, serving his neighbor “wins the day in the public sphere.” And he cited what his church’s founder, Martin Luther, said about the Christian shoemaker: that he honored God not by putting little crosses on every shoe, but by making the best shoes he could.

So now meet Jennifer Luedtke, 40, another member of Living Stones Church. She traveled to Indianapolis last week from her home in Hobart to stand for religious liberty, 4-year-old son Riley in tow.

“We just want to fight for the things we have,” she said.

That’s the fear that runs through this all: Religious conservatives’ cultural foothold is slipping. So on social issues like LGBT rights, “it’s always going to feel like a loss,” said Farnsley.

And if evangelicals give an inch on this, if they lose this bit of freedom, what will happen next? How far, they wonder, will their religious rights be eroded?

For Luedtke, that fear is what brought her to the Statehouse to cheer and clap and pray. That fear makes her worry about how her son will grow up.

What if he couldn’t say, “God bless you” to someone who sneezes, or voice his views on creation in school?

And, she added, “if he owns his own business, I want him to be able to serve, and not serve, whatever his conscience tells him, free from penalty from the government.”