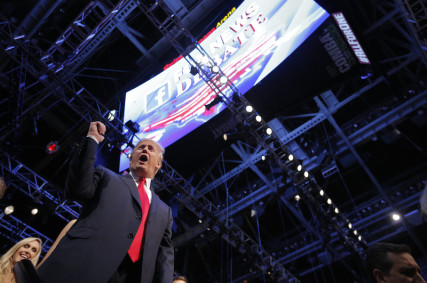 Republican 2016 U.S. presidential candidate and businessman Donald Trump, shown at the end of the first GOP debate, will be center stage again Dec. 15 for the final debate of 2015. Photo by Brian Snyder courtesy of Reuters

(RNS) Tonight (Dec.15) is the last 2016 GOP presidential contenders debate for this year with Donald Trump at center stage – again — and religion likely to color the arguments.

Many expect the stance Trump has taken on terrorism — to ban Muslims from U.S. entry at least temporarily — will be central to the show in Las Vegas  (CNN, 8:30 eastern).

That Trump’s proposal is likely unconstitutional, that it is potentially dangerous stereotyping based on religion, has already had an impact on the campaign. And it’s not what you think.

The more he ratchets up harsh talk about Muslims, the higher his ratings with Republicans and with hardline far right evangelicals such as Rev. Franklin Graham. (Never mind that Trump is a Presbyterian).

At Religion News Service, we offer a series of 5 faith facts about the candidates, written when they first entered the race and updated periodically during the campaign.

Here are links to the series and candidates’ recent comments on Muslims in the wake of the San Bernardino attack by a radicalized Muslim couple. 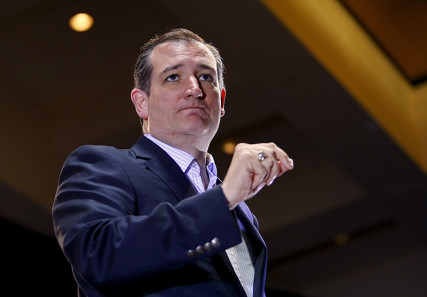 Among Trump’s GOP rivals Texas Sen. Ted Cruz — behind him in national polls but ahead of Trump in an Iowa poll of likely-caucus-goers — has held back on blasting Trump personally for this proposal.

But neither has Cruz, a Baptist preacher’s son who has assiduously courted evangelical voters, directly endorsed it. Instead, Cruz is trying to divide Muslims in general from a specific focus on “radical Islamic terrorism.” Cruz proposed to just prohibit entry by refugees from states riddled with terrorism such as Iraq and Syria.

Retired neurosurgeon Ben Carson, sliding downward in the polls after a brush with the lead in Iowa, has his own history of swiping at Muslims. He has said Islam does not align with American values.

Carson has said a ban based on religion would be unconstitutional. His idea: rather than sort refugees by their religion, the U.S. should just increase funding to keep them more comfortable in refugee camps in or near their homeland. Based on a recent visit to refugee camps in Jordan, Carson said he believes the refugees would prefer that to moving west.

Florida Sen. Marco Rubio, one of several Catholic GOP contenders, has stopped short of the ringing condemnation of Trump’s anti-Muslim talk delivered by the head of the U.S. Conference of Catholic Bishops.

However, Rubio has disparaged Trump’s plan as a bid for the limelight and he echoed President Obama in calling for Muslims in America to do more to combat “homegrown violent extremism.” 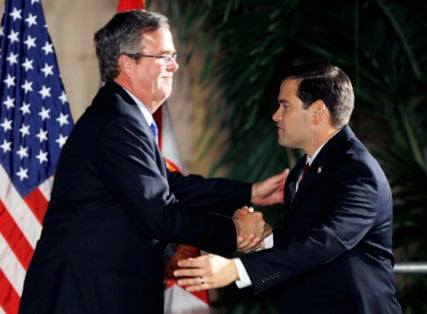 When Trump first called for the controversial ban, former Florida Gov. Jeb Bush went straight for Twitter, calling the idea “unhinged.” Bush was already on record as calling an earlier Trump proposal for a database of U.S. Muslims “abhorrent.” Even so, Bush, like Rubio, wants the Obama administration to bore in on Islamic State terrorism.

N.J. Gov. Chris Christie used Trump’s proposal to make the case (he was the state attorney general before becoming governor) that Trump has “no experience” in governance or law. He has gone on to stress his own response to the 9/11 terror attacks: he toured mosques, met with Muslims and made clear that “we have to go out and start talking to each other.”

Ohio Gov. John Kasich minced no words. Trump is “dead wrong” for disparaging Muslims, Hispanics and women. His campaign also circulated a video with a supporter likening Trump to Hitler.

Businesswoman Carly Fiorina positioned her response to highlight herself as a champion of religious freedom. In a campaign appearance in Iowa, Fiorina said Trump’s ban idea is “a violation of our Constitution, but it also undermines the character of our nation. We stand for religious liberty.”

Kentucky Sen. Rand Paul devoted much of his media attention to attacking Obama, not Trump. Paul also has his own ideas about a limited ban on entry to the US. It doesn’t specify Muslims but would suspend visas for people from countries with “significant jihadist movements.”

News
Trump and his religion advisers launch new national faith advisory board
Follow us on Facebook!
Submit your photos to RNS