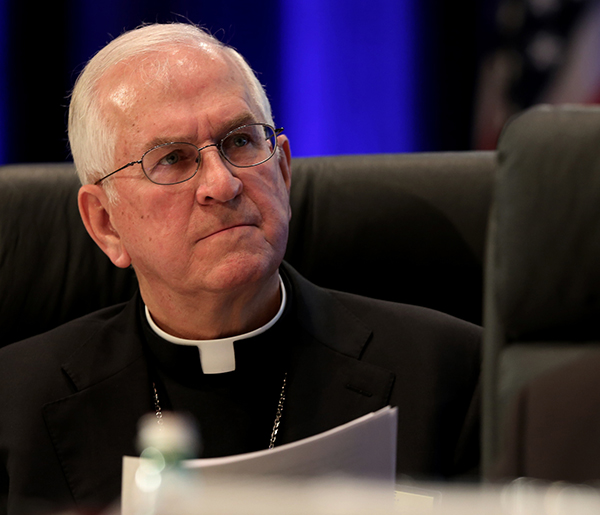 (RNS) The leader of the nation’s Catholic bishops on Monday (Dec. 14) denounced the backlash against Muslims and refugees in the wake of the mass shooting in San Bernardino, apparently by a pair of radicalized Muslims.

Americans “must resist the hatred and suspicion that leads to policies of discrimination,” said Louisville Archbishop Joseph Kurtz, president of the U.S. Conference of Catholic Bishops.

“Policies of fear and inflammatory rhetoric will only offer extremists fertile soil and pave the way toward a divisive, fearful future,” he said, while also lamenting the toll of the Dec. 2 shooting that left 14 people dead and more than a dozen wounded.

In his statement, Kurtz also decried the Nov. 27 murders at a Planned Parenthood clinic in Colorado Springs, allegedly by a gunman who may have been motivated by opposition to abortion and his Christian beliefs. Violence “can never be justified by invoking the name of God,” Kurtz said.

The thrust of Kurtz’s statement on the twin tragedies that have roiled the country and prompted fierce debates on gun violence and Islamic extremism was to counsel against anger, fear, and overreaction.

READ: Is this the first papal selfie? Alas, the viral Pope Francis story that wasn’t

In addressing the spate of violence against Muslims and Islamic targets in the wake of the San Bernardino shooting, Kurtz also appeared to take on Republican presidential contender Donald Trump and other political leaders who have proposed limiting the entry of refugees fleeing Islamic extremism or barring all Muslims from entering the U.S.

“When we fail to see the difference between our enemies and people of good will, we lose a part of who we are as people of faith,” Kurtz said. “Policies of fear and inflammatory rhetoric will only offer extremists fertile soil and pave the way toward a divisive, fearful future.”

The archbishop’s statement was notable in part because Catholic leaders have been strong defenders of religious freedom in recent years but have come under scrutiny for their quiet response to the blistering verbal and physical attacks against Muslims in recent days. A powerful statement in defense of Muslims issued last week by the archbishop of Detroit was an exception.

In addition, while many Catholic leaders lamented the San Bernardino shooting, those statements contrasted with the relative lack of response to the shooting at the Planned Parenthood clinic, which performs abortions.

Also, Kurtz’s mention of gun control was unusual because, in spite of concern expressed by a few bishops over gun violence, the U.S. hierarchy has not made the issue a priority.

Kurtz said the church prays for those who suffered in the attacks, and added that “violence and hate in the world around us must be met with resolve and courage.”

But he said Americans should not give in to fear. He pledged that the Catholic Church would continue to resettle refugees and battle “religious discrimination” against anyone.

“Let us confront the extremist threat with courage and compassion, recognizing that Christianity, Islam, Judaism and many other religions are united in opposition to violence carried out in their name,” Kurtz concluded.

September 21, 2020
Related Posts
By Simran Jeet Singh
How corrosive politics make us all less safe
By Alejandra Molina
In Oregon, churches and anti-fascists unite to provide mutual aid to fire evacuees and others in need
By Thomas Reese
Catholics should vote for Biden, says former bishops’ conference official
By Jalal Baig
Nike, don’t make me choose between Liverpool FC and the Uighurs
By Thomas Reese
Trump or Biden? What’s a Catholic voter to do?