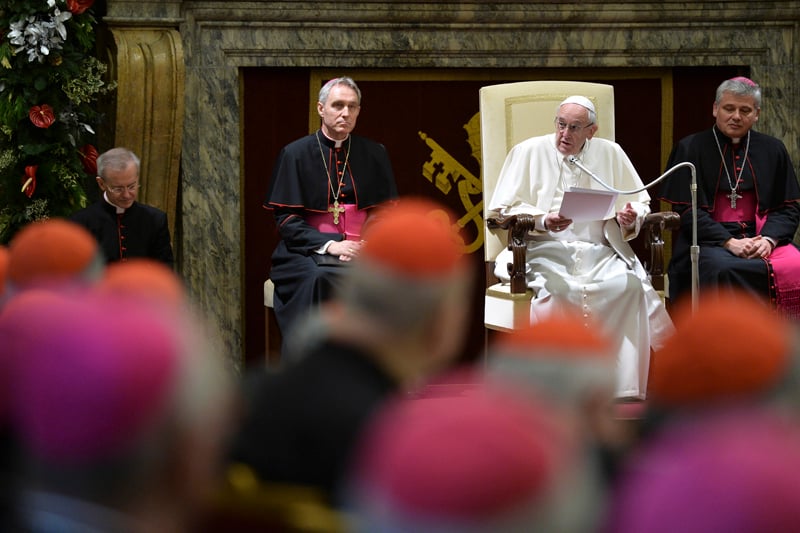 Pope Francis speaks during the traditional greetings to the Roman Curia in the Sala Clementina (Clementine Hall) of the Apostolic Palace, at the Vatican on December 21, 2015. Photo courtesy of REUTERS/Alberto Pizzoli/Pool
*Editors: This photo may only be republished with RNS-POPE-CURIA, originally transmitted on Dec. 21, 2015.

(RNS) A year after he delivered a blistering diagnosis of 15 “diseases” plaguing the Roman Curia, including “spiritual Alzheimer’s,” Pope Francis on Monday (Dec. 21) listed a 12-point “catalog of needed virtues” that the bishops and cardinals who run the Holy See should seek to follow.

But if the pope seemed to strike a lighter tone during his benchmark Christmas address — he quipped that after last year’s grim diagnosis he wanted to provide some “Curial antibiotics” — Francis made it clear he won’t let up on his drive to overhaul a church court that has been a source of both scandal and opposition to his reformist agenda.

“It seems necessary to state what has been — and ever shall be — the object of sincere reflection and decisive provisions,” the pope told the prelates gathered in an ornately decorated Vatican audience hall. “The reform will move forward with determination, clarity and firm resolve.”

Without mentioning specific headlines that cropped up in recent months, Francis pointedly referred to the “diseases” that have manifested since his last speech to the Curia, “causing no small pain to the entire body and harming many souls, even by scandal.”

Among the stories Francis could have cited were leaked documents on the Vatican’s messy finances and some excessive spending that formed the basis of two major books — and resulted in an unusual Vatican trial of three former Vatican officials and insiders for dishing the sensitive information, as well as the two journalists who published it.

Or the news this weekend that Cardinal Tarcisio Bertone, a former Vatican secretary of state, pledged to repay 150,000 euros (about $164,000) to a Roman children’s hospital that had spent 200,000 euros to renovate a grand Vatican apartment for Bertone. (Where a cardinal would secure so much ready cash was another question.)

There was also the longtime Vatican doctrinal official who came out as gay in October — announcing that he was moving to Spain to live with his partner and accusing the Catholic Church of endemic homophobia. Or the rumors in the fall that Francis was suffering a brain tumor. Or the former Vatican archbishop who died before he could be tried on charges of abusing children when he was the papal ambassador to the Dominican Republic.

So does this litany of scandals mean the pope is losing out in his reform push nearly three years into his papacy? As Roman hands are fond of saying, “Popes come and go, but the Curia lasts forever.”

It’s certainly tough to bet against history, especially when you are talking about a 2,000-year-old institution like the Roman Catholic Church. But there is a sense that this time may be different.

Take the so-called “Vatileaks” scandal: Much of the information in the books was based on reports commissioned by Francis in 2013, shortly after he was elected. As the pope himself has noted, those reports provided the basis for many of the sweeping financial reforms he has since instituted.

And other structural reforms are ongoing as well; Francis just announced a major restructuring of the notoriously inefficient and byzantine curial bureaucracy’s organization to make it more transparent and responsive to bishops around the world, rather than the other way around.

In addition, the “resistance” in the Curia can be overstated. Yes, a German newspaper last month published a sharp but anonymous critique by someone described as a former curial official who blasted Francis for a range of sins, including “authoritarianism.”

But it’s notable that the author identifies as an ex-employee: Francis continues to change Vatican personnel along with making structural reforms, and if Francis jokes about his lack of talent for administration, he knows human nature, and that people need encouragement, not just reprimands.

That’s why the pontiff this year went out of his way in his remarks to praise great work despite the bad press, and said it would be “a grave injustice not to express heartfelt gratitude and needed encouragement to all those good and honest men and women in the Curia who work with dedication, devotion, fidelity and professionalism.”

He also took care to meet separately with the lay employees who make the Vatican run. He apologized for the scandals that have dogged the Vatican and he expressed heartfelt appreciation for their work, which he said too often goes unrecognized. “We are not machines … at times we need an incentive, or a little change of pace.”

Still, nothing succeeds like time, and the question is how much Francis has — he turned 79 last week and has frequently suggested his papacy may not be long.

As papal biographer and longtime Vatican watcher Marco Politi says, the line going around Rome is that about 20 percent of the Curia are pro-Francis, 10 percent are openly opposed, “and 70 percent are waiting for the next pope.”

Those who hope to wait out the pope might have been cheered that Francis was suffering from a cold as he delivered his Christmas talk on Monday, and he apologized for sitting while he spoke rather than standing, as is his habit.

But then the pope went on to deliver his remarks in a strong voice that sent an unmistakable message, as he said the diseases of the Curia will call for “painful and prolonged interventions.”

It didn’t sound like the words of a pontiff who is ready to call it quits, or die.

Indeed, Austen Ivereigh, author of a well-regarded biography of Francis, “The Great Reformer,” says the pope “is now telling people close to him that, because of the strong resistance to the reform, he will need seven years, until at least 2020, to do what he had planned for five.”

Whether that will be enough time isn’t clear, but it certainly means there could be another five or so Christmas talks that are likely to make news.