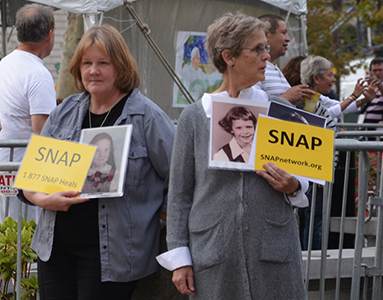 Becky Ianni, left, and Barbara Dorris, patiently wait outside the Cathedral of St. Peter and Paul in Philadelphia, to share their stories of sexual abuse by clergymen. Both women say the positive atmosphere around Pope Francis has clouded the attention they so desperately seek. Religion News Service photo by Taylor Nakagawa
December 22, 2015
Reuters 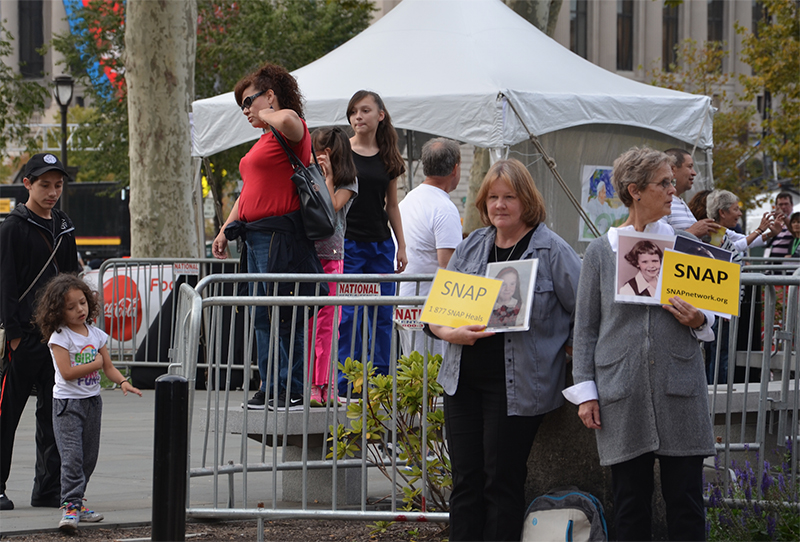 Becky Ianni, left, and Barbara Dorris wait outside the Cathedral of Sts. Peter and Paul in Philadelphia to share their stories of sexual abuse by clergymen. Both women say the positive atmosphere around Pope Francis has clouded the attention they so desperately seek. Religion News Service photo by Taylor Nakagawa

PHILADELPHIA (Reuters) -- A Pennsylvania appeals court on Tuesday (Dec. 22) ordered a new trial for a Roman Catholic priest who was convicted in a landmark case of mishandling reports of child sex crimes.

The Pennsylvania Superior Court found that Monsignor William Lynn of Philadelphia did not receive a fair trial because a trial judge allowed jurors to hear too much evidence about the wrongdoing of priests who had abused children.

Lynn, who once oversaw the work of 800 priests in the Philadelphia Archdiocese as secretary of the clergy, was sentenced in 2012 to three to six years in prison for failing to supervise a priest accused of sexual misconduct who later sexually assaulted a 10-year-old boy.

At the time of his conviction, he was the highest-ranking Catholic priest to face charges for covering up abuse by priests in the Catholic church, and his trial refocused attention on a sex abuse scandal that has roiled the faithful across the United States and undermined the church's moral authority around the world.

Victims groups decried the court's decision, saying Lynn was a key part of a Catholic hierarchy that put the careers of priests above the safety of children.

READ: 'Spotlight’ draws a curious -- but no longer outraged -- crowd

"This ruling rubs salt into already deep and still fresh wounds of Philadelphia Catholic and victims. It also emboldens those who are hiding or are tempted child sex crimes," David Clohessy, the director of the Survivor's Network of those Abused by Priests said in a statement.

The decision marks the second time that Lynn's conviction was overturned. He was released from prison in 2013 after serving 18 months after a state appeals court found that he was not responsible for the welfare of children, a decision that the state's highest court reversed.

Lynn's legal team is expected to ask that he be released from prison soon.

"It's the right decision, I'm pleased with it," said Thomas Bergstrom, Lynn's lawyer.

The Philadelphia district attorney's office can appeal the ruling. The office said in a statement said it had not decided whether to do so.