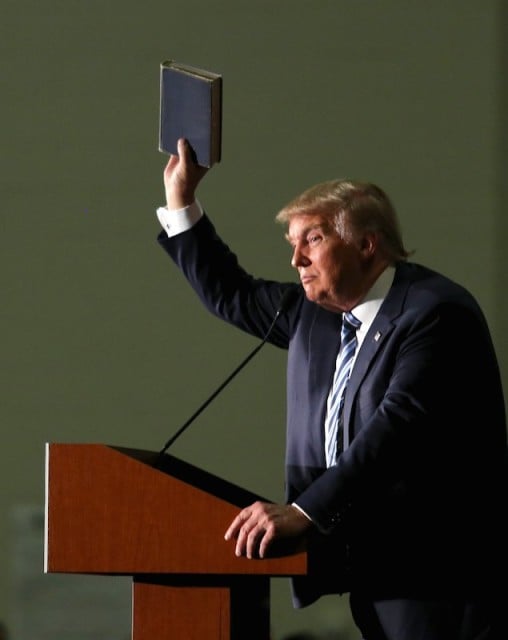 U.S. Republican presidential candidate Donald Trump holds up a copy of the Bible he said his mother gave him as a youth during a campaign rally in Council Bluffs, Iowa, on December 29, 2015. Photo courtesy of REUTERS/Lane Hickenbottom
*Editors: This photo may only be republished with RNS-TRUMP-LIBERTY, originally transmitted on Jan. 5, 2016.

(RNS) Only seven contenders will be on the main stage for Fox Business News’ broadcast of the sixth GOP 2016 presidential debate Thursday (Jan. 14) — almost all well-known for taking strong stands on faith in hopes for a boost from devoted viewers.

The December debate was the third-most-watched one in debate tracking history, according to CNN. The theme of this week’s debate will be economic policy, with managing editor for business news Neil Cavuto and global markets editor Maria Bartiromo asking questions.

Watch for candidates to tie their economic views to biblical morality. Most of the debaters are making a strong push for religious viewers, known for high turnout on Election Day.

How strong? Well, there’s Florida Sen. Marco Rubio pitching to Iowa evangelicals with an altar call to Christ in his latest video ad.

And Donald Trump, who collects Bibles, has taken to waving one at campaign events. He’s scheduled to speak at evangelical powerhouse Liberty University on Jan. 18.

Texas Sen. Ted Cruz is not only working the ground game hard with pastors and Christian home-schoolers in Iowa; he’s even pushing for faith voters in New Hampshire, where people with no religious identity (36 percent) are the single largest “religious group,” while evangelicals (13 percent) lag well behind Catholics (26 percent) and mainline Protestants (16 percent).

As Cruz and Rubio climb in the polls, it appears Ben Carson has lost his early grip on evangelical voters who once formed his base.

While Iowa may be uncertain for New Jersey Gov. Chris Christie and Ohio Gov. John Kasich, few have spent more time in New Hampshire than these two.

Former Florida Gov. Jeb Bush is sliding in the poll but still made the main-stage cut, just ahead of Kasich, by a statistical wing and a prayer.

Carly Fiorina and Sen. Rand Paul have fallen to the second-tier debate. Paul, still hoping to be reinstated to the main stage, has said he won’t participate. But Fiorina will join former Arkansas Gov. Mike Huckabee (the only Southern Baptist pastor in the race) and former Sen. Rick Santorum, who once said the idea of church-state separation made him want to vomit.