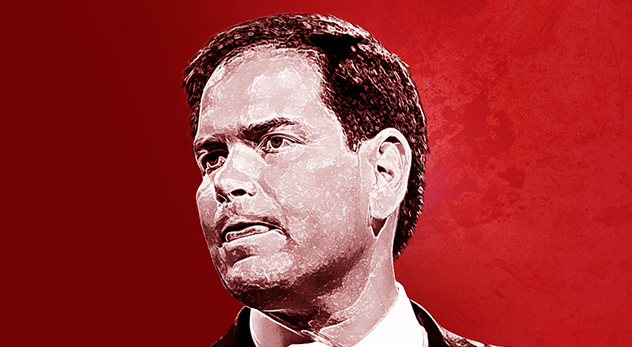 Rubio states that he tries to let his faith in Jesus "influence me in everything that I do." Is this message too little, too late for religious voters in Iowa? (Image: http://bit.ly/1OgYEre)
January 8, 2016
Jonathan Merritt

Rubio says that he tries to let his faith in Jesus "influence me in everything that I do." Is this message too little, too late for religious voters in Iowa? (Image: http://bit.ly/1OgYEre)

“Our goal is eternity…to accept the free gift of salvation offered to us by Jesus Christ.”

It sounds like an evangelist’s altar call, but these words were actually spoken by Republican presidential hopeful Marco Rubio in a new “faith” ad. The 30-second spot is airing in Iowa and was first released to David Brody, news chief for the Christian Broadcast Network, which was founded by televangelist Pat Robertson.

The advertisement is part of the Rubio campaign’s effort to ramp up religious outreach, which includes an advisory council comprised of prominent faith leaders. The Florida Senator has made gains in Iowa polls, but still trails both Donald Trump and Ted Cruz by double digits. Can his push to capture conservative Christians help him get his presidential groove back?

The Rubio campaign hired millennial evangelical Eric Teetsel to serve as director of faith outreach in November 2015. Some liberals were unsurprisingly upset by the appointment due to Teetsel’s history of outspoken activism on issues like abortion and LGBT rights. (He co-authored a 2015 book, Marriage Is, that argued marriage should only be between one man and one woman.) But the bold hire showed that the Rubio campaign was getting aggressive about reaching out to conservative evangelical and Roman Catholic voters.

Although Rubio does not wear his religion on his sleeve like some other Republican presidential hopefuls, Teetsel feels that the Florida Senator should be an easy sell to believers.

“Senator Rubio brings together rock-solid conviction, statesmanship, and a serious and creative approach to policy and communicates it with a winsomeness that is optimistic and inspiring,” Teetsel says. “For religious voters, the manner in which he allows his biblical worldview to shine through without trading on it for political gain is both encouraging and refreshing.”

Perhaps the most interesting board member is megachurch pastor Rick Warren, author of the bestselling book, The Purpose Driven Life. After his church hosted a 2008 faith forum with then Senator Barack Obama and Senator John McCain and public support of California’s anti-gay marriage bill, the pastor seemed to pull back from political involvement. So Warren’s appointment to Rubio’s advisory board, while not technically an endorsement, is significant.

But Rubio’s efforts to capture believers' support will be all for naught if he can’t win early primaries. The first contest takes place February 1 in Iowa, a state where faith matters more than most. Senator Rubio’s support in Iowa, according to poll averages, is currently at 12.5 percent, while Donald Trump is at 28.4 percent and Ted Cruz is at 30.8 percent. So Rubio needs a rapid infusion of support from voters in that state.

He got no help from religious right leaders who met in secret last month outside of Washington, DC and decided to endorse Senator Ted Cruz instead (though Rubio reportedly came in a close second place). Leaders at the meeting included Tony Perkins of the Family Research Council, Founder of Focus on the Family James Dobson, and Jonathan Falwell, pastor and son of the late Jerry Falwell.

When asked how the campaign reacted to Rubio being passed over by these leaders, Teetsel replied flatly, “People are free to support whomever they want.”

Instead of begging for blessings from evangelical culture warriors, the Rubio team has decided to appeal directly to Iowa voters. And that’s where the new “faith” ad comes in. It's a mishmash of religious beliefs and Bible verses, but is surprisingly cogent.

“The purpose of our life is to cooperate with God’s plan, to those who much has been given much is expected and we will be asked to account for that,” Rubio states in the advertisement. “Were your treasures stored up on earth or in Heaven? And to me I try to allow that to influence me in everything that I do."

Rubio’s Christianity should come as no surprise to anyone. He is a practicing Roman Catholic, and his family reportedly frequents an evangelical mega-church in Florida. Campaign insiders say the Senator sees Sunday as a “day of rest” and flies home from campaigning most weekends to attend mass and be with his family.

While the sentiments expressed in the Iowa ad might be off-putting to some less conservative mainline Christians, Jews, and non-religious voters, they seem to be true to who Marco Rubio is. And, more importantly, they are exactly the type of talk that evangelicals and conservative Catholics respond to.

The hiring of Teetsel, the appointment of the religious liberty advisory board, and the release of this new advertisement are all positive steps toward persuading the faithful. But they may be too little, too late for Iowa. Gaining the 20 percentage points Rubio needs in Iowa in less than three weeks would be nothing short of a miracle.