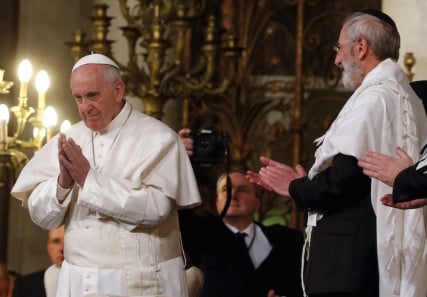 Pope Francis gestures at the end of his visit at Rome’s Great Synagogue, Italy January 17, 2016. Photo by Alessandro Bianchi courtesy of Reuters

ROME (RNS) Pope Francis stressed the “irrevocability” of God’s covenant with the Jews and cited the Holocaust as a reminder of the ongoing need to combat violence as he made his first visit to Rome’s main synagogue on Sunday (Jan. 17) amid tight security.

“Violence by man against man is in contradiction with any religion worthy of that name, and in particular with the three great monotheistic religions,” Francis told a crowd filling the Great Synagogue just down the Tiber River from the Vatican. “Life is sacred, a gift of God.”

“Every human being, as a creature of God, is our brother, regardless of his or her origin or religious affiliation,” he said, calling on Christians and Jews to “put into practice the logic of peace, of reconciliation, of forgiveness” in the Middle East and elsewhere.

Francis noted that thirty years ago this April, Saint John Paul II became the first pontiff to visit a synagogue when he came to Rome’s temple, and six years ago Pope Emeritus Benedict XVI also visited.

Those visits, and his own on Sunday, Francis said, are evidence of the “transformation” in Catholic-Jewish relations that has taken place since the reforms of the Second Vatican Council 50 years ago.

Video of the pope visiting the Rome synagogue:

In Rome itself, until the mid-19th century, Jews were forced to live in the quarter adjoining the synagogue, an area still known as the Ghetto, and make compulsory payments to the popes.

And in 1943, as Francis noted, over a thousand men, women and children Rome’s Jewish community were deported to Auschwitz.

Paying tribute to the victims and survivors, some of who were in attendance, Francis said that despite all the progress, Christians and Jews must to continue to develop the “unique and special bond” between the two communities.

“From enemies and strangers we have become friends and brothers,” said Francis, who as an archbishop in his native Argentina fostered close relationships with the Jewish community.

“From a theological point of view, it is clear there is an inseparable bond between Christians and Jews,” he continued, “and the church, while professing salvation through faith in Christ, recognizes the irrevocability of the covenant and God’s constant and faithful love for Israel.”

The question of whether God’s covenant with Israel is still valid — or whether it was supplanted by Jesus, who Christians believe was the Messiah — has been a source of theological debate among Christians and a concern for Jews. Another key point is whether Jews must convert to Christianity.

During his visit John Paul stated, as Francis reiterated on Sunday, that the covenant “had never been revoked,” and last month the Vatican’s Commission for Religious Relations With the Jews published a document in which the Holy See said Catholics should not try to convert Jews.

That report followed celebrations last year to mark the 50th anniversary since the signing of an unprecedented document on Catholic-Jewish relations, titled “Nostra Aetate.” The Vatican II text rejected the notion that Jews were responsible for Jesus’ death, a belief which is said to have contributed to historic persecution of Jews.

But the Vatican decision to develop legal and diplomatic ties with the Palestinian Authority has also criticism from Israel and many in the Jewish community. The Vatican-Palestinian agreement came into force earlier this month and backs a two-state solution with Israel.

The Pope traveled to Israel and the Holy Land in 2014, just over a year into his papacy, visiting Jerusalem where he prayed at the Western Wall.

On Sunday, Francis was greeted with applause as he walked into the Great Synagogue and received a standing ovation after stating the importance of remembering the victims of the Holocaust.

Despite the pontiff having to travel just a few minutes from the Vatican to reach Rome’s Jewish quarter, the visit took months of planning and the neighborhood was in lockdown on Sunday. Hundreds of police were brought in to secure the area so that the pontiff could walk freely outside the synagogue and greet members of the Jewish community.

He also paused as flowers were laid by two monuments, one to Holocaust victims who were deported in 1943 and another to a boy who was killed during a terrorist attack on the synagogue in 1982.

The pontiff is well-known for his strong ties to the Jewish community of Buenos Aires and in 2010 published a book with Argentine rabbi Abraham Skorka.

Ahead of Francis’ visit to the synagogue, Skorka highlighted the pope’s “special bond” with the Argentine Jewish community, praising the pontiff’s “profound commitment to relations with it and through it with Judaism as a whole.”

The chief rabbi of Rome, Riccardo Di Segni, who also greeted the pope on Sunday, said the occasion came “in a very dramatic moment” for the world.

“There is violence inspired and sustained by distorted visions of religion. What we want to demonstrate is that we can keep our differences, building a better world, not destroying the world,” he told Catholic News Service ahead of the pope’s visit.